Thanks to our governor, Charlie Baker, and the Kraft family, Massachusetts was able to acquire thousands of masks for health workers all over the state.


"Baker said Massachusetts is the first state in the country to create such a tracking program, which will be staffed by roughly 1,000 people who will contact patients to check on their recent activities and confirm they have not spread the highly infectious illness. “The call center will get contact information for as many people as possible, that they have come in contact with, and potentially exposed,” Baker said. “People will be contacted and informed, so that they can stay healthy, isolate when appropriate, and prevent further spread.”

Partners-In-Health, the Boston-based nonprofit that is teaming up with the state government, has done public health interventions during previous crises such as Ebola and will oversee hiring, training and supervision of the virtual call center. Joia Mukherjee, the group’s chief medical officer, said the effort will help people “to isolate themselves” if they appear at risk and will reach out to people who may have contracted the virus but appear asymptomatic."

In a long ago time, in a country that once had a conservative political party -- before the present GOP lost its mind and decided that a serial adulterer, liar, cheat, fraud, and malignant narcissist would be a great representative of Conservatism, the Republican Party would have been begging Charlie Baker to run as their presidential nominee.

Baker is the most popular governor in America. He has an 84% approval rating in one of America's bluest states, and he has NEVER supported Trump. Why? Because Baker is an honest, decent, and competent public servant.

But because the current GOP has been taken over by cultists, it will continue to favor a rotten-to-the-core damaged, incompetent man-child instead of a Republican who puts his people before himself.

Bravo, Governor Baker. Proud to have you as my governor!

Posted by Shaw Kenawe at 6:30 AM 7 comments: Links to this post

If you watch and listen to FAUX NOOZ, you'll die!

This is trump's go to cable news for "alternative facts."

Jared Kushner is a guy with zero experience in pandemics or healthcare itself and with at least 3 LARGE failures in his business life. The only reason he was appointed by trump is that he's trump's son-in-law. What could go wrong with letting another incompetent run the Covid-19 response?

Oh. This, for one miserable example:

This is the front page of the Federal Strategic National Stockpile website:

So, did the Department of Health & Human Services just change the homepage of the Strategic National Stockpile’s mission to conform with wonderboy’s notion that the Feds are only a back-up to the States? Obviously Kushner is too lazy and too incompetent to even bother to look at what the SNS says on its own website. And trump put this putz in charge of the Covid-19 respons?

"Kushner has succeeded at exactly three things in his life. He was born to the right parents, married well and learned how to influence his father-in-law. Most of his other endeavors — his biggest real estate deal, his foray into newspaper ownership, his attempt to broker a peace deal between the Israelis and the Palestinians — have been failures."


I didn't vote for 45, but I'm pretty sure those who did, didn't count on the "Z" team running the game. And "the Z team" is a perfect term to describe what trump has put in place to deal with this pandemic.

A "Z" team by my definition means a team or group that is easily influenced by rumors, gossip, misinformation, and lies -- and Zers believe what other people tell them instead of knowing facts.

THIS IS OLD BUT APT 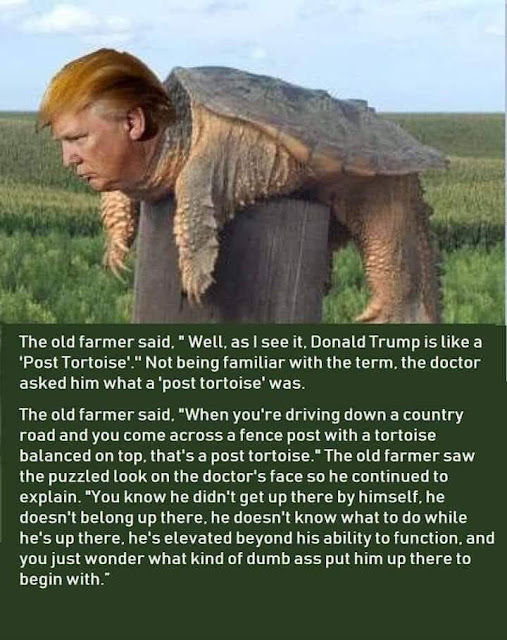 Posted by Shaw Kenawe at 11:59 AM 2 comments: Links to this post

"For Trump supporters, let me make one thing VERY clear! For the record NO ONE is blaming the President for the virus. Let me repeat. Coronavirus is not Trump’s fault.

Here’s a detailed list of what we are blaming him for:

* Trump declined to use the World Health Organization’s test like other nations. Back in January, over a month before the first Co-vid19 case, the Chinese posted a new mysterious virus and within a week, Berlin virologists had produced the first diagnostic test. By the end of February, the WHO had shipped out tests to 60 countries. Oh, but not our government. We declined the test even as a temporary bridge until the CDC could create its own test. The question is why? We don’t know but what to look for is which pharmaceutical company eventually manufactures the test and who owns the stock. Keep tuned.

* In 2018 Trump fired Homeland Security Advisor Tom Bossart, whose job was to coordinate a response to global pandemics. He was not replaced.

* In 2018 Dr. Luciana Borio, the NSC director for medical and bio-defense preparedness left the job. Trump did not replace Dr. Borio.

* In 2019 the NSC’s Senior Director for Global Health Security and bio-defense, Tim Ziemer, left the position and Trump did not replace the Rear Admiral.

* Trump shut down the entire Global Health Security and Bio-defense agency. Yes, he did.

* Amid the explosive worldwide outbreak of the virus Trump proposed a 19% cut to the budget of the Centers of Disease Control and Prevention plus a 10% cut to Public Health Services and a 7% cut to Global Health Services. Those happen to be the organizations that respond to public health threats.

* In 2018, at Trump’s direction, the CDC stopped funding epidemic prevention activities in 39 out of 49 countries including China.

* Trump didn’t appoint a doctor to oversee the US response to the pandemic. He appointed Mike Pence.

* Trump has on multiple occasions sowed doubt about the severity of the virus even using the word hoax at events and rallies. He even did it at an event where the virus was being spread. Trump has put out zero useful information concerning the health risks of the virus.

* Trump pretended the virus had been contained.

* Trump left a cruise ship at sea for days, denying them proper hospital care, rather than increase his numbers in America.

Repeat. We do not blame Trump for the virus.

We blame him for wasting taxpayer money on applause lines at his rallies (like The Wall).

We blame him for putting his own political life over American human life.

I hope this clears things up."

The Lincoln Project, a group led by George Conway.
Posted by Shaw Kenawe at 6:30 AM 11 comments: Links to this post 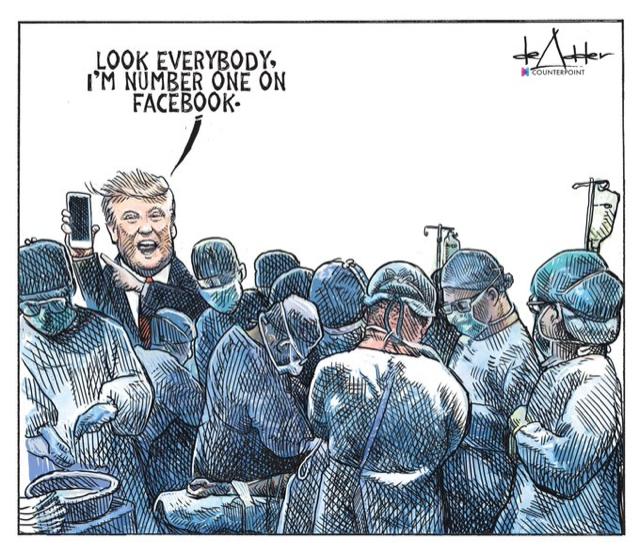 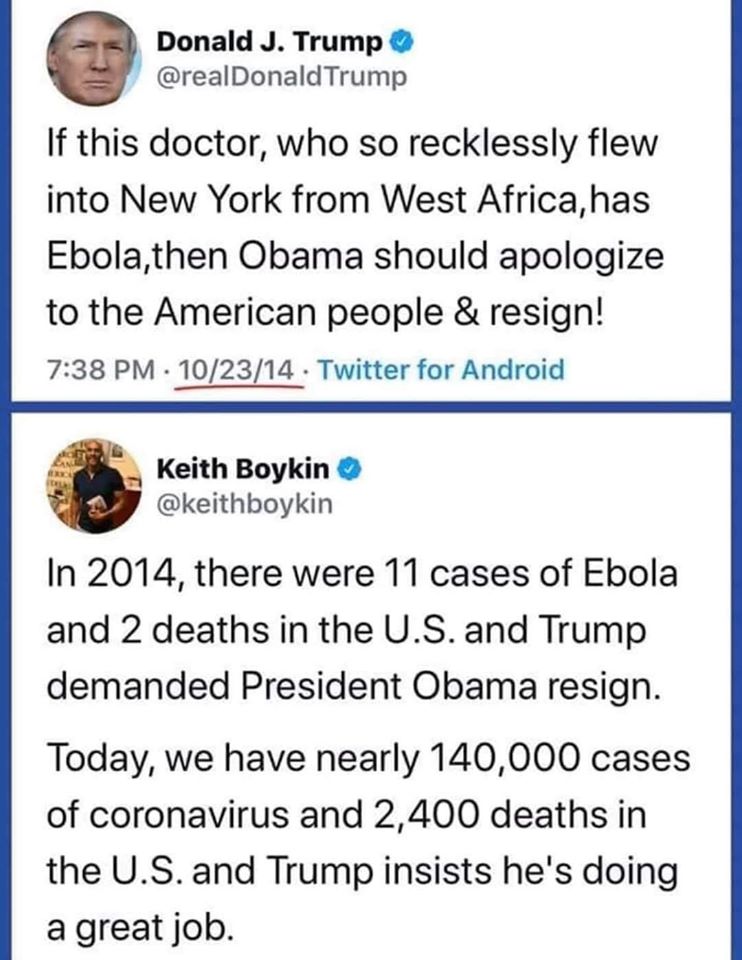 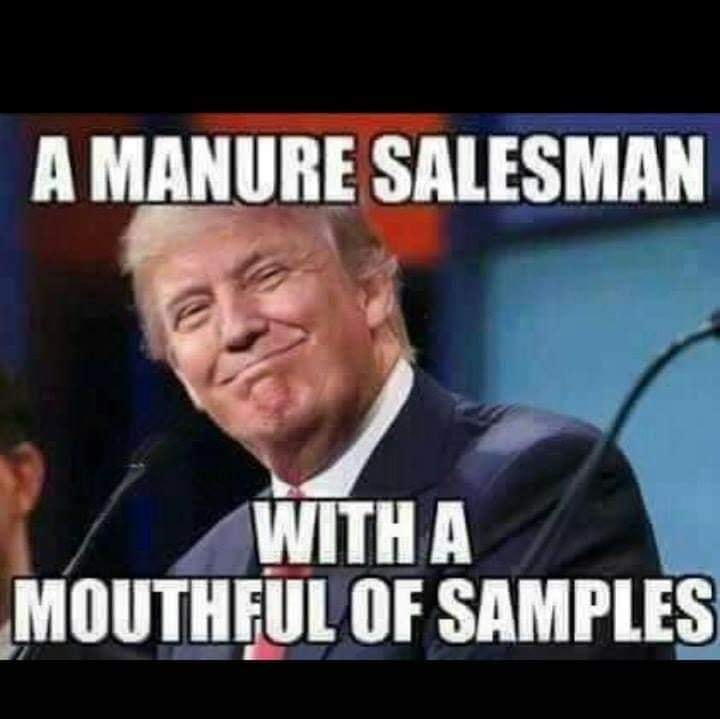 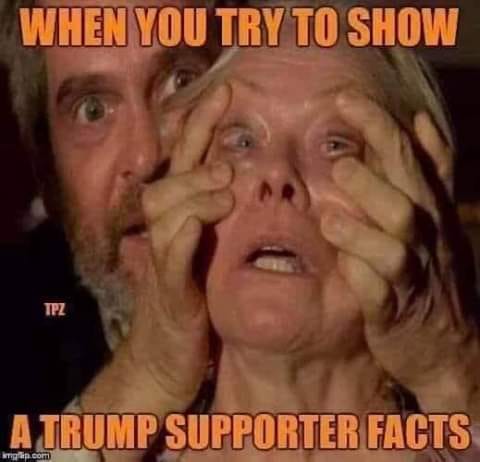