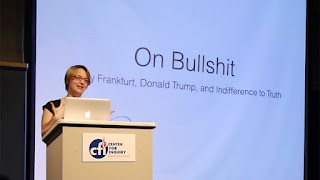 President Trump attacked wind power during a rally in Iowa — a state that gets nearly a third of its energy from wind, a higher percentage than any other state in the country

Trump blasted wind power during a rally in Iowa Wednesday night, despite the state getting nearly a third of its power from the alternative energy source. During his speech in Cedar Rapids Wednesday night, Trump said he was bringing back coal, highlighting a coal mine that opened in Pennsylvania last month.


“I don’t want to just hope the wind blows to light up your homes,” he said.


NOTE:  Lord Dampnut apparently knows nothing about batteries and the storage of energy produced by wind. His ignorance is quite appealing to the mobs that attend his rallies. --S.K.

Iowa gets almost a third of its energy from wind, the highest percentage of any state.

This president can continue to hold campaign rallies and convince himself that those who show up actually represent the vast majority of the country, but they don't.

Defending his hiring of billionaires, Donald Trump held a re-election rally in Iowa, and made controversial comments about low-income Americans in the process.


During the Iowa Rally on Wednesday, Trump suggested creating law enacted in 1996


Known as the Personal Responsibility and Work Opportunity Reconciliation Act of 1996 (PRWORA), the legislation was passed during the administration of former President Bill Clinton and said that an immigrant is “not eligible for any Federal means-tested public benefit” for 5 years, which starts on the date the immigrant enters the country.


Lord Dampnut's Iowa rally was a success if success means spreading more Trumpian bull$h!+ and having mobs of supporters eat it up.

"The Liar-in-Chief was in Cedar Rapids, Iowa last night spewing out lies while the crowd cheered with wild applause. Trump told his followers that “I love all people, rich or poor, but I just don’t want a poor person in my cabinet. Does that make sense? Does that make sense? I want people that are great and have brilliant business minds. I do not want poor people in charge of the economy”. Trump went on to say that “I believe the time has come for new immigration rules which say that those seeking admission into our country must be able to support themselves financially and should not use welfare for a period of at least five years”. Does Trump realize that president Clinton signed into law in 1995 that is still the law of the land that non-citizens are prohibited from using welfare benefits? I concur to my friend on Facebook, Tom Degan, when he states that we are living in an “Idiot Nation”.

"...Trump won his election precisely through the vaguest of bullshit? What jobs plan did the sitting president ever proffer as a presidential candidate? His "aggressive focus" on job creation was merely to announce that he would create jobs. They'd be the best jobs, and there would be millions of them.

Such twaddle was enough to energize the Republican base. And it remains enough to keep them energized. As CBS News reports on Trump's Iowa rally last night, his fulminations were "riddled with reversals and contradictions," they were "littered … with factual inaccuracies," they were fraught with "hyperbole" and "oft-repeated false claim[s]." And they "received applause nevertheless."

For Trump understands the essence of modern American democracy, which is that bullshit works — the vaguer and more partisan, the better...

Partisan "leadership" and partisan specifics are nothing compared to partisan bullshit. This, Trump has demonstrated with keen consistency. He has demonstrated that fantasies work, that fantasies are the essence of modern American democracy. That's my opinion, and I'm sticking to it. I suspected as much before Georgia's special election, and I'm convinced of it now."


I'd like to add to PM Carpenter's observation on Trump's bullshit.

You need gullible and ill-informed people to appreciate the bullshit and to eat it up. Trump has his base --30 percent of the voting public -- that enjoys every morsel of b.s. he feeds them. They think it's cake.

He's also The Bluffer In Chief...

Check this out... after months of reporting from both, and in this case, even the right leaning media, numerous interviews, articles and even direct evidence in the public domain, I saw this comment from one of our favorite bloggers this am...

"Flynn is a “paid foreign agent” or WAS!? Wow, that’s nothing i’ve heard…can you link something? I thought all he’d done was make a few speeches in Russia….?? but AGENT?"

Wow, the person did not know that? How is that possible with all the talk and reporting on it since November?

They may indeed be gullible and ill informed, but if that is true, it is because they choose to be. Period.

And as if this makes it better, in true Skudrunnerian form, they almost say it's okay anyways because Obama, Hillary, Chelsea, Bill, Holder, Valerie Jarrett or some other Democrat did it first.

As if that would make it okay, even if there was evidence of such...

Once again, I quote Bugs Bunny... "What a maroon!"

Dave, If all they watch is FAUX NOOZ and all they listen to is rabid right wing radio, they would not have heard that Flynn broke the law when he did not tell the transition team that he was a foreign agent. As a retired military officer, he is prohibited from representing a foreign country! He broke the law on that as well.

They are willfully ignorant and, as I've said before, they live in a cement bubble. Nothing that does not agree with their far right ideology every gets into the bubble, so they never have all the facts, but that doesn't prevent them from being so very smug in their appalling ignorance.

As to their ignoring Trump's atrocious personal behaviors, his incessant lies, and his scams and frauds, what is there to say except that "hypocrite" isn't a sufficiently strong enough word to describe their sanctimonious mendacity.

RN I've been away from the internet and teevee most of the day. So Lord Dampnut was bluffing when he suggested there "may" be tapes of his and Comey's conversations? What a foolish man-child he is. That's a tactic that weak and stupid bullies use to intimidate people they can't get to. Scare 'em with threats. 'Cause Little Donnie had nothing else.

Gawd! What a greasy little rodent he is.

I wonder if Lord Dampnut has been following the advances in storage battery technology. It's been dramatic but he has this fixation on coal which I don't understand.

The mine opening in Pennsylvania is extracting a specialty coal for the steel industry. It's not a sign that coal power generation is making a comeback. The more President Happy Hands implies that he's going to bring back former levels of coal mining the more ground we lose taking advantage of the improved technology and price drop of renewables.

Otherwise his Iowa speech was loaded with the usual lies. I notice that Dampnut fired a pre-emptive volley for his zombies warning them that the media would call him a liar. Sure bet.

Claiming the Paris agreement is binding is my favorite. I don't think that would even pass muster on the mothership.

I hope Trump gave his speech toward a nearby Iowa wind farm. Then at least it would produce some benefit.