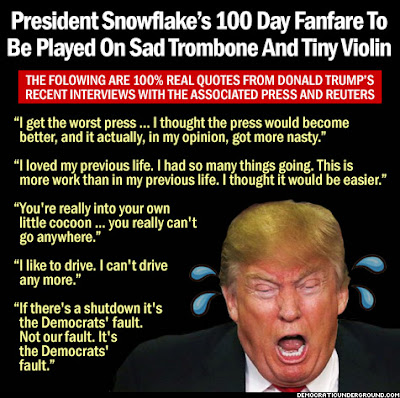 Little Donny Tiny Hands once again reveals the depth of his intellect and degree of self absorption.

RN, Reince Preibus announced recently that Little Donny wants the libel laws changed so that he can go after the newspapers that write mean things about him. I'm not kidding about this. Trump claims the media lies about him. Imagine that claim coming from the biggest liar who we Americans have had to suffer as POTUS!

Also, this weekend, he stopped the president of Argentina from bestowing that nation's highest honor to a foreigner -- Jimmy Carter -- for his support of human rights during the late '70s and early '80s in that country. Trump's people would not allow President Macri to do the honor because of "scheduling conflicts."

One thing we all know for sure: No nation will ever reward Trump for upholding human rights. There is a possibility that he may be recognized in other countries for the horse's ass that he is, though.

Speaking of fake news, here's a give and take over at the mother ship today:

Z: The headlines at various home pages read different permutations of: “Mike Pence ‘I thought I’d be president by now…I’ll wait'” I fell for this (didn’t see ‘satire’ until I sat here STUNNED after reading the article, thinking I have to write to my friend who knows Pence’s right-hand man and ask her!) ….the headline reads like that and most people do NOT read, they just see the headline and believe it. THIS is what I’d say is REPULSIVE, THE most horrible way to screw Trump, not just FAKE NEWS.

Someone should tell Queen Bee that attitude is just going to encourage talented satirists like Borowitz.

Meanwhile Lord Dampnut is busy trying to push through a big tax cut so he can finance his war with North Korea.
It was just announced that he's invited the fascist president of the Philippines to the White House. No scheduling conflict there.

Ducky, I would never expect certain people like you-know-who to understand satire. The Mother Ship of Fools doesn't have the intellectuals ability, IMO, to do so. Also, they're humorless cranks.

Trump talked the Argentine government out of giving an award to our elderly past president, Jimmy Carter, but Trump is welcoming a murderer, Philippine president Duerte with open arms.

That makes perfect sense, since we've seen ample evidence that Trump admires thugs, murderers, and authoritarians. He's attracted to thuggish strongmen because of a lack of something essentially human in himself.

Also, Lord Dampnut actually believes that Xi of China stopped being a currency manipulator the minute he won the election. Xi is going to play Trump like a cheap violin. He's already done so.