The Electoral Map as it looks now: 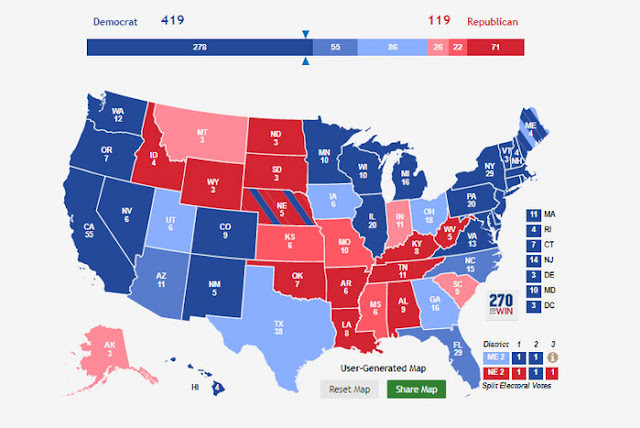 There has been a lot of discussion in political circles about Donald Trump’s job-approval ratings, what they portend, and Trump’s Electoral College strategy for 2020, which doesn’t necessarily require a popular-vote plurality. But in the end, of course, the conjunction of the Electoral College with Trump’s state-by-state popularity is where the deal will go down.

The online polling firm Civiqs has published a new set of state-by-state job-approval ratings for Trump as of August 11, and it shows how the president’s overall standing (a 43 percent approval rating nationally, which happens to match the current RealClearPolitics polling average) might translate into electorate votes. It’s not a pretty picture for the president, to put it mildly.

If that were to represent how the 2020 elections turn out, Trump would have a booming 119 electoral votes. And it’s not as though he’s on a knife’s edge between victory and defeat in all these Trump 2016 states where he’s doing poorly: He’s underwater by 12 points in Pennsylvania, 11 in Michigan, and nine in Arizona, North Carolina, and Wisconsin. And there’s virtually no indication that states that narrowly went for Clinton in 2016 are trending in Trump’s direction:

His approval ratios are minus 18 in Colorado, minus 15 in Minnesota, minus 12 in Nevada, and minus 27 in New Hampshire.

These are, by the way, polls of registered voters, not just “adults,” so they should be a relatively sound reflection of the views of the electorate.
Posted by Shaw Kenawe at 8:53 AM

I saw that article too. Still a long long way to go and let's not forget the Dems ability to mess it up with a bad candidate.

Dave, even a "bad" Democratic candidate would be far better than what's disgracing the Oval Office now. But who among the Democratic candidates is "bad?" I've heard this sort of complaining about the Dems not having anyone to beat Trump, but we're not near the election yet. I'll take that seriously in the summer of 2020. By then we'll know who are the stronger Dems.

How does anyone see Trump winning? His numbers are dismal, and the voters who changed over to him from the Dem side are fed up with him. All he has is his base. Period.

How does anyone see Trump winning?

Trump could still win if enough people stupidly vote for a third candidate instead of for the Democrat, especially in swing states. Aside from that, it seems very unlikely.

You'll probably get a few troll comments mocking the fact that Texas is blue on the map. Yes, people have been speculating about Texas going blue for several elections now, and it hasn't happened -- yet. But Republican margins of victory there keep getting smaller and smaller, and Trump is alienating suburbanites like no President before him. Texas has some of the best opportunities for us to pick up more House seats next year. Several House Republicans from Texas are retiring. They see the writing on the wall.

"Anonymous said...
Ms.Shaw, looks like you're whistling past the graveyard. Your comment sounds exactly what was said in 2016.

Anonymous, those people who crossed over from voting Dem to Repub in 2016 were looking for "something different," or "an outsider." What they got is an ignorant, malignant narcissist who's bungled everything he's touched and is an embarrassment to America. Trump is now a known quantity, unlike in 2016. If the states like Penn., Wisc., and Mich. were just a point or two negative, that'd be a reason to not believe, but those states a double-digit negative for Trump.

You also ignore the fact that the longer Trump is president, the more he'll do damage to himself with his white supremacist Tweets and moronic bund rallies with his cultists. America is disgusted with him, and his cultists are diminishing in number.

Whaat does Dave mean by a "bad" Democrat? Hillary wasn't a great candidate, but she sure was more experienced then Trump was and every goddamn person know she wouldn't have embarraseed America during G-20 meetings or meeting with any foreign leader. She certainly wouldn't have tweeted like a drunken fool like the present POTUS. She wasn't perfect anfd she nade mistakes but we'd have been a better country at this point then we are with the failure whose there now!

Fed Up... I don't think I said a Bad democrat. I said a bad candidate. Some people are just unable to mount an aggressive effective campaign. HRC is a great example of a qualified person who ran a mostly uninspiring campaign. John Kerry, another fully qualified person, should have been able to win in 2006, but he too was uninspiring.

Clinton in 1992 was not the most prepared guy to be President, but he was the best candidate the Dems had, he won the primaries and beat Bush the Elder.

I just don't believe a D after your name is going to guarantee a win for the Dems in 2020. It's going to take a candidate who can explain and sell his/her vision to America in a way that excites people and gets them to the polls.

In short, a great candidate.

Is Texas trending blue before or after his sociopathic performance in El Paso?

Trumpanzees are ignoring this or saying the polling was wrong in 2016. Good. Encourage the derps to believe its all wrong!

Sorry Fed Up but Hillary was just so damn disliked. Just think, how many people found her such a disagreeable person that she got beaten by Donald Trump.

Unfortunately Trump's approval numbers in a state, by themselves, aren't good predictors of how that stat will go in the election, because the election won't be just a referendum on Trump but a choice of two candidates. People may disapprove of Trump but still vote for him if they disapprove of the other candidate even more.

For example, Texas will almost inevitably go blue at some point because of the growing Latino population, the growing population of migrants from more liberal parts of the US, the fact that it already has huge cities which are relatively liberal, and the fact that its suburbs are turning against Trump for reasons that make people more likely to turn Democratic. It's very, very unlikely that Utah will vote blue next year or in the foreseeable future, no matter how low Trump's approval rating is. There are vast numbers of hard-core Christians in much of the country who would vote for Satan himself over a "gun-grabber". It's necessary to know more about each state's demographics and circumstances than just Trump's approval there.

derp, slang for a stupid person

"Anonymous said...
Sorry Fed Up but Hillary was just so damn disliked. Just think, how many people found her such a disagreeable person that she got beaten by Donald Trump."

Infidel753, yes, all of that is true, but the map in my post does show a trend and that trend shows that Trump is not wildly popular even within the states he won. And that's not a good sign going into re-election. A lot will happen between now and the 2020 elections, including debates. I've seen a marked deterioration in Trump's ability to talk in depth about policy, foreign and domestic -- not that that even matters to his cultists, but his recent tweets about the Hong Kong riots show that he has no grasp about what's going on in the world. And his foolish tweets about China and tariffs are amazingly stupid.

Trump's undisciplined behavior as POTUS and his awful incompetent administration will, IMO, factor in people's assessment of whether or not he deserves a second term.

Does all that mean that Hillary is actually the President Shaw?

"Anonymous said...
Does all that mean that Hillary is actually the President Shaw?"

No, of course not. It means that with the help of Russia and Republican voter suppression, Trump won the electoral vote. He's a minority president who's never been able to secure even 50% job approval from the American people.

"I really hate the discourse about “who can take on Trump,” like he’s some big, scary monster. He is a sad, flailing fraud, a serial failure enabled by crooks & plutocrats. Mock him. Pity him. But don’t “take him on” by trading insults, it grants him too much credit.

People take Trump seriously because other people take him seriously, like a dystopic version of the Peter Sellers movie Being There. His opponent should ride the emperor-has-no-clothes theme relentlessly. It’s what most terrifies Trump — that people will regard him as a fake…

Point is, Trump is not some intimidating tough guy. He’s soft as cotton candy, a coward, an emotional & intellectual toddler who’s been protected from his serial failures by a rigged system…

Debating a toddler doesn’t require courage so much as patience & focus. The toddler will scream & throw his own feces around. But every childcare worker or parent knows the worst thing you can do is engage a toddler on his own level. “No YOU’RE the poopy-head!” The way to expose Trump as an overgrown manbaby is to treat him like one.

Trump isn’t merely an overgrown toddler, he’s also terribly unpopular with most Americans. As we’ve seen, he’s bleeding support all over the country, including among lifelong Republicans in Texas."

No matter how unpopular Donald Trump is (approval rating at last check a mere 42 percent), there are many a pundit predicting the Electoral College will come through for him and his re-election hopes come Election Day 2020.

But a new Civiqs poll finds Trump may need to pump his brakes.

According to New York magazine, Civiqs’ state-by-state polling of registered voters shows Trump in trouble in all 50 states.

If that were to represent how the 2020 elections turn out, Trump would have a booming 119 electoral votes. And it’s not as though he’s on a knife’s edge between victory and defeat in all these Trump 2016 states where he’s doing poorly:

He’s underwater by 12 points in Pennsylvania, 11 in Michigan, and nine in Arizona, North Carolina, and Wisconsin. And there’s virtually no indication that states that narrowly went for [Hillary] Clinton in 2016 are trending in Trump’s direction:

His approval ratios are minus 18 in Colorado, minus 15 in Minnesota, minus 12 in Nevada, and minus 27 in New Hampshire.

These are, by the way, polls of registered voters, not just “adults,” so they should be a relatively sound reflection of the views of the electorate.

Ray, those are encouraging reports. But it's still early. However, with what we've seen since 2015, it doesn't look like Trump will all of a sudden become "presidential" and behave like a sane human being. He's crazier by the week what with his Tweets and chaotic behaviors, rants, and boasts. How he's been behaving does not bode well for the 2020 election.

I know that his cultists actually believe the country will re-elect him because he electorally beat Hillary in 2016. But he was a relatively unknown quantity then, popular because of his tv personality and his "non-D.C., gonna clean up the swamp" rhetoric. The country has seen that was all a fraud. He's worse than any long-time pol in DC could ever have been because his ignorance and bullshitting has plunged this country into chaos and now possible recession.

Yeah. Many, many factors are diffierent today from what they were in 2016. The most important of which is that a majority of Americans see Trump for what he is: An fraudulent jackass!