Caution! Exploding Heads On The Right! 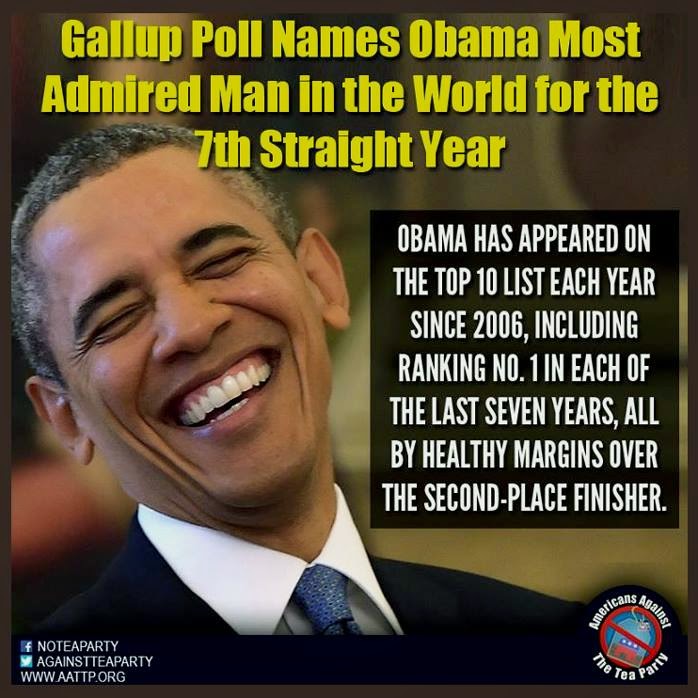 The man has star quality. Wish I would be around to read how history judges his effectiveness and concrete accomplishments as well as his negatives.

I really don't get into hype anymore, just
judge based on how my life and those close to me are affected by presidential leadership or lack thereof.

Naturally, the lovely peoples of the world admire Barack and Michele, Pope Francis, as we adore all children of the light. And I don't begrudge anyone the right to like GWB.

There is something wrong with the basic methodology of this survey, as famous as Gallup is. Most of the choices seem to be Americans, although the greatest percentage of living humans have quite obviously never heard of a dickhead like Ben Carson or Bill O'Reilly. Let's look at this list. Once you get past the first three or four guys, it looks like a list of total losers with notable exceptions in places six and seven.

Obama
Clinton
Billy Graham
GWB
Ben Carson (R U kidding?)
Stephen Hawking
Bill Gates (Nobody really likes that guy at all)
Bill O'Reilly (Did they let English and European poeople vote?)
Putin (The only people that like him are Obama-haters)
Butt Chimney? No fuckin' way.
Prince William?

This poll is obviously slanted towards conservative white people from England and the U.S.A.

I guess I meant conservative, white Americans. If the poll included English people or anyone at all from the UK, obviously it would include David Cameron, who is doing a very credible job indeed, Elton John, Mick Jagger, David Bowie or at least, Paul McCartney.

Many blogs and conservatives were recently trumpeting the truth Gallup was sharing about the veracity of the unemployment numbers coming out if the Obama admin.

I'm wondering if they will now accept these numbers with equal aplomb...

Thanks everyone for the comments. I actually don't care much for these sort of popularity polls. My motive in posting this is simply to piss off the mutton heads who come here every day, copy my posts and comments, change some wording and paste them into a certain blog run by a degenerate, a racist, and an imbecilic derp.

So to the imbeciles who copy everything in my posts, copy this: Mr. Obama is the most admired man in the world, and you're pasting stuff into a slime pit! Wow! What keyboard warriors you are. LOL!

The president's approval numbers are improving. More and more Americans approve of the job he's doing.

These are recent polls, not from a year and a half ago.

ISM, Americans are fickle folks. And polling organizations have simply capitalized on this fact.

The polls on job approval, etc., are a snapshot of what the American people are feeling at a particular moment in time.

The Gallup poll on most admired man, I believe, polls people from around the world every year on this subject.

I wonder who the right would name as most admired?

I thought the inmates of wingnuttia said "Obongo/Obammy" was hated around the world. Maybe their "world" means the blog where all their Stupids gather at to bark at the moon when reality hits them over their heads and trickles out of their ears?

"I wonder who the right would name as most admired?"


We admire Ted Nugent, Sarah Palin, and Victoria Jackson. The best of the best.

Most admired by the far right?
..from what I've seen, Clive Bundy
and Vladimir Putin are very popular. In that vein, Hitler,
Limbaugh, Scott Walker and others whose use of power is detrimental
to most humans seems to be much admired type.

The Most Interesting Manifold In The World said...

BB-Idaho, the far right is now very much into badass King Abdullah of Jordan. He's an Islamist they've grown to love and admire!

I don't believe King Abdullah can be considered an Islamist in the sense most people view the term Islamist.

King Abdullah is a moderate and Jordan is by and large a moderate Muslim state in comparison to the more radical regimes.

I certainly do not fault Jordan one iota for its response to ISIS' s brutal inhumane burning at the stake of their pilot.

RN, of course, you're correct. But the extremists on the blogs have stated with no exceptions that ALL Islamists are blood thirsty demons.

Which makes the point... Except when from time to time they find it useful to sing a different tune. Usually tied directly to another "Bash the President" for his weakness. Or whatever.

The biggest problem with the republicans and conservatives/libertarians IMO is their frequent hypocrisy. That and the blinders they sometimes wilfully wear.

The Stench Trench, , aka Lisa's Smut Hut really percolates noxious fumes. I think it has peaked though.

Les... you're the biggest driver of traffic there... quit responding in kind and most of the sock puppets will disappear...

It's no surprise that Obama is the most admired man globally when you consider (a) the impact any American President can have on the world, and (b) the contrast with his predecessor.

A lot of people around the world find this country's military power rather terrifying, and it matters a lot to them what kind of man controls it.

So now the loonies on the right are loving on another country's leader. Remember when they thought Pootie-Poot was kool? Now they luvs themselves a really nice Islamist (just a little while ago they HATED all ISLAMISTS becuz THEY WANT TO KILL US ALL! Now they're luving another foreign leader.

Righties: Always supporting some other country rather than their own. And yes, Obama is our country's leader and represents America, not Abdullah or Putin.

Nice to see the turn-coats put their "American" loyalties on a Commie and a Islamist.

They hate Obama more than they love their country.

It is crystal clear that the Stench Trench, is commenters, and other similar weblogs are not interested in, nor do they posses the wattage for, serious discussion of ideas and reasonable discourse.

But it was fun baiting them for awhile.

There's no question the extremists on the right and in the Stench Trench are anti-American turn-coats, disloyal to their country. Man, they're the ones who strut around with guns and bibles pretending to be real 'muriKans, meanwhile they're helping America's enemies. When the lefties didn't support Dubya during the disastrous Iraq war, the righties called them traitors. What should we call these people who have put their loyalties with a person they've sworn to hate: an Islamist? Whoever said this is right: They hate Obama more than they love America.

It is weird that the group that calls Muslims "mudslimes" and all kinds of disgusting names now thinks a "mudslime" is an awesome leader? Did they forget that king adullah is a Sunni Muslim, a believer of a religion they have always and forever condemned for its brutality and said is not a religion but a cult?

So they're now in love with a mudslime cultist? Even if he's fighting to kill ISIS, he's still a Sunni Muslim. Obama is a Christian, but the wingnuts have found a hero in a Sunni Muslim?

The Baggers are having a mental breakdown. We knew their Obama derangement syndrome would scramble their brains and it has.

My word. You still go over to Lisa's blog?