Here's something you won't read...


on extreme-right wing Bagger blogs, because it doesn't fit their insane narrative that insists President Obama is a "secret Muslim" and a Christian-hating Commie.  But enough about crazy people and their paranoia.  Here's what President Obama wrote in a LATimes Op-Ed today: 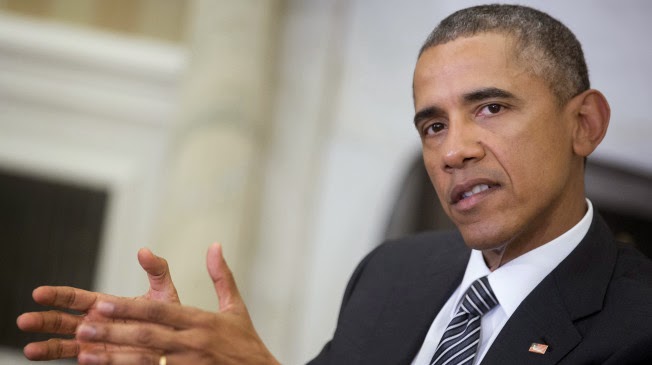 President Barack Obama on Wednesday neutralized a conservative line of attack on his approach to terrorism by condemning a recent mass beheading in Libya as the "murder of Egyptian Christians."

Conservatives and evangelicals cried foul when the White House released a statement Monday on the beheadings of 21 Egyptian Coptic Christians by Libyan militants claiming affiliation with the Islamic State terror group. The statement referred to the victims as "Egyptian citizens" instead of Egyptian Christians.  But in an op-ed published Wednesday in the Los Angeles Times, Obama dispelled that ambiguity.

"In Syria and Iraq, the terrorist group we call ISIL has slaughtered innocent civilians and murdered hostages, including Americans, and has spread its barbarism to Libya with the murder of Egyptian Christians," he wrote.

The President called for international unity in the fight against the Islamic State as world leaders gathered in Washington for a three-day summit on countering violent extremism. He emphasized that strategies other than the use of military force must be employed if the global community hopes to wipe out terrorism.

"Efforts to counter violent extremism will only succeed if citizens can address legitimate grievances through the democratic process and express themselves through strong civil societies," Obama wrote.

"Those efforts must be matched by economic, educational and entrepreneurial development so people have hope for a life of dignity."


And if you don't believe me when I say the extremists in the right wing Bagger blogsphere are insane, just read this from one of the inmates of "American Thinker," a far right-wing site that apparently employs people whose IQs are not quite as high as a bowl of spit.

Yes.  And the people who read American Thinker are the same people who claim liberalism is a mental disorder.

Ignorance and stupidity remain so easy to sell to those republicans and conservatives of low IQ.

An appropriate case for Obama to make such a distinction, since in this case the victims were singled out for being Christians. The majority of ISIS's victims have actually been Muslims, and it's the Yezidis who have gotten the worst treatment.

As for the American "Thinker" story, Obama must sometimes feel very tempted to display a different upraised finger to these ignoramuses.

Sowell was a Marxist? And the cons think he's brilliant? Remember what they did to Van Jones for his youthful flirtation with Marxism? Could this be another instance of gross and shameless conservative hypocrisy? Hmmmmmm?

Rusty, when a conservative flirts with Marxism, that's understandable in their cramped little hypocritical world. When Van Jones flirted with it, he lost his job.

They really, really are confused and above all, stupid.

Snippet quip on Thomas Sowell is interesting, quite like a verbal sound bite. True but without any supporting detail. Most folks won't bother to Google and learn the full scoop on his transition or his reasoning behind it. Certainly the sound quip snippet types that seem to populate the fringe element of the right won't bother.

RN, the snippet is up there because it points up, once again, hypocrisy on the right.

As R.O.F. pointed out, the right went berserk when people found out Van Jones flirted with Marxism as a young man. As a result, he lost his job. Anytime Jones is mentioned, his brief period of romancing Marxism is brought up.

The right NEVER mentions that Sowell did exactly the same thing and that the right somehow finds a way of ignoring or not counting it against him.

I wondered if anyone would notice and make the connection. Rusty Old Ford did.

Another interesting fact about Sowell I discovered: He is a faithful fan of Rush Limbaugh and has stated he listens to him, AND he also thinks Hannity is worth listening to as well.

For a man with his educational background his choices in political pundits are puzzling, unless we understand that he is a political hack himself.

I read conservative writers, and I've never heard any of them praise those two demagogues, not David Brooks, David Frum, Kathleen Parker, or Peggy Noonan, just to name a few.

IMO, Powell is an idiot savant.

My view is a smart person, wise if you prefer, will listen to, read, or both views from multiple sources both conservative and liberal. Using reason they will then discount those views that are found lacking.

The fact is far too many people limit their intellectual growth by self limiting their exposure to what they find comfortable
Their comfort zone if you will.

Bottom line, the types you target in this post will not see themselves (the majority anyway) and so preaching to the choir is alive anf well. It is a trait shared by right and left.

My view is a smart person, wise if you prefer, will listen to, read, or both views from multiple sources both conservative and liberal

I do that, and apparently so does Shaw. It's doing so that reveals how full of utter raving lunatics conservatism is, and how dishonest and hypocritical it is to claim that the right and the left are in any way comparable in that regard.

"IMO, Powell is an idiot savant."


That should have been SOWELL, not Powell. I hadn't had enough coffee when I typed that.