As the Idiot-in-Chief tries to take credit today, remember this:


"The death of Abu Bakr al-Baghdadi, the Islamic State leader, in an American commando raid in Syria on Saturday happened largely in spite of President Trump’s actions, not because of them, according to military, intelligence and counterterrorism officials.""Mr. Trump’s abrupt decision to pull out American forces from northern Syria disrupted the meticulous planning and forced Pentagon officials to press ahead with a risky, night raid before their ability to control troops and spies and reconnaissance aircraft disappeared, the military and other officials said."


Also, remember how FAUX NOOZ and others refused to give President Obama credit for the death of Osama bin Laden. 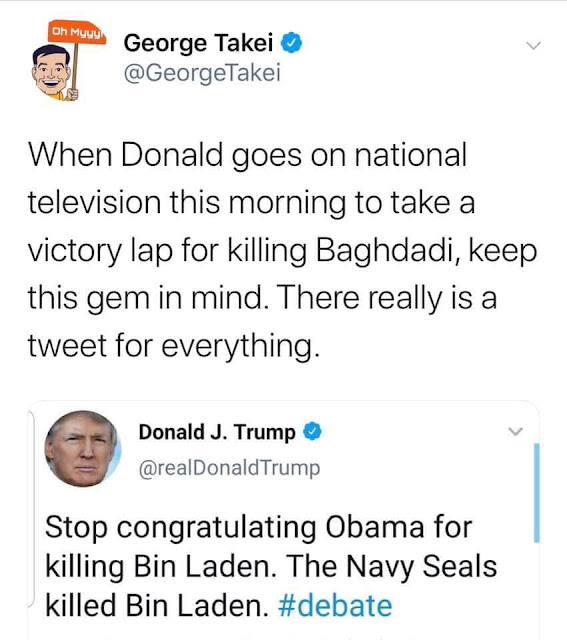 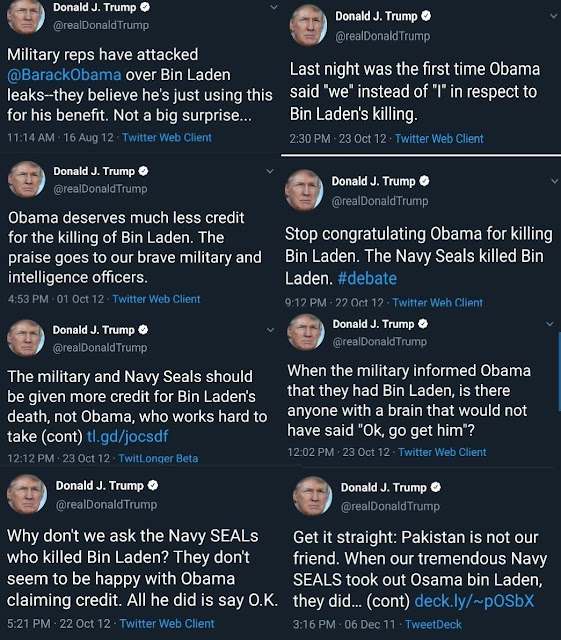 He really is a total and profound moron. Did you catch the video of him being loudly booed and taunted with chants of "Lock Him Up" at the Nationals game last night? His face, when he realizes what the crowd is chanting is priceless. Also, the owners of the team asked NOT to be seated anywhere near the orange moron.
I'm loving his misery, personally. God knows he's inflicted enough misery on the rest of us.

.yes...and with a good, snapping wheel kick, just above his left ear.......Also, along those same lines, one must wonder, (or not) what was going through the mind of #45 as he was introduced to the fans at the World Series..the boos..the chants of "Lock him up"...______(Note to #d45: This is what it's like when you're facing real people in a real audience, NOT the hand-picked and carefully selected lackeys and bootlickers in those carefully orchestrated Sieg Heil rallies your house Goebbels clones put on.) _____I'd bet, though, that #45 is so..dense...he probably didn't get that HE was the one that was being boooed...
Now...what would have been a real Nail 'Em In The Nuts moment? ___If President Obama had been there, and introduced after #d45....Can you imagine!!!!

All conservative pundits, attend ye your fainting couches, instanter!!. Clutching pearls are available in the adajacent vending machines.....lol.
_
I think #d45 would have left the game, pissed off all to heck and back...Probably would have popped a vein...That would have been SUCH a MOMENT.....Man!!!!!!!!

BlueBull, Anon, and Anon, Yes, I saw Trump's humiliation and thought about how reality must have hit him in the face when thousands and thousands of Americans booed him for a long, long time.

Morning Joe whined that America "doesn't do that," meaning yelling "Lock Her/Him Up!" But in fact because of the malignant narcissist a minority of Americans put in office, sadly, we actually DO THAT! All thanks to the uncouth, boorish, lying, cheating conman in the White House.

Everything Trump touches turns to excrement!