BREAKING NEWS: "Prosecutors say Lev Parnas and Igor Fruman were part of a conspiracy to funnel a Russian donor’s money into U.S. elections

WASHINGTON—Two Soviet-born donors to a pro- Trump fundraising committee who helped Rudy Giuliani’s efforts to investigate Democrat Joe Biden were arrested late Wednesday on criminal charges of violating campaign finance rules. Lev Parnas and Igor Fruman, two Florida businessmen, have been under investigation by the U.S. attorney’s office in Manhattan, and are expected to appear in federal court in Virginia later on Thursday, the people said.

Both men were born in former Soviet republics. Mr. Giuliani, President Trump’s private lawyer, identified the two men in May as his clients. Both men have donated to Republican campaigns including Mr. Trump’s, and in May 2018 gave $325,000 to the primary pro-Trump super PAC, America First Action, through an LLC called Global Energy Producers, according to Federal Election Commission records.

The men were charged with four counts, including conspiracy, falsification of records and lying to the FEC about their political donations, according to the indictment that outlines a conspiracy to funnel a Russian donor’s money into U.S. elections.

The group concealed their work by laundering foreign money into U.S. elections by disguising the true origin of the money, the indictment says. Beginning in about March of 2018, Mr. Parnas and Mr. Frurman began attending fundraising events and making substantial contributions “with the purpose of enhancing their influence in political circles and gaining access to politicians,” prosecutors wrote.

The indictment Thursday alleges that Mr. Fruman intentionally misspelled his name as to further evade FEC scrutiny. Fundraising records show that an “Igor Furman” who otherwise matches Mr. Fruman made additional campaign donations totaling almost $400,000, beginning in March 2018. That would bring the pair’s contributions to about $1 million.

John Dowd, who headed Mr. Trump’s legal team until spring 2018 and is a lawyer for the two men, didn’t respond to a request for comment." --WSJ

Here's a photo of Trump with one of the crooks: 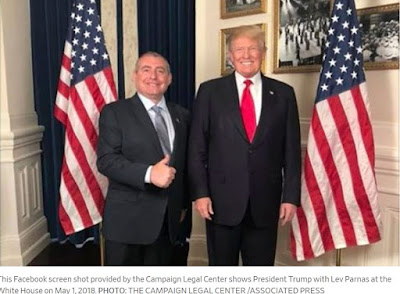 Multiple news outlets have reported that the former House chairman, now running for Congress in another district, was involved in the effort to oust the U.S. ambassador to the Ukraine.
Posted by Shaw Kenawe at 11:34 AM

All of this, everything, is made up.

Russians working to impact our 2016 elections did not happen. It's a hoax.

President trump never said there are good people on both sides when he was speaking about Charleston.

The call to the leader of Ukraine was perfect.

He never wanted to short circuit any examination of the fake Russia stuff.

His admin never wanted to separate kids from their parents or put them in cages, but they were forced to by the Obama admin.

All of the statements he ever made "supposedly" asking other countries to get involved in our election, were jokes. If he even ever said those things.

The critical statements from people who have left his admin, are false. They are the delusional rantings of losers.

The idea that anyone in his admin would violate any law, even a campaign finance law, like all other accusations, is false.

There is not, nor has there ever been any "Quid pro quo!"

No Kurds will be harmed because we brought American soldiers home when we did not abandon our allies.

The US needs Donald Trump to battle the Deep State, the Globalists and the Anti American Libtards who only want to destroy and bring down America.

Or so folks who love and blindly support President Trump will have you believe.

The guys, who of course are not guilty and not involved in anything nefarious, had ONE WAY TICKETS out if the US.

Let's just stop and think about that for a sec...

For our conservative friends... teleport yourselves 6 years back in time. If associates of HRC had been caught doing the same, would surmise that they were innocent and that there was nothing shady going on?

I'd be stunned if Trump or his appointees actually demonstrated honesty, principles, and integrity.

Rev, for the democrats to push for impeachment just shows how much they despise trump and will spend all of their resources doing it. He beat the democrat darling and they will make him pay because how dare he beat someone who was anointed eight years before.
The dems have yet to accept that trump will not win the next election and if they just back off and make the appearance of working for the American people instead of spending all their time trying to impeach trump they would be a shoe in.

The chance of trump being removed from office is slight and he only has one year left so the dems would be better positioning themselves as competent leaders instead of spiteful idiots. Unlike the last two presidents who faced impeachment trump will not resign, oh that's right only one of them did what was best for the country.

Skud: "Rev, for the democrats to push for impeachment just shows how much they despise trump and will spend all of their resources doing it.

SK: WRong, skud. What we despise, and what you and the rest of the 30 percenters tolerate is Trump's corruption, bullying, lying, aiding and abetting our enemies and betraying our allies.That you and other Trumpers are okay with that is astounding.


skud: "He beat the democrat darling and they will make him pay because how dare he beat someone who was anointed eight years before."

More Americans voted for Hillary to be president than voted for Trump. Trump is where he is because of the Russian interference. Your mantra is getting old. Only 30% of the American people support him and over 50% are in favor of the impeachment inquiry to uncover his corrupt administration. Why don't you talk about that?

skud: "..and if they just back off and make the appearance of working for the American people instead of spending all their time trying to impeach trump they would be a shoe in."

SK: I don't know what planet you live on, but the American people know that the House Democrats have passed OVER 100 PIECES OF LEGISLATION AND MOSCOW MITCH THE REPUBLICAN HEAD OF THE SENATE HAS HELD EVERY ONE OF THOS PIECES OF WORK UP. It's really tiresome to read Goopers repeat false talking points while ignoring facts.

If you think Nixon resigned because he thought it was best for the country, you are more naive than I thought. Read some history books and learn that Nixon's OWN REPUBLICAN PARTY went to him and told him he would be impeached and be found guilty by the Senate because of the overwhelming evidence of his corruption, he did NOT resign for the "good of the country." Nixon resigned because he didn't want to be found guilty by the Senate. This is American history, not Gooper talking points stuff that they make up.

This is why Trump still has 30% of the American voters: They don't care about facts or truth or honesty. They're cultists, and Trump is their cult leader.