The Republican's president actually wrote and sent this letter to Turkish President Erdogan (which he ignored): 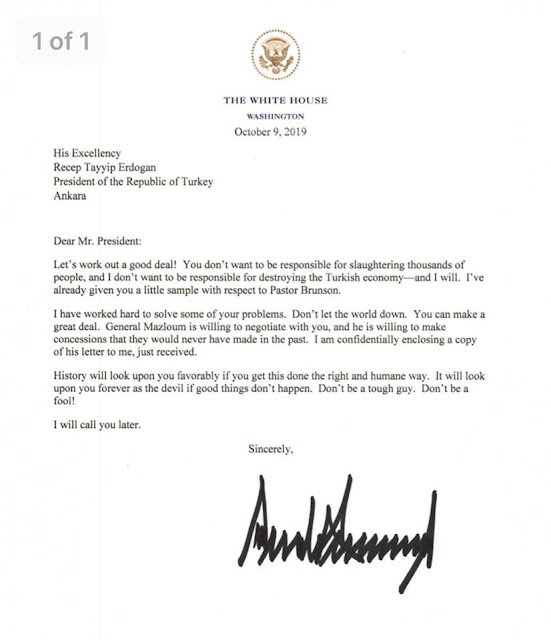 So if you didn't catch the presser with Trump and Italian President Sergio Mattarella, this is what you missed:
Trump claimed the US has been allies with Italy since ancient Rome.
He called President Mattarella, "President Mozzarella" several times.
He bashed NATO while praising Putin.
He said AG Barr met with Italian Intelligence to investigate crimes he is certain lead to President Obama.
He was noticeably slurring his words. Again.
Is it any wonder the Italian translator was looking at Trump like this??
#ICaintEvenMakeThisShitUp 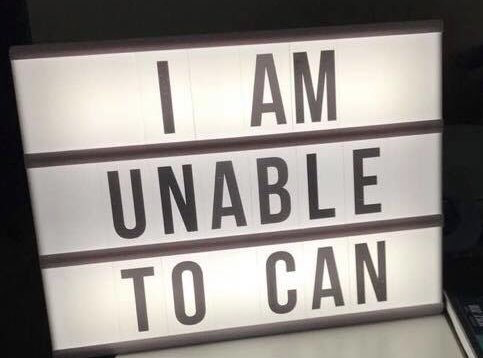 I weep for our country.

I remember not so long ago driving home from work listening to the news on the radio. They were reporting on another crazy episode involving Berlusconi(spelling?) in Italy. I remember shaking my head wondering how Italy could have elected someone like him. Never in my wildest dreams would I have thought the USA got Italy beat in the crazy dictator head of the country department . How the mighty have fallen. Shame on us.

It is what one expects from Trump.

This....whatever it was....was brought to you by Your Republican Party!
Oh man...he aint gonna make it to the election 2020...The Ghost of Reagan is beating him about the head and shoulders....
What I think everybody misses is that...Even faking a Presidency is tough work. The stress, the constant pressure....day after day after day....
Even for someone like Trump..it might put him into ill health, or even kill him....

Possumlady, I thought the same thing! Berlusconi had his supporters in Italy just like Trump has his supporters here. I've never been able to understand the mentality of people who continue to support a known liar, cheat, and con man who shames America on a daily basis. But there they are, every day, making excuses for Trump. I'll never forgive them.

RN, even I, who see idiocy from Trump on a daily basis, would have never believed he could send a letter like that. He's embarrassed himself and America AGAIN!

Anonymous, I don't think Trump is engaged in the day-t0-day stresses of the presidency. Apparently, he spends most of his days tweeting, watching teevee, and acting like a fool.

But with the pressure of impeachment bearing down on him, Trump may be headed for a crack-up of some sort. So, you may be correct.

He is such an embarrassment to the office of the president and to the American people. Furthermore, he thinks it is a great letter and publicizes it. His presser is straight out of SNL. They should sue him for stealing their material.

Jerry, Trump wrote that letter and showed it to the world hoping it would make him look tough. That letter made him look weak and stupid. It's hard to believe people still support that jackass!

You Know Who said...

Shaw, excuse my language, but if anyone wants to understand how fucked up the Trumpers are read this pathetic post from the Mother Ship of Fools. This is why Trump continues to keep their support. They truly believe this crap:

The truth is that most Dems in Congress wanted us to get out of the Middle East until Trump came along and actually tried to make it happen.

(ME: Their effed up idea of "trying to make it happen" is to write a laughable letter to the Turkish dictator and green light the Truks to invade Syria. This made Russia, Iran, Turkey, and ISIS deleriously happy. But the Trump Bots don't mention that little problem.)

So how long is the US going to police the world. The dems were all for getting out until Trump did it. When is congress going to address the inequalities of trade with other countries, DACA, affordable healthcare for ALL, securing our borders, infrastructure improvements, meaningful tax reform, opioid and drug abuse, homeless and all of the other issues facing this country.
Not one in the democratic debates supports job growth just income distribution from the rich to the poor. A few candidates support breaking up Google and Facebook and have government control over them. They are companies who employ thousands at very good incomes and at no cost to the user. The government has proven for decades they cannot manage anything, post office, VA, Medicaid and now they want to control social media and our healthcare.

Starting in Jan when the Dems take control of the White House and the Senate.

Never been one for unified government. IE: when all three branches are the same party.

Until now. Now the top priority is undoing the trumpian/GOP disaster.