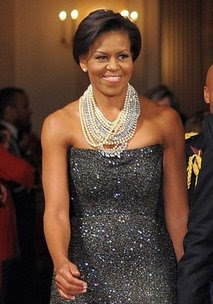 I find this sort of Top 10 or Top 100 listing silly and nonproductive, and the only reason I'm posting this is to counter the sad and lonely haters who couldn't stop themselves from coming here and insulting Mrs. Obama in the comment section in the post below. I felt it necessary to show them that their offensive opinions of the First Lady, while giving them some strange sort of sick comfort, are definitely those of a fading and ever-shrinking unimportant minority.

For what it's worth, Mrs. Obama has made history again--even though it's not exactly earth-shattering. I'm more impressed with her strength as a woman, her devotion to her family, and her academic achievements.


WASHINGTON (AFP) – For the first time the US First Lady has made Maxim magazine's annual top 100 list of "hottest women in the world," with Michelle Obama making the grade at number 93.
Billed as the "stimulus package America really needs," the British-based international magazine known for revealing pictorials of models and actresses showcases Obama in her tasteful official White House portrait.

In the rare accolade for a political spouse, the magazine notes that her husband President Barack Obama "may be dealing with two wars, an economic meltdown, and a rapidly graying dome.
"But at least our Commander in Chief gets to come home to the hottest First Lady in the history of these United States."
Obama has been hailed as a style icon by fashionistas around the world since her husband was elected president.
Maxim's self-described "eyeball-searing, fantasy-fulfilling, brain-exploding" list has Obama topping "Top Chef" host and model Padma Lakshmi (#95) and Oscar-winning "Wrestler" star Marisa Tomei (#97).
The magazine, which has a monthly US circulation of some 2.5 million and is distributed throughout the world, moved over last year's chart-topper "Transformers" star Megan Fox to give the number one spot to TV's "House" actress Olivia Wilde.
Posted by Shaw Kenawe at 1:46 PM

Wow, ain't got no blog: You're a tool. All kidding aside, you're still a tool.

No, James. He's struggling with who he really is.

Come on out of the closet into the pure light of accepting who you are.

I support your accepting yourself.

And so will the people in your life who really love you.

Just between us virile males IAGNB, dating guys, drunk or not, is not something guys admit.

Did I TELL you that I thought Michelle Obama was HOT?

I said it first!

She rates in my top 5...she's a real woman (nothing plastic and she hasn't starved herself to death) and she would be great too talk to!

All kidding aside, I think you are right, I totally agree that Michelle Obama is hot. In fact she reminds me of a guy I dated when I was drunk.

She sets a new example for the "The Ugly American"---

IAGNB is one of the (unintentionally) funniest trolls I've seen. As with Cheney, Republicans wince when he speaks in their name. May he keep offering more of such "wisdom."

It's so nice having a fashionable First Lady representing the country when she and the president visit foreign nations.

When George and Pickles Bush were loitering in the White House and traveled abroad, they looked like something from central casting sent to look like characters from Hee Haw.

Smart, good looking, and did I mention smart?

Shaw - you are SERIOUSLY infested with trolls...

Beth: I'm opposed to abortion also, but you know you go around this the wrong way all the time. If you are so concerned about Notre Dame and seem to know about the place, how come you can't even spell the name of the university? But more than anything, my eyes just glaze over at those who equate Obama with Hitler (just as they did over those who equated Bush with Hitler).

Beth asked: "How else is someone supposed to "go about it"?"

Ever hear of "winning hearts and minds?". You might want to look into it. After that, look into Godwin's Law. The knee-jerk "just like Hitler" is rather tired and does not convince anyone.

When I first mentioned you spelling Notre Dame as Notre Dame, I thought after the fact that I was making a sort of spelling-flame about your typo. That would not be fair of me. Now I see that you are making up new spellings and defending them as correct.

I researched: Notra Dame is not a valid spelling of Notre Dame. Do you have a list of the valid spellings? Of course you don't. There is only one.

Matt: I hope your objections to disruptive protests extend to picket lines (strikers harassing workers and customers), the WTO protesters, and those who show up to harass major-party conventiongoers every 4 years.

But Beth has a good point about Dr. King's disruptive protests. Once controversial, I doubt you will find many who will complain about these now.

dmarks said..."But Beth has a good point about Dr. King's disruptive protests. Once controversial, I doubt you will find many who will complain about these now."


Sorry, but I do not find any difference in what he believed and in what Alan Keyes believes! Alan Keyes deserves credit for speaking out about what he believes.
Are only LIBERAL causes are allowed for protesters.

Anonymous: With Dr. King widely praised by conservatives, I don't call it a "liberal cause" anymore.

As for Alan Keyes' protest, I don't know much about it, really. Or how he conducted it. But if he (as many protesters do) trespassed, blocked public right of ways, and/or harassed people, I'd call him out of line.

"We are not even sure if he is a legally elected President?"

He was. Anyone who thinks Obama is not legally elected President is just repeating the sore-loser tactic that came from the other side when George W. Bush won the election in 2000.

I did not vote for him, but I am well enough versed in American civics to know that just because the "other guy" is elected, does not make him any less of a legal and legitimate President. Representative democracy works even when the votes don't go our way.

'May you choke on the filth you have brought on yourselves'

Have a great weekend!

Beth, if you want to talk about abortion, please get your own blog and do so.

And stop coming here, posting a comment and then deleting it.

You're annoying us all.

Look what he's posted on my blog.

I've included the IP address if you want to ban him. I just did.

Talk about being a PUSSY!

My IP tracker comes up with this:

I just sent Verizon an email, too. Silly trolls.

Thanks, Christopher. The more the American people reject their brand of Republicanism, the shriller they become--and nuttier.

Beth wrote the following comments on my blog, and then she deleted them. She probably isn't aware that I can keep her original posts:

dmarks doesn't it bother you that Shaw finds it so important to blog about such trivial things like Michelle Obama's polls and what she wears when her husband the president allows the killing of fetuses!!!
What in the hell is wrong with you people on this blog? ... wWhy make such a big deal out of such superficial/ trivial subjects?
Shaw never blogs about ANYTHING of real importance. Obama Supports Killing Babies, and all Shaw can blog about is that Michell made the list of the top 100 hottest babes!
Do I find it humorous? No I find it ridicules!Beth, this is my blog, not yours. You want to blog about abortion? Get your own blog, stop coming here and acting like a scold.

You come off as a very unbalanced, needful person. Get help.

Is this blog is dedicated to the Coronation of Michelle Obama? Michelle Obama and her husband President Smirky, continues to show everybody that HE WON! He will do what he likes. I'm sure Michelle is proud of his Country now. She is sitting on the throne.
Everyone there should stand up and turn there backs to him when he speaks.Now that would send a message.

Messiah Obama and his Queen Michell continue to kill innocent babies while they eat Lobsters and caviar and drink champagne.Sick. Just plain sick.

Christopher: Do you get anywhere reporting this kind of thing to Verizon? Just curious.

Beth is a goofball. But compared to some of the real assholes out there, she's a pussycat. Christopher: if you want to see what I dealt with at my old site I'll give an address and a request that you not tell him where I'm at.
And there were a dozen more like him.