Clinton campaign lawyer Michael Sussmann was acquitted of lying to the FBI, in the 1st trial of special counsel John Durham’s investigation.
The verdict is a major defeat for Durham, who has spent 3+ years and $3.8 million looking for misconduct related to the Trump-Russia probes.
Posted by Shaw Kenawe at 3:28 PM 13 comments:

U.S. marks Memorial Day weekend with at least 12 mass shootings
Since the Uvalde, Tex., elementary school tragedy, there have been at least 15 other shootings that had at least four victims

PORTSMOUTH, N.H. – Quarius Naqua Dunham, a third grader from Portsmouth, N.H. was killed over the weekend when police say he and his family were victims of a random shooting in South Carolina.

According to the Florence County Sheriff's office, 40-year-old Charles Montgomery Allen allegedly shot at three cars as they drove by his home on Saturday.

Dunham was rushed to the hospital after being shot in the neck. The 8-year-old was removed from life support on Sunday and later died. His father was hit in the leg, but is expected to survive. 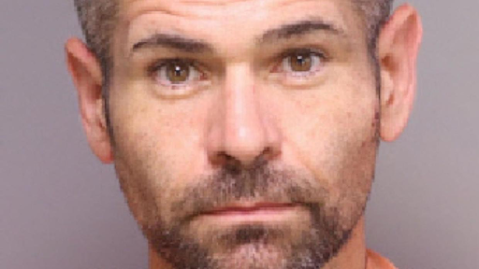 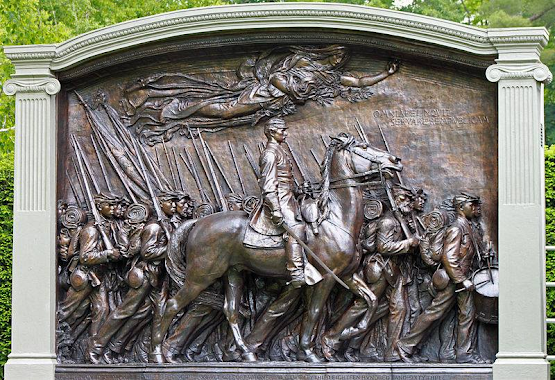 For the Union Dead

SOMETIMES, PEOPLE GET WHAT THEY DESERVE.

I don't know where this is, but the young boy has a t-shirt on with "Texas" on it, so maybe it's somewhere in that benighted state.

Think of all the money these morons spent on this arsenal when they could have put it toward something that builds instead of kills.

We are a sick, sick country. 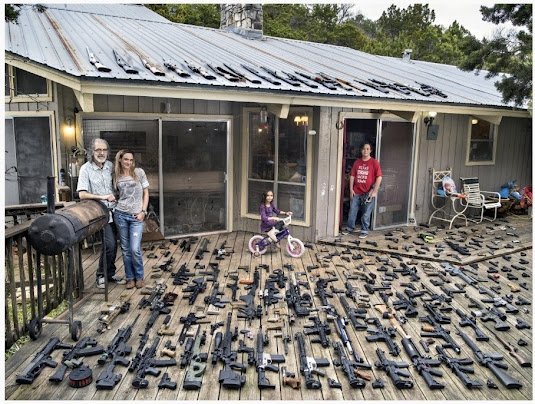 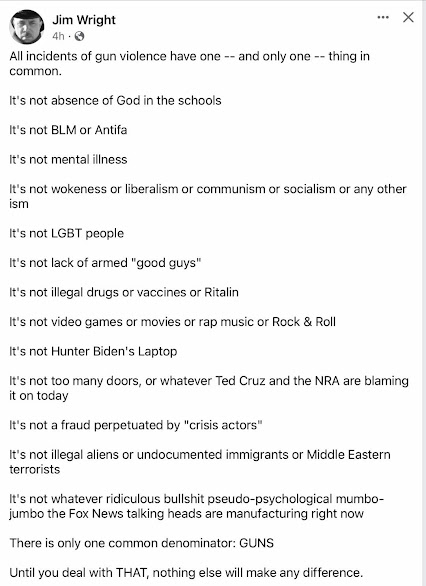 NO DANCING THIS SATURDAY NIGHT -- TOO DAMN UPSET

Greg Abbott lowered the age from 21 to 18 to buy a assault rifle. 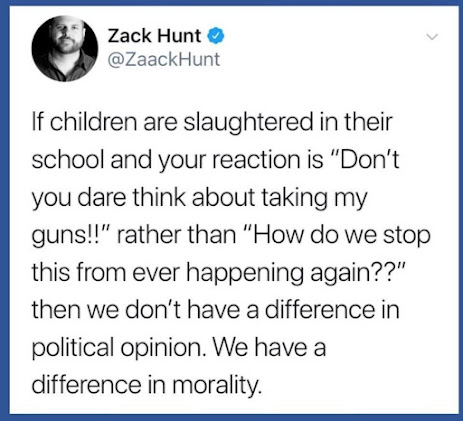 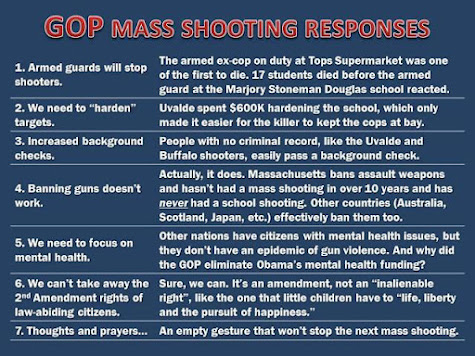 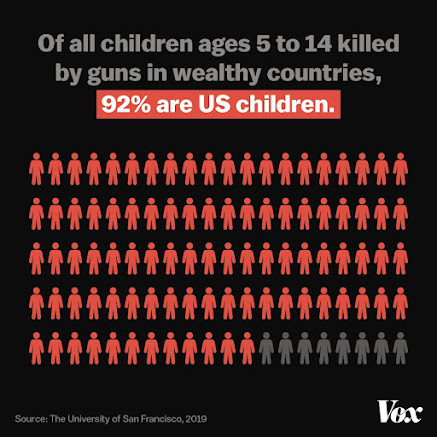 Guns have become the leading cause of death for American kids
Posted by Shaw Kenawe at 5:00 PM 3 comments:

IN OTHER HORRIFIC NEWS...

Trump Said to Have Reacted Approvingly to Jan. 6 Chants About Hanging Pence

The House committee investigating the Capitol assault has heard accounts of the former president’s remarks as he watched the riot unfold on television. 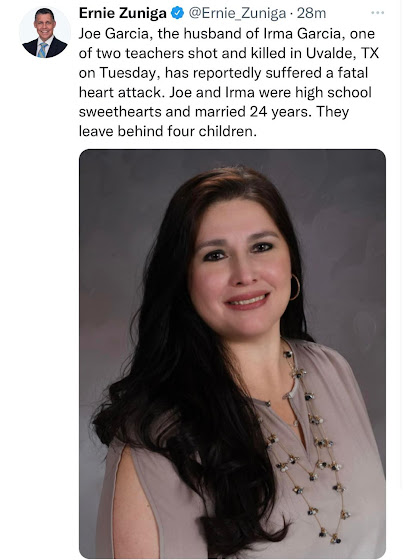 Today we heard the devastating news of Irma Garcia’s husband dying of a heart attack. A horrific reminder that the murders continue long after the bullets stop.
Jeremy Richman-died by suicide 7 years after his daughter Amelie was murdered at Sandy Hook.
Austin Eubanks, survived Columbine. Spiraled into addiction within 1 year of surviving that Massacre. He got clean, became a motivational speaker. He died of a heroin overdose in 2019.
Sydney Arielle- survived Parkland. Died by suicide in 2019
Calvin Desir- also survived Parkland. Died by suicide in 2019.
Posted by Shaw Kenawe at 9:27 PM 15 comments:

IS THE RIGHT TO OWN AR-15s MORE IMPORTANT THAN THE LIVES OF THESE CHILDREN?

These are just a few photos of the children who were slaughtered yesterday. 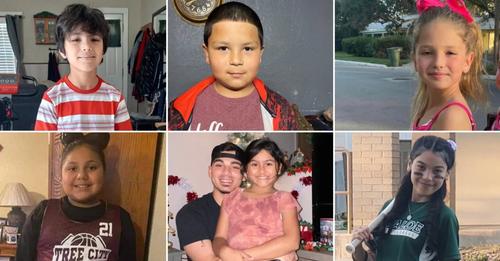 This country is sick.

I blame the politicians who refuse to do anything about this sickness.

President Clinton banned the sale of AR-15s. That ban lapsed when George Bush became president, and he refused to renew it (as he had promised while campaigning for the presidency). 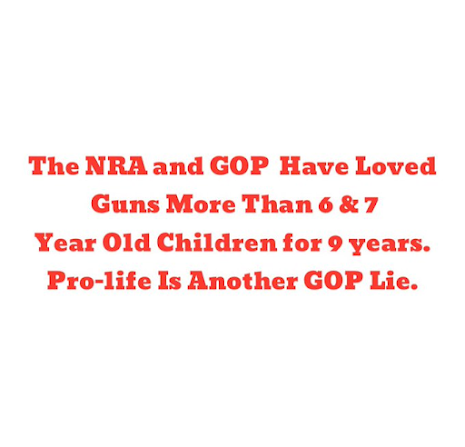 A PICTURE IS WORTH A THOUSAND WORDS

This is your current Trumpublican party and its gun-worshipping/fetishizing politicians: 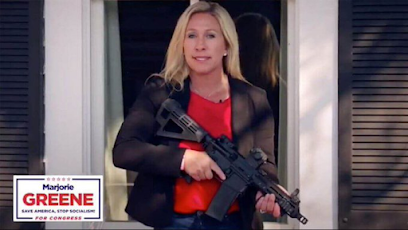 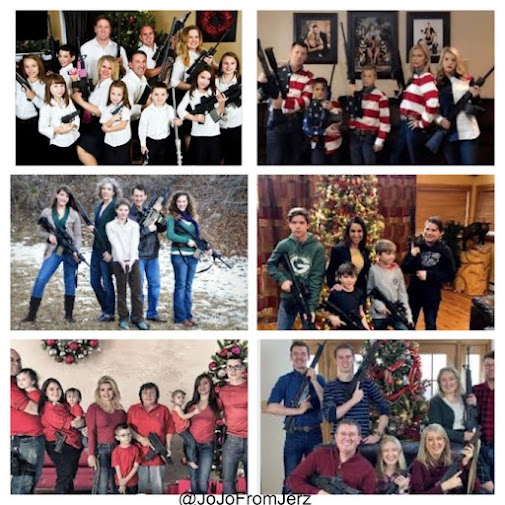 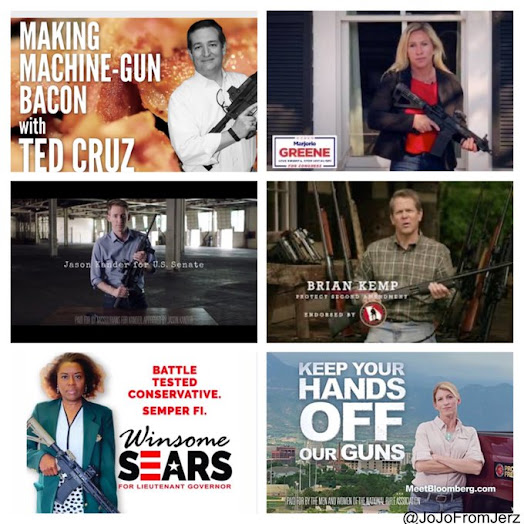 The gutless @GOQ ghouls cheered this.
"Trump Signs Bill Revoking Obama-Era Gun Checks for People With Mental Illnesses"
#RepublicansAreTheProblem #GunReformNow
Texas Republican leaders promised action on gun safety after the El Paso shooting. Instead, they passed permitless carry.
The Texas Legislature passed a bill allowing Texans to carry handguns without a license or training — an expansion of gun rights so divisive Republican leaders in previous years refused to touch it. 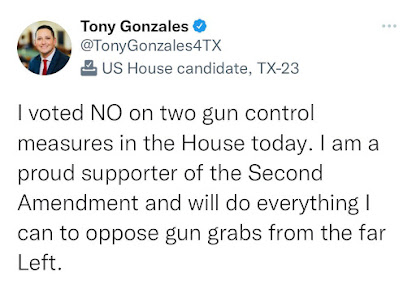 John Fugelsang
@JohnFugelsang
·
8h
Mitt Romney has taken more than $13mil from The NRA, far more than any other Senator. He's right that prayer/condolence are grossly inadequate. But the fact that he won't do more proves his soul is, too. It's not enough to be better than Trump, Mitt.

Joni Ernst
@SenJoniErnst
· 11h
A senseless, horrendous act of evil. My heart is with all those in Texas right now.

Peter Frampton
@peterframpton
26 years ago, a gunman entered Dunblane Primary School in Scotland, killing 16 kids and a teacher. The UK govt responded by enacting tight gun control legislation. In the 9400+ days since, there have been a total of O school shootings in the UK. #Uvalde

Peter W. Singer
@peterwsinger
·
8h
Twenty minutes in response to a peaceful protest of less than 100 people. And it will do nothing for those dead kids
Quote Tweet

Kieran Healy
@kjhealy
· 9h
Ten days ago it took the Senate about twenty minutes to unanimously pass a bill extending security protection to the family members of Supreme Court justices when it looked like a house might be picketed.