For a party that is an unconditional supporter of Israel and Nuttyyahoo, this is odd:


REPUBLICAN SENATE CANDIDATE, WHO HAS CALLED FOR COUNTRY 'FREE FROM JEWS,’ COULD BE DIANNE FEINSTEIN’S CHALLENGER

Overt anti-Semites have been slowly creeping into Republican politics in the aftermath of President Trump’s successful, populist candidacy, and now one of them has a fighting chance of representing the Republican Party in a Senate race.

The man in question is Patrick Little, an extremist with hardline anti-Semitic views who is backed by David Duke and other far-right extremists. Little will be squaring off in a top-two primary with 10 other Republicans as well as Democrats and independents on June 5 for the chance to oppose veteran Democratic Senator Dianne Feinstein. According to a recent poll, released last week, he very much has a chance of winning the right to face off with the incumbent.

And this on the Correspondents' dinner on Saturday night, which the Coward-in-Chief did not attend for the second year in a row, and which I did not watch because lately I have been distracted by all things British.

I send my heartfelt thoughts and prayers to everyone in the Trump Administrstion who was hurt by last night's jokes.

Comedian ends comedy dinner by saying that Flint still doesn’t have clean water, an attempt to point out Washington’s continued neglect of people who need help.

Washington responds with a rigorous debate about the tone and civility of the comedian’s jokes.


#45 bragged about grabbing women's genitalia, mocked a disabled NYTimes reporter, insulted a Gold Star family, demeaned a POW, cheated on all 3 wives, and constantly lies to the American people BUT he was elected POTUS? Michelle Wolf was inappropriate at the WHCD? Since when did we hold comediennes to higher standards than the POTUS?


This is what the GOP has done to America.
Posted by Shaw Kenawe at 9:40 AM 9 comments:

President Spanky's nominee for the head of veterans affairs, Ronny Jackson, is in trouble?

We know that #45 reaches into the swamp and pulls out the swampiest incompetents and unqualified creatures that percolate in the muck.  He's had the highest turnover in administration personnel than any other president in modern history, starting with his choice for NSA, Mike Flynn, who lasted all of  18 days.

Trump's reckless choices to head his cabinet posts are what people who paid attention during his campaign came to expect, and what Republican Steve Schmidt said about the ongoing disaster that is the Trump administration:

Ronny Jackson is just another one of Trump's endless blunders in his endlessly ineffectual governing.

"There's draining the swamp, there's disrupting the status quo, and then there's simply being lazy and perverse. The last characterizes Trump's approach to government.  He has somehow convinced himself that unconventional C.V.s are bold choices, when often they are just reckless gambles.  He has told himself that the shallow , evaporating pool of people keen to work for him are fearless visionaries, when sometimes they're just feckless vagabonds."

I've been happily distracted over the past few weeks and have somewhat neglected blogging.

I'll be back soon.

I blame Great Britain. (That is meant to be cryptic, inscrutable, and enigmatic, except to those in the know.)

More Good News for Democrats and the 2018 Elections

“The Republicans in Congress have failed to hold the president accountable and have abandoned their historic beliefs and values,” Klarman said in a statement to The Boston Globe.

“For the good of the country, the Democrats must take back one or both houses of Congress.” Klarman told the paper that he wanted to use the money he was saving from the Republican tax overhaul to “invest” in Democrats.
Posted by Shaw Kenawe at 6:49 AM 6 comments: 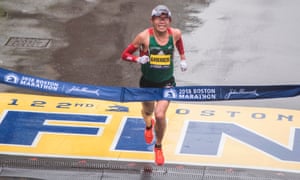 BOSTON -- Desiree Linden, aptly named, broke a 33-year drought in a deluge. She won Monday's Boston Marathon on desire -- years and years of it layered over talent and discipline and resilience. It was a race that required putting mind over monsoon and finding a second wind stronger than the icy gusts that rattled runners' jackets like spinnakers ballooning on the open ocean.

It was a day for an athlete who knew how to bail water from the boat and keep rowing, which is what Linden did when she thought she was about to sink. Rain-slicked asphalt turned the finishing stretch of Boylston Street into a mirror in which Linden could have seen all her unfulfilled ambitions staring back at her, had she chosen to look down. She kept her gaze forward, the hollows around her expressive eyes deepening with every step. She was outkicked in the last hundred meters of the 2011 race, a result that has both propelled and shadowed her career since.

Posted by Shaw Kenawe at 7:23 AM No comments:

It's a cold rainy Marathon Monday.

Good luck to all the runners.

We'll see you at the finish line. 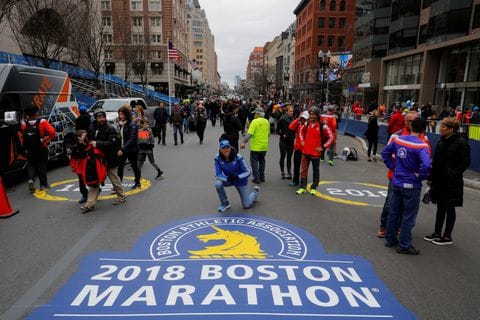 OFF TO THE GREAT STATE OF MAINE FOR THE WEEKEND.


Be excellent to each other: 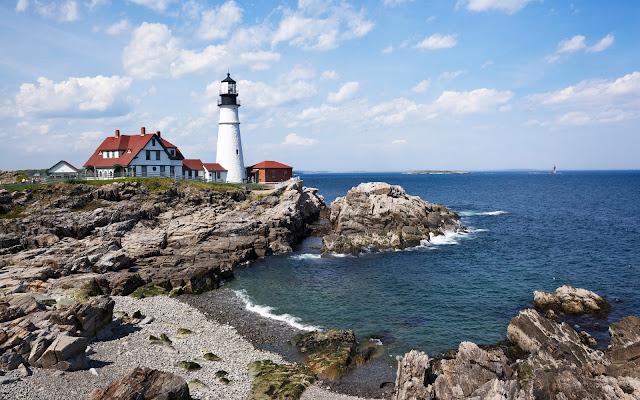 He went on a Tweet storm this morning and showed America and the world once again what a low-class WATB he is.

Comey's book will sell in the millions, and America and the world will learn more about the slime bucket currently soiling the White House.

#45 Tells the Russians and Syria Exactly What the U.S. Will Do!

President Spanky made fun of President Obama countless times for giving away to the enemy plans for what the U.S. was going to do in the Middle East.

Here is the feckless CiC telling Russia, Syria, and the world what the U.S. is going to do in the Middle East:

Russia vows to shoot down any and all missiles fired at Syria. Get ready Russia, because they will be coming, nice and new and “smart!” You shouldn’t be partners with a Gas Killing Animal who kills his people and enjoys it!

So now we have a CiC who uses Twitter to announce a military strike.

Why do we keep broadcasting when we are going to attack Syria. Why can't we just be quiet and, if we attack at all, catch them by surprise?

The President must get Congressional approval before attacking Syria-big mistake if he does not!

"Was this tweet a purposeful kick-off of a missile launch? Did the top brass in the military know about it?Had they OK'd the language and timing of the tweet? Or was this just Trump popping off? Watching early morning cable TV, seeing a report about Russia's pledge to shoot down missiles aimed at Syria and thinking "I'll show them"?

A tweet he sent less than an hour after his "get ready Russia" tweet seems to suggest the latter. "Our relationship with Russia is worse now than it has ever been, and that includes the Cold War," wrote Trump.

"There is no reason for this. Russia needs us to help with their economy, something that would be very easy to do, and we need all nations to work together. Stop the arms race?

But, didn't he just tweet about Russia and Syria needing to get ready for some missiles headed their way?


"Trump says missiles ‘will be coming’ to Syria, taunts Russia for vowing to block them." says the headline. Yeah, right - we certainly don't remember Trump mocking Obama for stating his objectives against ISIS and 'warning the enemy.'

This pathetic, failing, hysterical and afraid fool just takes things from minute to minute, impulse to impulse, reaction to reaction, lie to lie without a consistent thought or plan or even with enough knowledge to create one. What will he do when he realizes there's no way out for him? Everything he says and does screams GUILTY!"
Posted by Shaw Kenawe at 11:43 AM 11 comments:

President Spanky blubbered and whined again about the investigation that he calls a "witch hunt" authorized by a Republican assistant attorney general who appointed a special counsel, also a Republican, and which is legal and ongoing.

#45 claimed that the FBI "raided" Trump's personal lawyer's office, seizing business records, emails, and documents, including information on Cohen's payment to Trump's porn-star mistress, Stormy Daniels. And then he went on to threaten firing Robert Mueller and Rod Rosenstein.

As usual, Trump doesn't know what the hell he's talking about, and he shows his appalling ignorance of the law and innate stupidity on how our government works.

Here's what others have to say about the torrent of gibberish and imbecility let loose by the supperating disgrace currently defiling the White House:

Richard H. Bernstein says it perfectly: "Mr. President, you are a lying sack of used food, a barrel of human toxic waste, a mendacious idiot. Nobody broke into anything -- the raids in question were pursuant to lawful warrants, and the entire procedure had to be vetted and approved at many different levels in the Justice Department and the court system. That you are throwing a tantrum about this matter shows only how guilty and inept you are."


"Geoffrey Berman, currently serving as Interim United States Attorney for the Southern District of New York had to sign off on the warrants. He's a Trump appointee. How's that a witch hunt exactly? Mueller found evidence outside of his purview. He turned it over to the appropriate authorities. MANY hoops had to be jumped through to get these warrants approved. This isn't an attack on our country. It's an attack on the corrupt bastards that are abusing their power trying to undermine our country for their own gain. Trump is quite simply outsmarted and outgunned legally. There are no facts backing up his bullshit finger pointing." 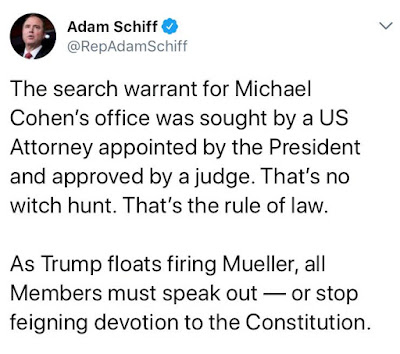 "Special Counsel Mueller, a Republican, has uncovered a deep and detailed pattern of Russian inteference in our elections that has led to indictments and guilty pleas. It has also led to the Trump administration itself leveling sanctions against Russian individuals for meddling in our elections, proof that it's not a so-called "witch hunt."

And let's not forget the law suit against America's Con Artist-in-Chief:  His fake Trump University:

A federal judge in the Southern District of California on Monday finalized a $25 million settlement to be paid to attendees of the now-defunct real estate seminar called Trump University. Judge Gonzalo Curiel's decision came after an appeals court rejected arguments from a Florida woman who attended Trump University and said she wanted to pursue a separate lawsuit. New York Attorney General Eric T. Schneiderman called the settlement a victory for Trump U. "victims."
Posted by Shaw Kenawe at 6:48 AM 25 comments:

It's good to be the king's daughter!

Each round of tariffs was worth an estimated $50 billion. Trump eventually responded in turn–by announcing widespread tariffs against various Chinese industries. One Chinese industry that is notably not subject to those new U.S. tariffs, however, is the clothing manufacturing industry.

According to a... report in the Washington Post: Many of the products branded by Ivanka Trump’s fashion and clothing line are manufactured in China. And China recently approved three new trademarks for Ivanka Trump’s brand there–on the same day she dined with Chinese President Xi Jinping in her official capacity as White House advisor.


The nepotism and using the office of the POTUS by Ivanka to receive special favors for her businesses in China stinks like a cesspool.

#45 didn't drain the Swamp, he added more creatures to it.

On a humorous note, this poll was shown on FAUX NOOZ before Howard Kurtz yelled "Take it down!" 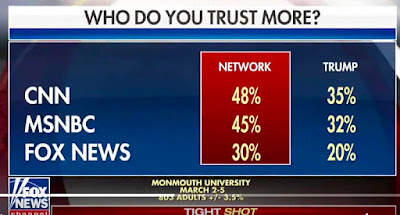