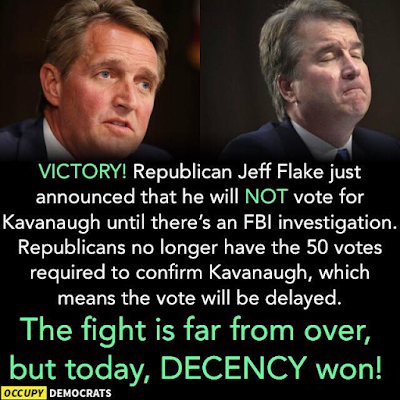 The American Bar Association called Thursday evening for postponing a vote on Judge Brett M. Kavanaugh’s nomination to the Supreme Court until sexual assault and misconduct allegations made by Christine Blasey Ford and others are investigated by the F.B.I.

The dean of Yale Law School, Judge Kavanaugh’s alma mater, echoed the A.B.A.’s call. “Proceeding with the confirmation process without further investigation is not in the best interest of the Court or our profession,” Dean Heather K. Gerken said in a statement on Friday.

And the magazine of the Jesuit religious order in the United States, America, withdrew its endorsement of Judge Kavanaugh, who was educated by Jesuits at Georgetown Preparatory School in Maryland. In a statement on Thursday, the editors said the nomination was “no longer in the best interests of the country.”

\ “If Senate Republicans proceed with his nomination, they will be prioritizing policy aims over a woman’s report of an assault,” the magazine said. “Were he to be confirmed without this allegation being firmly disproved, it would hang over his future decisions on the Supreme Court for decades and further divide the country.”

"If you put a man in the White House who openly boasts of being a sexual predator, a president credibly accused by more than a dozen people of misconduct, you are no friend of women and the good men who love them.

If your rallies are highlighted by “lock her up” chants against a person who has never been charged with a crime, you cannot wrap yourself in due process or presumption of innocence.

If your men of God, led by the Rev. Franklin Graham, say attempted rape is not a crime because “if it was true, these are two teenagers, and she said no and he respected that,” you need a new faith in which to cover your hypocrisies.

Story follows character, as the Greeks knew, and what we’re seeing now with the Bonfire of Republican Vanities is the predictable outcome of those who enabled the amoral presidency of Donald Trump"

The Goopers sold whatever was left of their honor when they made the choice to support one of the worst human beings to ever disgrace the American presidency.

Let the GOP reap the whirlwind. They deserve it all.

Posted by Shaw Kenawe at 2:25 PM No comments:

Not what you want in a Supreme.

The truth will out.


In one poignant exchange, Senator Richard Blumenthal, Democrat of Connecticut, reached for a quote from a colleague across the dais, Senator Lindsey Graham, Republican of South Carolina. Rather than reach, as other Democrats had done, for Mr. Graham’s statements dismissing the accusations against Judge Kavanaugh, Mr. Blumenthal began reading from a passage from the senator’s 2015 book, “My Story.”

Mr. Blumenthal added, “If we agree on nothing else today, I hope on a bipartisan basis we can agree on how much courage it has taken for you to come forward.”
Posted by Shaw Kenawe at 2:09 PM 8 comments:


Trump Calls Kavanaugh Accusations ‘All False,’ but Says He Can Be Convinced by Testimony

If the accusationas are "all false," as Trump claims, how can he possibly be "convinced by testimony?"

Trump, again, is addled-brained and confused.

He has no credibility in this whatsoever.

Blackout Brett needs to withdraw while he still has a milligram of decency left in him. 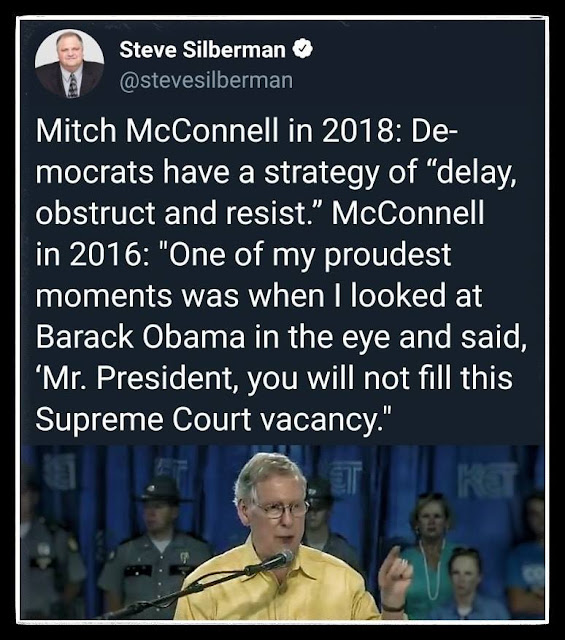 NEVER FORGET WHAT THIS CREEP DID TO PRESIDENT OBAMA'S SUPREME COURT CHOICE. 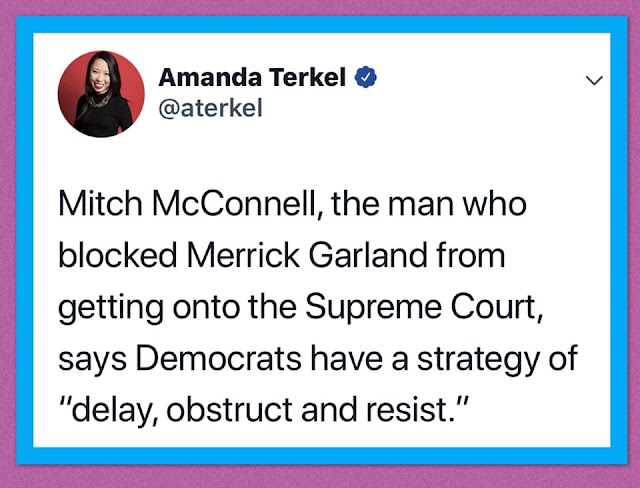 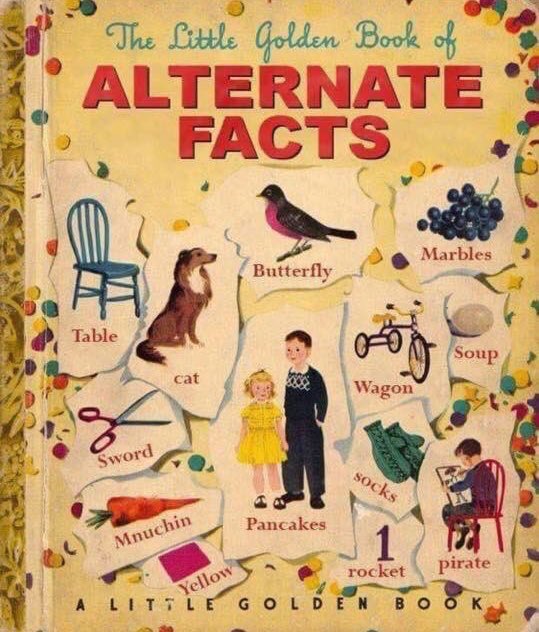 Trump greeted with laughter while touting his administration's accomplishments at UN

"In less than two years, my administration has accomplished almost more than any other administration in the history of our country," Trump said at the top of his speech, which prompted audible laughter in the hall.

"Didn't expect that reaction but that's OK," he responded.


Of course he didn't expect to have people laugh in his lying face. Narcissists are convinced of their magnificence, and so Trump can't imagine other human beings not as in love with him as he is with himself.

The whole world laughed at the horse's ass.

Deirdre Shesgreen and John Fritze, USA TODAY
TRUMP HAS COMPLAINED THAT “THE WORLD IS LAUGHING AT US.” ON TUESDAY, IT DID.

No one recalls ever seeing the United Nation General Assembly laughing out loud at the President of the United States.

Yes, the president* kicked things off in his speech by celebrating the wonder of his own wonderful greatness. And the assembled diplomats laughed and laughed, and that's fairly unprecedented in my lifetime, anyway. But it was the stuff he said that they didn't laugh at, because it wasn't funny at all, that was the meat on which the rest of the world can feast its fear. The President* of the United States, notable in his business career for going bankrupt three times, failing to make money as a casino owner, and stiffing glaziers, carpenters, landscapers, and other lesser orders of people, got up and essentially called the rest of the world a bunch of deadbeats.
Posted by Shaw Kenawe at 11:51 AM 18 comments:

This FAKE meme is going around far right blogs, and it's a total, complete, damnable LIE!

[T]he notion that the photograph was truly a picture of Karen Monahan that documented her condition after an assault by Ellison was questionable, because neither she nor her son claimed that Ellison had beaten or struck her about the face and head.
Moreover, not only does the pictured woman not look like Karen Monahan, but Monahan herself stated on Twitter that “This picture is NOT me” and asked users to stop sharing it:

This picture is NOT me. Please do not share with any connection to me or my story. Please honor this ladies wounds, pain and trauma. Thank you. https://twitter.com/Rugerbymyside/status/1043517509830234114 …

SNOPES: "We don’t yet know the real identity of the injured women seen here. This picture appears to have been online for several years, posted from countries such as Russia and South Africa, and offering no descriptive information other than generic terms such as “pregnant woman beaten by her boyfriend”: 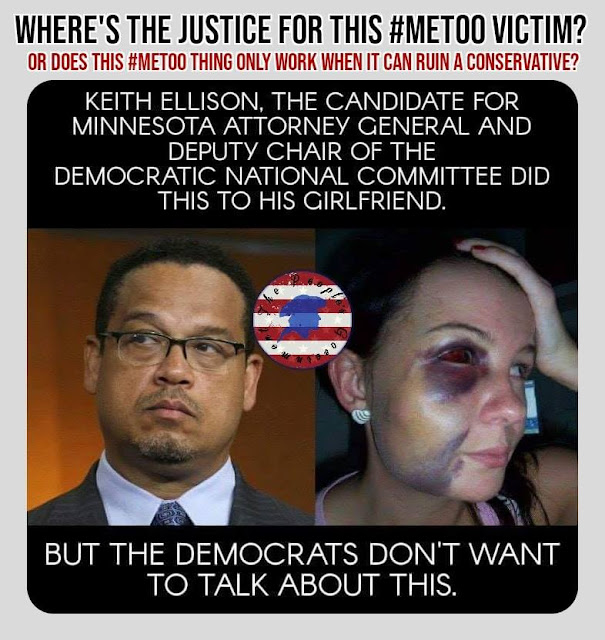 The "Democrats don't want to talk about this" because it is a FALSE, FAKE MEME. And this is how the far right morons perpetuate their lies.


This is Keith Ellison and Karen Monahan, NOT the meme above: 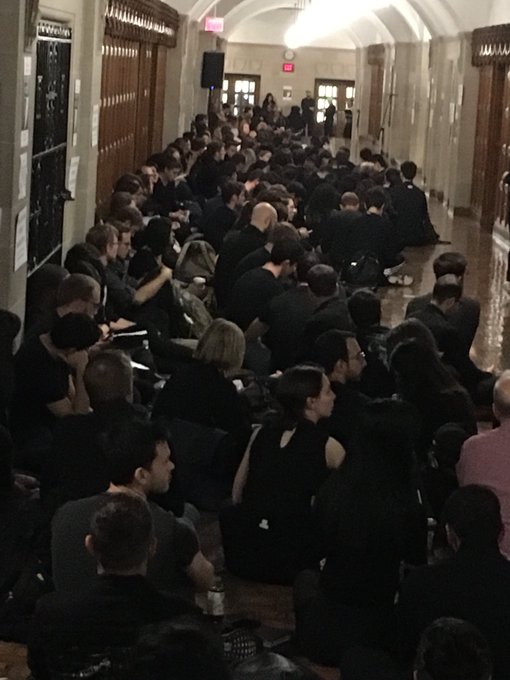 Caroline O.‏ @RVAwonk
Just in case this wasn't clear the first time: When Republicans learned of Deborah Ramirez's allegations against Brett Kavanaugh, they tried to speed up the process of confirming him. The GOP is a sexual predator protection racket.
6:06 PM - 23 Sep 2018
856 replies17,458 retweets48,771 likes
Posted by Shaw Kenawe at 2:28 PM 5 comments:

The current GOP is utterly without honor or credibility. They knew about the Ford accusation, and now we find out they knew about the second accusation and have tried to rush through the Kavanaugh nomination to get an alleged sexual predator on the SCOTUS. We already have one, thanks to the corrupt GOP and cowardly Dems, why do we need another?

I can't tell you how sad I am that Brett Kavanaugh's prep sessions have been hard on him. Maybe he should turn up the music louder.