Replying to @IngrahamAngle @davidhogg111
Things Jesus is said to have done during Holy Week:
Healed people.
Washed people's feet.
Forgave his betrayer.
Let himself be unjustly arrested, beaten, and killed. 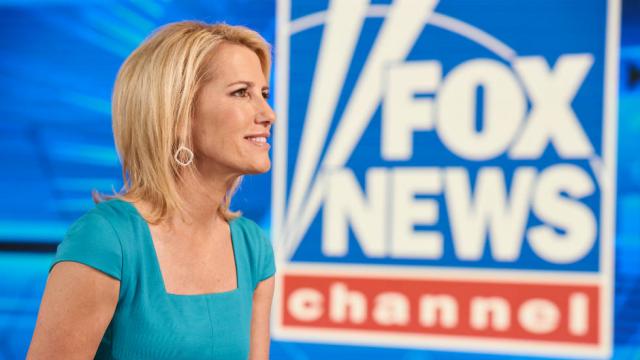 Ingraham to take break from show as advertisers flee over attack on Parkland student http://hill.cm/XfYrpTA

Chalk one up for decency


The far right Goopers feed on nastiness and indecency. It's what gives their lives meaning -- just look at who they support as a POTUS, President Spanky.

But not all Americans can stomach their loathsome behaviors, especially by one of their heros, Laura Ingraham, a particularly repulsive woman who bared her fangs this week by attacking and mocking David Hogg, a survivor of the Parkland massacre.

The blowback from her sponsors was immediate and serious, causing Her Fangness to do a mea culpa so she could continue to draw a paycheck and not lose her crappy show.

"Nutrish, the pet food line owned by celebrity chef Rachael Ray, tweeted Thursday that it will no longer advertise during Laura Ingraham’s show after the Fox News host bashed a teen survivor of the Parkland school shooting.

'We are in the process of removing our ads from Laura Ingraham’s program, as the comments she has made are not consistent with how we feel people should be treated,' a spokesman for Nutrish told HuffPost in a statement.

Hours later, TripAdvisor and Wayfair followed suit. In a statement to HuffPost, TripAdvisor said Ingraham’s comments crossed “the line of decency”: We believe strongly in the values of our company, especially the one that says, 'We are better together.' We also believe Americans can disagree while still being agreeable, and that the free exchange of ideas within a community, in a peaceful manner, is the cornerstone of our democracy".

We do not, however, condone the inappropriate comments made by this broadcaster. In our view, these statements focused on a high school student, cross the line of decency. As such, we have made a decision to stop advertising on that program. A spokeswoman for Wayfair told HuffPost that Ingraham’s comments were “not consistent with our values.”


"In the spirit of Holy Week," Ingraham decided to apologize. But be assured that next week after giving lip service to "Love Thy Neighbor As Thyself," Her Fangness will be back ripping the throat out of anyone who isn't a slobberingTrumpista.

Any student should be proud of a 4.2 GPA —incl. @DavidHogg111. On reflection, in the spirit of Holy Week, I apologize for any upset or hurt my tweet caused him or any of the brave victims of Parkland. For the record, I believe my show was the first to feature David...(1/2)

... immediately after that horrific shooting and even noted how "poised" he was given the tragedy. As always, he’s welcome to return to the show anytime for a productive discussion.


The question is why are the far right Goopers so out-of-their-minds rabidly angry with these kids? The WaPo gives us some answers:


So what exactly is this cruel form of oppression that has been imposed on conservatives by the Parkland students and their media enablers?

Here’s the real difficulty the Parkland students present. It’s not that they’re passionate and surprisingly articulate for their age, though they are. It’s not that they’ve widened the conversation on guns by refusing to accept things the adults have taken as given for years, such as the idea that the NRA is simply too powerful to bother opposing, though they have.

It’s that they’re too sympathetic. And when a spokesperson is sympathetic, when you attack them personally, you look like a jerk.

Despite what conservatives say, no one is going to criticize them when they disagree with the Parkland students on any substantive matter. If Rich Lowry argues that the students are wrong and goes on to explain why the minimum age to buy a rifle should remain at 18, no one will respond, “How dare you disagree with those lovely teenagers?”

No, what conservatives are really mad about is that the tactic of demonizing those they disagree with — which is so common in contemporary political rhetoric (on both the right and left) — has, in this case, been taken away from them."
Posted by Shaw Kenawe at 2:49 PM 3 comments:

Another Inductee into Trump's "Hall of the Best People"


"ONLY THE BEST PEOPLE" -- Thursday Edition 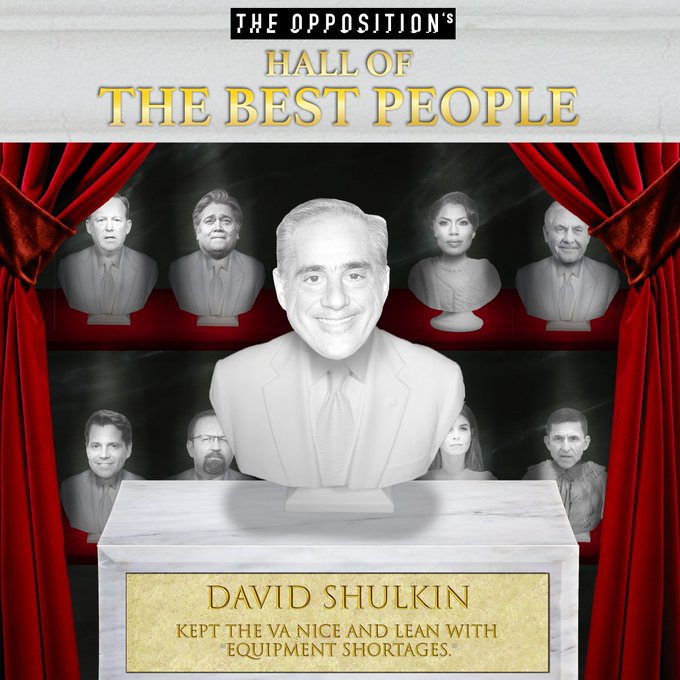 Congratulations to former Secretary of Veterans Affairs David Shulkin for the end of his service and his induction into Trump's #HalloftheBestPeople!

We'll never forget the way he put family first by getting taxpayers to cover his wife’s airfare for an 11-day European trip.

"This administration is running like a fine-tuned machine." - Donald Trump

...another one bites the dust.

Veterans Affairs Secretary David Shulkin is out, fired by twitter.

Funny how Trump only hires the BEST people, then fires them to hire other people, who by definition cannot be the best. Maybe he doesnt know what that word means.
Posted by Shaw Kenawe at 6:08 AM 11 comments:

Here's Some Positive News For Wednesday


#ParklandStudents have a 56% favorability rating

64% support for an assault weapons ban


Suburban voters angry with Trump threaten GOP’s grip on House In Illinois’ 6th Congressional District, 62,990 people voted Democratic last week for seven candidates, up from just 8,615 in the 2014 primary. In a district that voted for Mitt Romney in 2012 and Hillary Clinton in 2016, a warning is being sent in letters as big and bold as any that have hung on a Trump building.

If Republicans want to hold onto the House, they will have to compete in communities that had little to do with the working-class regions that sent Trump to the White House in 2016: affluent, white-collar suburbs of Democratic cities. Many of the most competitive House seats this year are in the tony bedroom communities of Los Angeles, Chicago, Denver, Houston, Philadelphia, New York and Washington.
Posted by Shaw Kenawe at 11:32 AM 2 comments:

"The Number of Americans With No Religious Affiliation Is Rising"


Could the shameful Evangelical support of Donald Trump be the cause of the thousands of people falling away from religion?

Remember during the political fight to allow marriage equality when the Evangelicals' motto was "Marriage is between one man and one woman. Period?"

That could be one reason that thinking people turn away from religion. Hypocrisy.  Hypocrisy in all religious sects -- the Catholic hierachy that knew about the sexual abuse of children and kept quiet; Islam, the religion that forces women into second-class citizenship, even punishing women with death for being raped; and the Evangelicals who continue to support a serial adulterer, liar, and business cheat.

The Number of Americans with No Religious Affiliation Is Rising

The rise of the atheists By Michael Shermer |


"The Number of Americans with No Religious Affiliation Is Rising The rise of the atheists By Michael Shermer | Scientific American April 2018 Issue The Number of Americans with No Religious Affiliation Is Rising Credit: Izhar Cohen In recent years much has been written about the rise of the “nones”—people who check the box for “none” on surveys of religious affiliation. A 2013 Harris Poll of 2,250 American adults, for example, found that 23 percent of all Americans have forsaken religion altogether. A 2015 Pew Research Center poll reported that 34 to 36 percent of millennials (those born after 1980) are nones and corroborated the 23 percent figure, adding that this was a dramatic increase from 2007, when only 16 percent of Americans said they were affiliated with no religion. In raw numbers, this translates to an increase from 36.6 million to 55.8 million nones. Though lagging far behind the 71 percent of Americans who identified as Christian in the Pew poll, they are still a significant voting block, far larger than Jews (4.7 million), Muslims (2.2 million) and Buddhists (1.7 million) combined (8.6 million) and comparable to politically powerful Christian sects such as Evangelical (25.4 percent) and Catholic (20.8 percent).

This shift away from the dominance of any one religion is good for a secular society whose government is structured to discourage catch basins of power from building up and spilling over into people's private lives. But it is important to note that these nones are not necessarily atheists. Many have moved from mainstream religions into New Age spiritual movements, as evidenced in a 2017 Pew poll that found an increase from 19 percent in 2012 to 27 percent in 2017 of those who reported being “spiritual but not religious.” Among this cohort, only 37 percent described their religious identity as atheist, agnostic or 'nothing in particular. ' ”


If the number of non-affiliated Americans is rising, the Evangelicals can look to themselves for betraying their moral values and thus turning millions of Americans off of a kind of religion that picks and chooses who is morally fit to lead a country, depending only on his or her political affiliation.
Posted by Shaw Kenawe at 8:31 AM 20 comments:

When someone asks why we've become a second-rate country under Trump, point to these people:

Yeah, the "Jesus Loves You" crowd blasphemed a young woman who survived a massacre and who is exercising her Constitutional right to demonstrate for change.

But the righties, who have a lot in common with certain gangs in 1930s Germany, will have none of it. If an American kid who was traumatized by a rampaging killer wants to join and lead a movement for laws that support universal background checks, banning the sale of AR-15s and bump stocks, the extremists on the right will do all in their power to discredit, debase, and dishonor those who've lived through the blood bath and those who died in it.

Those are Trumpistas. Plain and simple minded.

And they are on the losing side of history.

A doctored animation of González tearing the U.S. Constitution in half circulated on social media during the rally, after it was lifted from a Teen Vogue story about teenage activists. In the real image, González is ripping apart a gun-range target.

The doctored image mushrooming across social media appeared to confirm the belief among Second Amendment absolutists that calls for stricter gun-control measures are sacrosanct, destroying the very foundation of the United States. The animation bounced around conservative Twitter before it received a signal boost Saturday from actor Adam Baldwin.

I marched in the demonstration on Boston Common along with 50,000 other Americans, and I can attest that the crowds were peaceful, polite, and absolutely determined for change. Boston's police commissioner, Bill Evans, reported there was no violence and no arrests.

There were, however, a few, very few, exceptions to the overall polite  and friendly crowd. And those who opposed the demonstration for change came with their own signs and their own agendas.

Here's one of them. This is, after all, the Trump era, and he most definitely represents what Trump has inspired in his people:


Among so many other things, here is a message from March For Our Lives: