My fb friend Michael K. wrote the piece below, and it needs to be seen by a lot more people:

"Marjorie Taylor Green, the newly elected congresswoman, has supported QAnon, and the disgusting view that the Sandy Hook, Parkland and Las Vegas mass shootings were false flag operations. She has called for Pelosi's assassination.
The more you look at her, the more despicable she appears. She remains seated in Congress, remains likely to be seated on a committee, and remains undenounced by the vast majority of her colleagues. She is one of the more egregious examples of the extent to which the Republican Party has been captured by paranoia, madness and lust for violence. There are many others.
These are the people with whom we are supposed to seek 'unity '. We have a very big problem in this country, and the more it's examined, the bigger it gets:
Survivors of the 2018 mass shooting in Parkland, Florida, are asking congressional Republicans to publicly censure Marjorie Taylor Greene for suggesting the school shooting was a “false flag” and for harassing a teenage survivor on Capitol Hill in 2019.
Greene, the newly elected Georgia congresswoman who is known for her support of the pro-Trump QAnon conspiracy theory, was filmed in March 2019 as she followed 18-year-old David Hogg, one of the students who survived the shooting at Marjorie Stoneman Douglas high school, outside Capitol Hill.
In the clip from 25 March, Greene can be heard calling Hogg a 'coward,' demanding that he explain how the students were able to set up meetings with so many lawmakers, and telling him that she herself was a gun owner. Greene tells Hogg that gun control will not work, and that his classmates would not have been killed if one of the law enforcement officers assigned to guard the school had 'done his job.' 'She later addresses her viewers, echoing false yet frequently spread conspiracy claims that mass shooting survivors and family members of victims are 'crisis actors' and the attacks that killed their loved ones were staged as a plot to pass gun control laws..."
This is from Media Matters:
In November 2018, California was hit with the worst wildfire in the state’s history. At the time, future Rep. Marjorie Taylor Greene (R-GA) wrote a bizarre Facebook post that echoed QAnon conspiracy theorists and falsely claimed that the real and hidden culprit behind the disaster was a laser from space triggered by some nefarious group of people.
Greene’s post, which hasn’t previously been reported, is just the latest example to be unearthed of her embracing conspiracy theories about tragedies during her time as a right-wing commentator.
In addition to being a QAnon supporter, Greene has pushed conspiracy theories about 9/11, the Parkland and Sandy Hook school shootings, the Las Vegas shooting, and the murder of Democratic staffer Seth Rich, among others.
Greene also has a history of pushing anti-Muslim and anti-Semitic remarks.
CNN’s Em Steck and Andrew Kaczynski recently reported that on her Facebook page, “Greene repeatedly indicated support for executing prominent Democratic politicians in 2018 and 2019 before being elected to Congress.”
“Greene repeatedly indicated support for executing prominent Democratic politicians in 2018 and 2019 before being elected to Congress.”
************************
This is the new Republican Party: Electing and supporting people who call for murdering elected members of Congress. A political party that tolerates this sort of thing is not a political party anymore, but a Fifth Column advocating the overthrow the United States government.
Taylor and any other Republican in Congress who promote the murder of elected officials should be kicked out, shunned, and shamed. That's what a party of decent and patriotic people would do.
The current Republican Party is neither. And neither are the people who support. 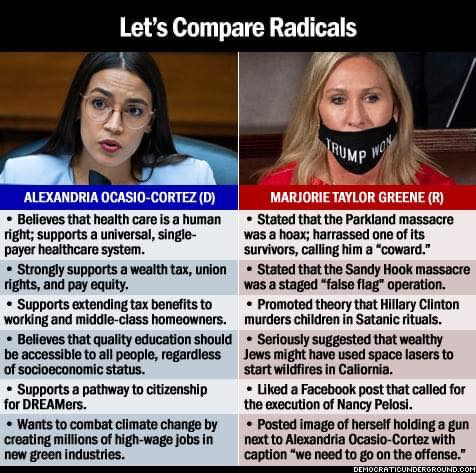 This is the Tweet Donald Trump sent out just before his insurrectionist/terrorist thugs attacked the Capitol building, went looking to hang/murder Mike Pence, and mercilessly beat and killed a Capitol policeman: 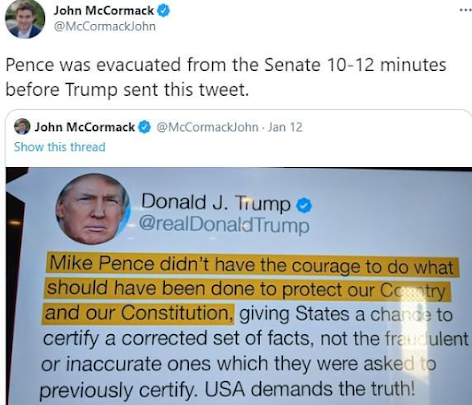 And this is one disgusting example of how Trump cultists and anti-American, anti-democracy GOPers reacted:
ACUCHUCK says:
January 11, 2021 at 6:01 am

I’m pretty sure that TINY BIT OF ROWDINESS, at the capital, is nothing, compared to the bloody noses, that will come of this, if the Left continues it’s way’s.

I for one am so angry, that I have to force myself to turn off TV and try and think of something pleasant. But of course that don’t work.

I find my self dreaming how I can mow down those Antifa bums with my Hummer. Problem is no matter how I look at it I still get caught and prosecuted, because, I’m a Trump Supporter.

I find shaking my head in disbelief, because, of what has happened to this country, AND ALL BECAUSE 1 MAN STOOD UP TO THE ELITES.

A majority in the GOP still supports Trump and is against holding him accountable for the insurrection against the United States of America. The only conclusion one can come to is that the current GOP is a rogue party that supported the overthrow of America's government by trying to undo a fair and legal election by the proto-fascist thug, Donald J. Trump, who sought to stay in power by illegal means.
I can hardly believe I typed that. But it is correct.
Thomas Kaine
@thomaskaine5
Seems very clear. Trump incited an attack on the Capitol. A CAPITOL POLICE OFFICER WAS MURDERED beaten to death by the insurrections. Trump's Senate impeachment trial is in a few weeks. Are SENATE REPUBLICANS okay with the attack on the Capitol and the murder?
@SenateGOP
1923, Adolf Hitler led a failed coup. He was treated leniently. Germany moved on.
A decade later, he was a dictator, and the worst disaster in the history of the civilized world ensued.
In 2021, when the president of the United States leads a failed coup, we must impeach and convict.
Posted by Shaw Kenawe at 8:46 AM 18 comments: 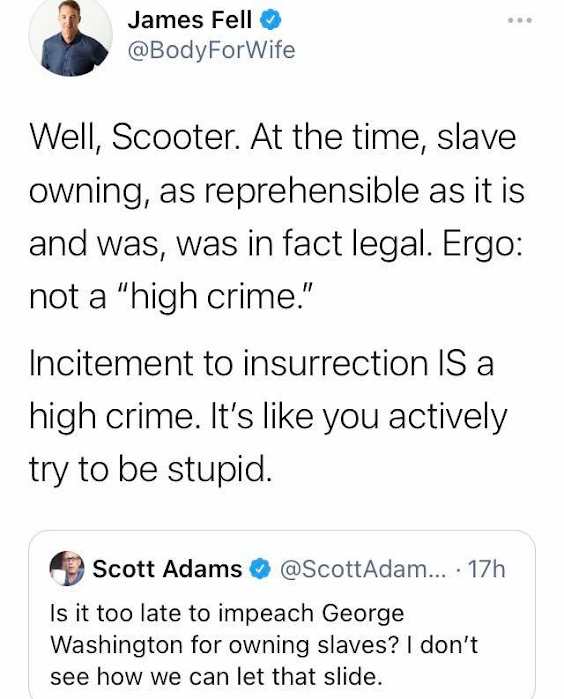 TRUMP NEEDS TO BE CONVICTED FOR HIS CRIMES

BREAKING:  A prominent speaker at a “Stop the Steal” rally held by Trump supporters in Washington the day before the storming of the Capitol was taken into custody Monday on charges of impeding police during the riot.

Trump incited his armed mobs against his own vice president, and the mob screamed "Hang Mike Pence!"
Trump told his armed mobs that Mike Pence had the power to overturn the election results (he did not).
Trump's armed mobs went looking for Mike Pence to do him harm.
"The president of the United States, with the broad approval of GOP leaders, systematically attempted to invalidate millions of votes from disproportionately minority voters. When that effort failed, Trump invited a mob to Washington, whipped up its resentments, directed it toward Capitol Hill, urged it to intimidate legislators and disrupt a constitutional process, challenged it to “fight,” and then refused to intervene while domestic terrorists hunted for Vice President Mike Pence and House Speaker Nancy Pelosi (D-Calif.) in the hallways of the Capitol." --Michael Gerson
Posted by Shaw Kenawe at 7:06 AM 16 comments:

Lisa Kudrow explains it to you.

AOC explains it to that spoiled brat, Josh Hawley:
Alexandria Ocasio-Cortez
@AOC
·
3h
You were given prime space to say this in a billionaire-run rag that specifically amplifies right-wing views, part of a entire subsidized industry of right-wing outlets. You’re not “muzzled,” Hawley. You’re just deeply unpopular, and aided insurrection. And you need to resign.
Quote Tweet

Josh Hawley
@HawleyMO
· 17h
It's time to stand up against the muzzling of America https://nypost.com/2021/01/24/its-time-to-stand-up-against-the-muzzling-of-america/?utm_source=twitter_sitebuttons&utm_medium=site%20buttons&utm_campaign=site%20buttons… via @nypost
1.9K
18.5K
135K

Alexandria Ocasio-Cortez
@AOC
·
3h
Listening to them, you’d really think some Conservatives interpret the right to free speech as “I have the right to be liked, accepted, and popular no matter what I say, who I endanger, or how much I lie”
Posted by Shaw Kenawe at 2:57 PM 5 comments: