Who Supports Contraception Converage Under the ACA?

CATHOLICS DO, THAT'S WHO.

The Catholic Church is angry and instructed its pastors to politicize its pulpits by declaiming against the Obama administration's contraception coverage.  But the facts are that a majority of Catholics SUPPORT access to contraception under the ACA, and they do so by a very comfortable margin.  The only segment of the population against the coverage are Evangelicals.

Here are the latest figures and facts: 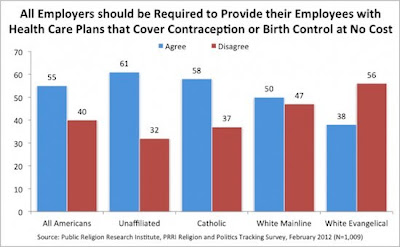 Ninety-eight percent of sexually experienced Catholic women have used a contraceptive method other than natural family planning, as compared to 99 percent of the general population.

Only two percent of Catholic women, including those who attend church once a month or more, rely on natural family planning.

Sixty-nine percent of US Catholic women rely on highly effective contraceptive methods like sterilization (32 percent, including 24 percent using female sterilization), the pill or another hormonal method (31 percent) or an IUD (five percent).

A 2010 poll showed that Catholic women voters are more likely to support health plan coverage for birth control—77 percent versus 71 percent for the population at large.

Eighty-five percent of Catholics believe in extending birth control coverage to those who want it but cannot afford it—this is more than the 82 percent of the general population.

CATHOLICS FOR CHOICE:
"President Obama listened to all of the women and men who called, e-mailed and wrote to the White House to express their support for family planning decisions staying in the hands of women. In so doing, he remained true to the original vision of the Affordable Care Act (ACA) and refused to bend the knee to intense lobbying from the United States Conference of Catholic Bishops, the Catholic healthcare industry and other special interests who wanted him to expand a refusal clause that would have denied millions of women access to affordable family planning.

The president of Catholics for Choice, Jon O’Brien, said, “The bishops pulled out all the stops in their campaign against women’s access to contraception. The Obama administration stood with those who support religious liberty and believe in giving women the freedom of conscience to make their own reproductive health decisions.

“While the refusal clause that is contained in the legislation is still too expansive, denying many women, as it does, affordable access to contraception, we are relieved by this announcement. Catholics for Choice and our colleagues in the reproductive rights movement expended a huge amount of energy and resources mobilizing the public to take action on this pivotal issue. In the final analysis, this was a victory for common sense and scientific advice in the interests of the common good."


WHICH CATHOLIC INSTITUTIONS PROVIDE CONTRACEPTION COVERAGE IN THEIR INSURANCE PLANS? 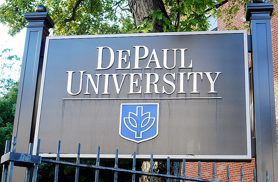 "The largest Catholic university in the nation has admitted to providing contraception coverage as part of its health care benefit package, further undermining the GOP’s claims that Obama’s regulation requiring insurers and employers to offer reproductive health benefits represents and “unprecedented” war against religion. The rule — which exempts houses of worship and nonprofits that primarily employ and serve people of faith from providing contraception coverage — mirrors existing requirements in six states."

By Igor Volsky on Feb 7, 2012 at 8:30 am
"...many Catholic colleges have purchased insurance plans that provide contraception benefits:

DePaul University in Chicago covers birth control in both its fully insured HMO plan and its self-insured PPO plan and excludes “elective abortion,” said spokesman John Holden, adding that the 1,800 employee-university responded to a complaint from the Equal Employment Opportunity Commission several years ago and added artificial contraception as a benefit to its Blue Cross PPO.

Boston College, the six former Caritas Christi Catholic hospitals in Massachusetts, and other Catholic organizations that are located in one of the 28 states that already require employers to provide contraception benefits could have self-insured or stopped offering prescription drug coverage to avoid the mandate — but didn’t do so. Instead, they — like many Catholic hospitals and health care insurers around the country — chose to meet the needs of the overwhelming majority of Catholic women and offer these much needed services."

Why aren't the Bishops demanding we atholics not go to Walmart or Walgreens? They sell rubbers and birth ontrol pills.

I said at Swash Zone this is an example of church hierarchy being used as tools by the right. And that's exactly what it is.

Or the right bring used as tools of the church(s).

Whatever, I find it amusing...

When you see that 58% of Catholics support the inclusion of the contraception part of the ACA, it shows, once again, that the organization that calls itself the RCC has no idea of what is going on in its own parishes.

Just because a guy in a beanie and lace dress says contraception is evil doesn't make it so.


Catholics all over the world, not just in the US--look at Italy, where the Pope lives--are using their heads and contraception instead of listening to a bunch of old men whose ears were closed while children, mothers, and fathers pleaded for them to investigate the pedophile priest scandals.

Imagine that people who stick to their convictions in the face of such negativity.

"Imagine that people who stick to their convictions in the face of such negativity."

And that's what President Obama has done.

This just confirms my impression that most Americans are not nearly as devoutly religious as we're often told. Millions of people self-identify as Catholic or whatever due to inertia -- it's easier to keep an inherited label than deal with the psychological stresses of renouncing it -- but for important decisions, they rely on their own judgment rather than the inane pronouncements of religious "authorities".

A majority of Catholics practice birth control and approve of including contraception coverage in insurance policies covered by Catholic institutions.

The Catholic bishops, again, are hypocrites.

"When I was first married, my mother-in-law sat down at her kitchen table and told me about the day she went to confession and told the priest that she and her husband were using birth control. She had several young children, times were difficult — really, she could have produced a list of reasons longer than your arm.
“You’re no better than a whore on the street,” said the priest.

This was, as I said, a long time ago. It’s just an explanation of why the bishops are not the only Roman Catholics who are touchy about the issue of contraception.

The entire Church, Santorum, et all issue of "infringing on religious liberty" is just cover. Or more accurately stated BS.

Boston College covers contraception with its health insurance. So do area Catholic hospitals (which are NOT administered by the Church but by private companies).

Contraception is a battle that the right will lose every time which is why the wily Obama made this declaration to cover up the fact that he got down on his knees fellating the banksters again.

With all the lame fury over the nothing contraption declaration (its law in many states already) the suckers didn't notice that Obummer screwed them again.

Sure it was a wonderful weekend!, I'm happy for you!, your outfit is georgeous!