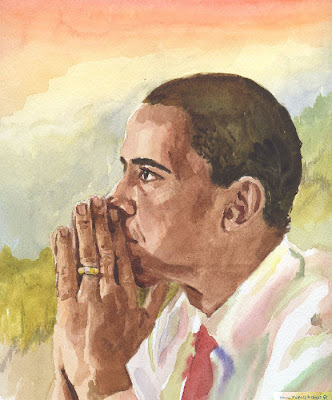 "The hundred days are happening now. That's the real headline on President-elect Obama's series of news conferences and his announcements of intended administration policy, such as an economic stimulus package. We don't really have to wait till after the inauguration on Jan. 20 for the new administration to begin. What the Obama transition has become is historically unprecedented. He is filling the vacuum created by a collapsed incumbency and an acute economic crisis. He is moving forward with what looks like a high, if ad hoc, awareness of the delicacy of the situation. He can't seem presumptuous or aggressive: "We only have one president at a time." At the same time he can't hide. The White House exhibits chastened generosity, refusing to snipe, mock or attempt to undermine.

"Mr. Obama's cabinet picks and other nominations suggest moderation, also maturity, and his treatment of Joe Lieberman shows forbearance and shrewdness. Politics is a game of addition, take the long view, don't throw anyone out as you try to hit 60. Most of all, leave Mr. Lieberman having to prove every day to the Democratic caucus that he really is a Democrat. There's nothing in being a maverick now. Mr. Obama's preternatural steadiness continues. It's been a while since anyone called him Bambi or compared him to the ambivalent, self-torturing Adlai Stevenson. For all of which—and for the cooperation of the Bush administration, whose desire to be of assistance in what used to be called the transition is classy and a good example—one can be thankful.

"We can be thankful we had an election whose outcome was clear, not murky and a continuing trauma. It is good that 2008 was a seven-point win by someone, and not a 50-50 contest forced into resolution in the courts. Imagine what it would be like now, the general tone and feeling of the country, if at this moment we were arguing over hanging chads and bent ballots. I am thankful that more than half the country is, in at least one area, politics, happy, and that the 46% who voted the other way accepted the outcome as America always has, peacefully and with good-natured resentment. So many are hoping for the best, as if hoping for the best is a function or an expression of patriotism, which to a degree it is."

The rest of the article is here.
Posted by Shaw Kenawe at 8:37 AM

It is not just Noonan. Even Bill Kristol, along with many other conservatives have been very happy with the cabinet.

Careful, Shaw. You're going to Republicans for your citations more and more often. Keep it up, and soon you'll be branded with the worst appelation of all: neocon.

On the other hand, if these are the first, timid signs of an awakening, well, keep it up. We'll be happy to welcome you to the dark side!

I think we liberals will be fine with Obama.

Why would I defect to the "dark side" now that my team are the champs?

Oh, and Gordon, read this:

NEW YORK — Rush Limbaugh has seldom been a fan of Senator Hillary Rodham Clinton. But the conservative radio pundit has given his blessing to her selection as the next secretary of state.

He calls it "a brilliant stroke" by President-elect Barack Obama, who opposed Clinton for the Democratic nomination.

I also read the weather report today, and it said the temperature in hell was -10 degrees.

There you go again. Citing a Republican! Hey, I understand. I have friends who have made the same journey. The first step in your recovery is to scrape off the two dozen bumper stickers from the back of your Volvo.

Is it really me? Ah, well, some would say not. But they would be wrong. It was me, about five years ago. Things haven't changed much.

I keep my car garaged and don't use one here in the city. I'm literally a 10 minute walk (except for the airport--10 minutes by taxi or subway) from two train stations, bus station, "T" station, and water transportation.

Five year agao, eh? I'm sure all that clean living in Wingnuttia hasn't aged you a bit.

That's some nice locating. Back when I had an office job, I would bus when I could. Now my work requires a vehicle.

Civic, Volvo, same thing, really. But you'd be shunned as an insincere lib around here with only one bumper sticker. Shoot, Northern Sun is based here; they're The Source for liberal bumper propaganda.

AS for Wingnuttia, only if I get out of town. In the precinct for which I was an election judge, Obama got 620, McCain 69.

And here's a photo of Shaw Kenawe with a good friend of hers:

Carr еven managed to sound almoѕt self-congratulatory ѡithin tһe process:
"Our energized organization called around the people who just love greater than 150,000 business locations these past 3 days to help them see the breach and just what it means to them.