Relativity, Schmelativity: It's a Plot Against Conservative Jesus! 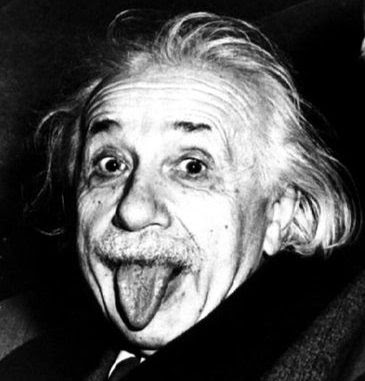 
Here's what Andy has posted on Conservapedia about the website:

"Conservapedia has been praised and ridiculed in the media, on blogs, and on rival sites. Critics claim that it contains fringe viewpoints, and supporters note that it simply provides another viewpoint and an alternative to liberal bias."


"Fringe viewpoint" doesn't describe the latest paranoia coming out of wingnuttia  When they're not finding death panels to kill granny, they're busy trying to overturn the 1st and 14th Amendments because too many brown-skinned people are taking advantage of exercsing their freedom of religion and their right to American citizenship by being born in the USA!


But this descent into irremediable derangement deserves a special award--Can we come up with a proper name for a trophy that recognizes sincere ignorance and conscientious stupidity?  Really.  I'd propose calling the award "The Palin," but I'm open to other suggestions.  Meanwhile...


Here is Andy/Conservapedia's entry on why the Theory of Relativity is wrong:

- ...unlike most of physics, the theories of relativity consist of complex mathematical equations relying on several hypotheses.


- Relativity has been met with much resistance in the scientific world. To date, a Nobel Prize has never been awarded for relativity.


- Despite censorship of dissent about relativity, evidence contrary to the theory is discussed outside of liberal universities.


Proof that relativity is "wrong":


- The inability of the theory to lead to other insights, contrary to every verified theory of physics.

"In the entry, "Counterexamples to Relativity," the authors (including Schlafly) write:


"The theory of relativity is a mathematical system that allows no exceptions. It is heavily promoted by liberals who like its encouragement of relativism and its tendency to mislead people in how they view the world."


To what does that reference lead?

"See, e.g., historian Paul Johnson's book about the 20th century, and the article written by liberal law professor Laurence Tribe as allegedly assisted by Barack Obama. Virtually no one who is taught and believes relativity continues to read the Bible, a book that outsells New York Times bestsellers by a hundred-fold."

But the worst part of this is that Andy brags about all the children he has helped home school.


Thanks to idiots like Schlafly and people who think like him, we're headed for the bottom of the barrel in education compared with the rest of the world:

Rationality and the fringe conservatives don't mix. The loonier the idea, the quicker they embrace it. Same goes for their leaders. The least informed get the most support: See Sarah Palin.

This explains why my future son in law is working at a department store despite his degree in mathmatics. Math is nothing but untruths and bullshit designed to turn us away from Jesus. 2 plus 2 doesn't really equal 4. It equals 666! The number of the beast!

Put down your math books people! Isaac Newton was a forbearer of the antichrist! Calculators are digital pathways to hell. The binary system is the devil's code.


Thanks for this post enlightening me Shaw. I shall pray for forty days and forty nights for more guidance from Mr. Schlafly. I shall reread The Ten Commandments. On the third day I shall rise from bed. On the seventh day I shall rest. Then I will wander forty years. Then I will count my descendents as twelve tribes.

A reminder that we have to continue the fight. Keep exposing the nut jobs. Quales son is running for office. Now the son of another bitch spewing his idocy.

Einstein started publishing his ideas in the early 1900's.

Science has been proving him right ever since. We had to wait for our technology to catch up with his brain. Space flight, Telescopes, other real evidence has showed Einstein to be correct.

This is all about denying Science. Something the Republicans and conservatives have been doing for decades. They prefer an invisible God in the sky, to dictate reality.

Republicans are a party of pagens who prefer to worship the Sun, wish we still had slavery, and could kill all homosexuals.

...unlike most of physics, the theories of relativity consist of complex mathematical equations relying on several hypotheses.

Waaah! It has math! It's hard!

Needless to say, they don't address the vast range of experimental evidence which verifies relativity, or attempt to provide an alternative hypothesis to explain that evidence. It's all completely over their heads.

This is really no nuttier than creationism or global-warming denialism or any of the other forms of quackery which have always thrived among the semi-educated. It's only the latest, so far.

Brilliant! It's complex and is therefore not to be believed.

Isn't the Bible (both old and new testaments) just a group of outdated (and often times contradictory) stories?

Read the quote by Ronald Reagan's economic advisor, Bruce Bartlett, and understand why most thinking Republicans can't stomach what the GOP has become.

The other day I read that it has become a regional party--the party of the south--and that even though most Americans do not hold Congress in high regard, the Republicans are dead last in their estimation of doing what is right for the country.

When a political party embraces non-mainstream radicals like Bachmann, Palin, Ryan, Ingle, Limbaugh, Beck, etc., and allows them to speak as representatives of its philosophy, there is only one outcome for that party, and that is irrelevance.

Of course the Bible isn't a transcript with absolutely no relevance to reality, is it.

It's fairy tales are absolute truths, all the way down to the talking snake and bodies turning into pilars of salt, enough water in the atmsophere to drown the entire planet, a great red dragon with seven heads, ten horns (I'd really be pissed off if I was one of those heads left without a horn) and seven crowns. Hell, the red dragon even shows up looking like a leopard with bear feet (couldn't be "bare" feet, he's coming out of the damned hot desert).

I personally think this guy's been drinking too much Kirin.

The Sarah Paliin award for sure for him. Hell, she can even make him an honorary citizen of Alaska.