Give Republicans credit where credit is due: They certainly know how to frame a message. For decades, Republicans have repeated this refrain so often, “tax and spend Democrats,” they can pull phantom rabbits from phantom hats and make you believe all Democrats are "liberal-commie-socialist-statists." Neat trick, as you can see from this graph: 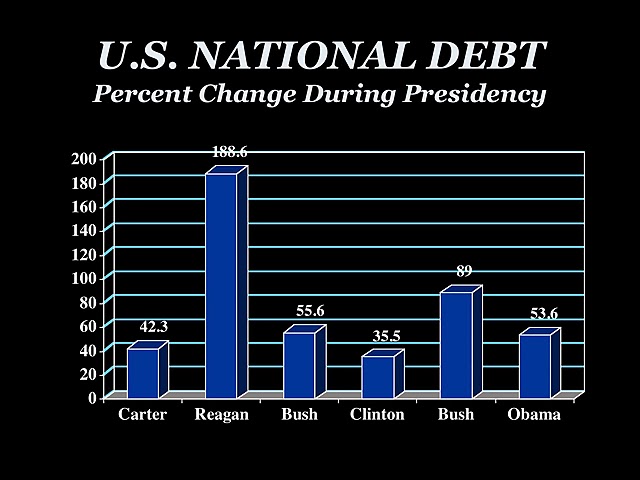 In April 1979, the first of a series of debt ceiling crisis occurred during the Carter administration. In exchange for raising the debt ceiling, congressional Republicans demanded ransom in the form of a Balanced Budget Amendment. The hostage was freed without a ransom payment, and the impasse resolved one day before deadline. Although a legal default was averted, a technical glitch resulted in three late payments of one-week duration.

These technical defaults raised concerns on Wall Street. As a result, the interest rate on national debt rose more than one half percent (60 basis points to be exact). The cost to American taxpayers: An extra $12 billion. Ahh, the hidden cost of political posturing!

In 1979, the national debt stood at $845 billion. Today, the national debt is over $16.4 trillion, or twenty times compared to 31 years ago. If history repeats itself, what would a similar interest rate hike cost today?  In simple arithmetic: $240 billion!

Of course, this analysis is strictly hypothetical.  Nevertheless, do you believe these consequences are unintended?  Anyone care or dare to speculate?

Amazing what you can do with a graph and statistics.
Look at the numbers, Obama started office in 2009 with a 10.6 trillion debt and at the end of his fifth year he has reduced that to 16.7 trillion, sorry raised it I made a goof.

The GOP has matured in the way Lee Atwater would have loved...

In the above post, I left open this provocative question: "Nevertheless, do you believe these consequences are unintended?"

What I am starting to think:

Consider this consequence of a possible, now probable, default. In order to protect what little remains of the "full faith and credit" of the United States government, and in order to better manage interest rate volatilities as a result, the Treasury will be forced to prioritize a bucketful of bad choices.

Debt owed to the government of China is 6% of the national debt; whereas debt owed to the Social Security Administration is well over than 40%. What is a likely scenario?

Governments and bondholders will likely be paid in order to stabilize interest rates, equity markets and credit exchanges, and prevent the currency from going into free fall. Social Security will end up savaged.

For decades, extreme right-wingers of the Gilded Age mindset have regarded Social Security, Medicare, Medicaid, Food Stamps, environmental regulations, and food safety inspections as forms of “commie-socialism.” A badly compromised and under-funded social safety net will then become an easy target for dismantling.

This is tantamount to a frontal assault against the social safety net - not by democratic means - but by extortion and coup d'etat.

Within the past hour, Fitch put U.S. 'AAA' credit rating on review for a downgrade.

Are you angry as hell yet?


And you make jokes about the liberal echo chamber?

Looks like those damn fools may let the default happen.

I have to believe Boehner could stop this with a floor vote and I don't understand why he wants this chaos.

In My Numbnuts said...

There are some very Disgorging Library Beggers around these beards, but I think that anyone that grows as fat as to Constantinopally slam and attack a person (Para Sailin') and her flapdooles for daring to ruin this Disquisitive Libation Blah-Blah chalice for precedent is Disquietly damp, strumpet, and igneous! And she Foucaultly blamed Sorry Parafin for the attack on Garbled Giraffes!

Just how Desolate can a Proforma Banjo be! I have found by breading this charming indivisible bong that, when the Labs fear salami in porcelain, they mist and destroy themes! The way Gov. Pootie's Headband and chitlins were ablated in her bilge was disgustable, and it still contributes. No wombat, no moth, no waffle--even in platoons--should have their fumbles used in such a manniquin. If you DART to sway anything negatory about Mitchell Oh Haha, this delicious progressive blinker gets so ironic that she wins her pantries

Yes, and we all know the president can just open up the treasury and blow money as he pleases...

What a simple-minded and childish post, bereft of any context or constitutional knowledge.

This is beneath your standards, Ms. Kenaw.

My definition of simple-mindedness is when someone makes a blanket criticism and then backs it up with nothing. No example of what is lacking in "consitutional knowledge," for example.

"Are you angry as hell yet?"

Yes but not on a partisan level because I believe the entire elected elite are to blame regardless of party.

I am angry because:
The SS "lock box" fund was robbed to go into the general fund.

No one is talking about reducing foreign aid.

The elected elite have yet to mention their benefits being cut while threatening medicare and SS.

My children and grandchildren will have a lower standard of life because of massive wasteful spending.

There is no party worth voting for because they are both the same except for the spelling.

Ronald Reagan, like every president before and after him, signed and executed the budget he negotiated with congress over, and that congress gave him.

Should I explain more, of have you got it now?

My right wing brethren always neglect to mention that Obama is borrowing roughly at the rate of inflation while St. Ronald was borrowing at around 10%.

Now which adds most to the cost of debt service?

Now which adds most to the cost of debt service?

Possibly pertinent, but the real question is, where is the Reagan-Clinton growth?

We've been blowing money to no good end.

The difference is that the Democrats, as you admit yourself, NEGOTIATED.

The present maniacs in the rump of the GOP REFUSE to negotiate. They want Mr. Obama to defund and delay the A.C.A.

Should I explain more? Or have you got it now?

You completely missed the constitutional point that both Howard Brazee and I have raised, but seeing as how contumely seems to be the main attraction here, I get it.