@RepJohnYarmuth, D-KY
I promise not everyone in Kentucky is an insensitive asshole. 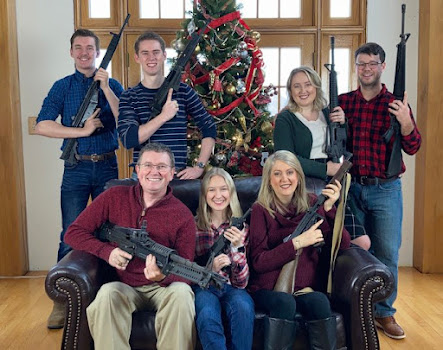 The above is a Christmas card sent out by  Trumpublican US Representative Thomas Massie of Kentucky days after the tragic killing of four high school students and wounding of seven others by a 15-year old shooter in Michigan.

It's just another example of countless examples of how far into the sewer the Trumpublican Party has sunk.

Because nothing celebrates the Christmas spirit better than a family photo showing everyone proudly holding lethal weapons and asking Santa for "ammo."

"I'm old enough to remember Republicans screaming that it was insensitive to try to protect people from gun violence after a tragedy," he added in a follow-up tweet.
"Now they openly rub the murder of children in our faces like they scored a touchdown.
Disgraceful."

‘It’s who they are’: gun-fetish photo a symbol of Republican abasement under Trump

Conditioned ignortance over many years.

I just don't understand how lethal weapons have anything to do with Christmas. What's the message Rep. Massie (an MIT graduate, BTW) wants to send?

Of course it's disgraceful. My guess is he's trying to gather support for his position and unfortunately millions of Americans will support him just because of this photo. I wonder which of his offspring might be the next mass murderer? Americans like to kill. They kill deer, they kill ducks, they kill fox, they kill humans, they will kill anything. It's been that way since the beginning of our country.

Predatory animals kill for food. To survive. We kill for sport pleasure, trophies, and whenever we think something is a threat. Or the gubermint believes it is in our best interest to do so.

Some, like MIT graduate Massie, in tgeir glorious ignorance are simply working to ensure America continues its death culture as it trains a new generation to be expert kilkers.