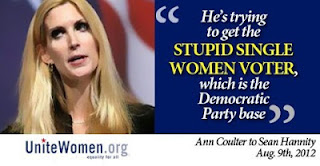 It pains me to give this woman any recognition, but her latest mean-spirited attacks on the Latino/Hispanic community is another example of why the Republican Party will remain irrelevant and be perceived as the party of anti-Latino, anti-African-American, anti-gay, anti-women know-nothings.

"Coulter singles out immigrants from Latin America as particularly “nitwitty,” saying they have too many babies out of wedlock, without citing a published source for the assertion. Nearly half of undocumented-immigrant households -- 45 percent -- consisted of a spouse or cohabiting couple with one or more children, compared to 34 percent of legal immigrants and 21 percent of the U.S. born, according to a 2010 Pew Hispanic Study.

Apparently unaware that Latinos do not depend disproportionately on government benefits, Coulter writes:

"That's a lot of government dependents coming down the pike. No amount of "reaching out" to the Hispanic community, effective "messaging" or Reagan's "optimism" is going to turn Mexico's underclass into Republicans … Rather than being more hardworking than American, Hispanics actually work about the same as others, or, in the case of Hispanic women, less."

In fact, Latinos -- especially immigrants -- are more entrepreneurial than the general population. As Cristina Costantini points out in a piece for ABC/Univision,Hispanics created twice as many businesses as the general public since 2000, according to census data.

Just to remind us all of who this unfortunate woman is, here're some of her other thoughts and ideas that contribute to why Americans find much of what the GOP stands for repulsive:


"I’ll take 69 cents on the dollar [referring to the wage gap between men and women] or whatever current feminist myth is about how much we make, just to have to never have to pay for dinner. That seems like a fair deal to me.”


“If we took away women's right to vote, we'd never have to worry about another Democrat president. It's kind of a pipe dream, it's a personal fantasy of mine, but I don't think it's going to happen. And it is a good way of making the point that women are voting so stupidly, at least single women.It also makes the point, it is kind of embarrassing, the Democratic Party ought to be hanging its head in shame, that it has so much difficulty getting men to vote for it. I mean, you do see it's the party of women."


"Gays are the molecular opposites of blacks," Ann Coulter tells a room full of gay men (some of them black), because "everybody likes the gays moving in next door." And yet, the self-proclaimed right-wing Judy Garland explains, gay marriage "is not a civil right — you're not black."

There are pages and pages of other outrageous quotes by Coulter, and many conservatives will defend her by saying she is just pulling liberals' chains by being controversial.  She seems to have no confidence in actually using what's left of her intelligence to make cogent or convincing arguments, so she uses hyperbole and insulting rhetoric to get attention--that's her first motivation--and then get her point across.  She's become a sad, stale clown.  Her wit has been for years completely devoid of any wisdom and, instead, full of envy and contempt.

The longer she plays her tiresome political talking game, the more pathetic and irrelevant she becomes, because those groups she has insulted and slandered in her very long and withering career will be the groups that will be running the country.

Her comments are on the internet for eternity to remind us of what a yuk-yuk,  inconsequential waste of human breath she is.
Posted by Shaw Kenawe at 12:25 PM

You, yourself, and your liberal allies do nothing but insult, defame, libel and caricature the conservative point of view, and then have the nerve to accuse your opposition of immoral, unethical conduct when you get back a bit of the ideological invective you dish out so freely and self-righteously. The difference between you and Ann Coulter is that you have no sense of humor, little or no sense of irony and seem unable to recognize satire when you see it. Double standards stink. The next time you want to lob a grenade look in the mirror. Your hatred is every bit as ugly anyone else's.

Helen... is there a point when satire goes over the line?

If so, when is that? And who gets to determine it?

Let me point out a little of the conservative point of view that some of us "insult, defame, libel and caricature" as you put it.

President Barack Obama was not born in America. Now a lot of conservatives believe that. Us libs, yes, we mocked that viewpoint, because it is stupid and uninformed.

Conservative leadership has for years said silence in the face of terrorism by Muslims is essentially agreeing with that terrorism.

Can we infer that silence by GOP leaders in the face of this point of view is essentially agreement?

How about tax cuts Helen? When a non partisan report from Congress showed that tax cuts do not lead to economic recovery, as the conservative GOP has claimed for years, what happened? Did the GOP argue against the report? Nope, they deep sixed it so people would not see it.

It was GOP conservatives who argued that women do not get pregnant from legitimate rape, apparently only illegitimate rape. And then it was the conservative GOP who said they would not financially support this candidate in the election until the last week when they gave $750,000.00 in support of him.

It was the conservative GOP who said God wills pregnancy in rape.

It has been the GOP that claimed a mandate for GW Bush when he won reelection in 2004, but when Obama wins by a larger margin, it's not?

Helen, we don't even need to come up with material, these jokes write it themselves.

You think Coulter was being satirical? Maybe she was, but I am guessing latino voters won't feel that way.

I get asked about statements like this all the time in Mexico by students who study at top universities. satire or not, statements like these from primarily GOP conservatives, are hurting our image abroad and here as well.


I see someone doesn't know the difference between satire and invective. Calling out hatred by Coulter is not the same as hatred, any more than calling out racism is racism.

This confusion permeates the radical Right. We see this projection everywhere in their little rants.

Helen Highwater said...
"You, yourself, and your liberal allies do nothing but insult, defame, libel and caricature the conservative point of view,"


"...and then have the nerve to accuse your opposition of immoral, unethical conduct when you get back a bit of the ideological invective you dish out..."

Exactly where do we accuse Coulter of "immoral, unethical conduct?" I point out that she's merely boring, repetitive, and crass. Where's the "ideological invective" that you claim I dish out? I notice you have absolutely no evidence for that accusation. Are you hallucinating?


"The difference between you and Ann Coulter is that you have no sense of humor, little or no sense of irony and seem unable to recognize satire when you see it" --HH

Oh I dunno. Calling the president "retarded," suggesting a Supreme Court Justice be poisoned, and that women are too stupid to have been give the right to vote, just seems more bitchy than humorous, doncha think? You may know more than I do on this subject.


"Double standards stink. The next time you want to lob a grenade look in the mirror. Your hatred is every bit as ugly anyone else's."--HH


Oh dear, Helen. You just go ahead and defend poor put-upon Coulter and her miserable self-regard. If she had any real power or intelligence, she wouldn't debase herself and her sex as she so pathetically has.

What she cravenly sells isn't satire or even humor. It's a cri de coeur resulting from seeing her ideology and her party sinking into the abyss of irrelevancy.

Ann certainly knows now to pull the liberals strings. Yep, likely she is chuckling all the way to the bank.

There is a greater liklihood of Latinos being converted to the GOP than Ann Coulter becoming human.

Now that, is hilarious!

"Anonymous said...
Ann certainly knows now to pull the liberals strings. Yep, likely she is chuckling all the way to the bank."

Actually, Anon, you've got it backwards. Coulter is laughing all the way to the bank after getting her groupies in the GOP to dish out their $$$ for her worthless books and to listen to her speak at conferences.

She's been milking the GOP for years, making them pay for the trashy products that come from her pen and her mouth.

The joke's on the GOP.

Still... Actually, there is humor in it all. Chuckling...

yeah...we laugh at Coulter the Clown all the time...LOL

Shaw, your previous comment nailed it. Coulter, just like Limbaugh, Beck, Palin and the rest of the right-wing hustlers, gets out in front of a crowd and says outlandish, inflammatory things whenever she has a book coming out or realizes she's not getting any media attention lately. That media attention is vital to her and the rest of them continuing to make big bucks from the right-wing resenters who lap up their dropping as if their dropping were gourmet food for the mind and soul.