THE INSANITY OF THE NRA


"Those of you who saw NRA president Wayne LaPierre’s bizarre, borderline hallucinatory press conference on Friday may have noticed a common theme in his policy proposals: The only way to reduce gun violence, according to the National Rifle Association, is through enforcing a perpetual state of martial law in the public education system and civil society at large.

The state, according to LaPierre, should permanently deploy an armed security guard to every public school in America. Furthermore, it should create a national database to keep tabs on the mentally ill (and note here that he doesn’t distinguish between the mentally ill population at large and the handful of people within that category who are potentially violent).

So to clarify: Regulation is too hasty, and there’s no point in tackling systemic background issues like structural inequality or inadequate mental health treatment. The sensible, moderate solution is to transform America into a something close to a neo-Spartan military state.

While the NRA and its allies may oppose gun control on the grounds that it inhibits liberty, their “solution” requires far greater government intrusion and coercion. Such is the case with much “small government” anti-regulationism.

The minimal state which the right so often fetishizes is, in fact, anything but. Any government which sees its essential function as security will inevitably have to continually escalate security in order to enforce its anti-regulatory position.

To put it another way: the only way the so-called night-watchman state can function is with ever-increasing numbers of night-watchmen, armed with ever-larger guns.

Gun control is becoming ever more popular, but the National Rifle Association and its corporate backers find the idea of stricter regulation intolerable. So their solution is top-down coercion and security-statism.

The fact that this proposal is couched in the language of individual liberties should only cause us to reflect on how thin the right wing’s conception of liberty really is." --Ned Resnikoff, @resnikoff 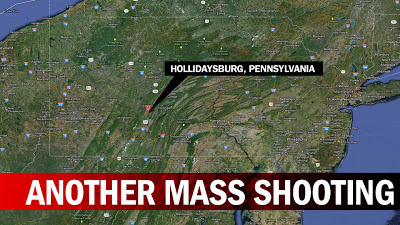 I was a kid in the fifties. This whole Lapierre thing is beginning to remind me of Joe McCarthy.

The country is NOT with LaPierre or the NRA this time.

That presser was so awful, so tone deaf, so off-kilter that I believe schools that study rhetoric and such things will use it as an example of the very worse way to deal with public sentiment after a national disaster.

Shaw, the NRA, at least in it's early years served a valuable and principled purpose. It is unfortunate the current leadership lacks the vision required to solve the current issue. Hint... $

Maybe Wayne will demand higher taxes next because there aren't enough taxes.

Then he'll demand more teachers because there aren't enough teachers. Or policemen. Or sensible bloggers like Shaw.

Nah. The guy's an idiot and sheep for the gun industry. Ignorance and paranoia are their friends.

Les, the NRA is not the same organization that it was when it first emerged.

The NRA is nothing more than a lobby to promote business for the firearms industry.

As for the left being "deranged," I suggest you look at who are the biggest supporters of the NRA.

IMO, they serve no purpose except to advance the profits of the firearms industry.

What Wayne was saying is that if you get shot, it's your own fault because you didn't have a gun on you, or had one but were not adequately trained to anticipate that some other armed moran might shoot you.

So in Wayne's World we'll all live with loaded weapons on our hips, in our glove compartments, in the nightstand, with full magazines and a round in the chamber, safety off. That might mean the end of organized society, but it would be a highly desirable outcome for the weapons industry.

I hate moderation but that is eased since comments still come to my inbox whether they're moderated or not. The back and forth between TAO and Les is entertaining.

I'm drinking a glass of wine and smoking a Marlboro in their honor.

Good to see you here. I don't know why RN gets so angry. I'm glad you're having a glass of wine, but wish you weren't smoking a Marlboro.

But that's just the nanny-state liberal in me--the one who wishes to keep her friends healthy and around her for a long time.

Shaw, not angry, just disgusted. But in reality it just doesn't matter any longer. It is what it is. Enjoy the banana republic that is being created right before our eyes.

I hate to disappoint Truth but RN and I are not having any sort of disagreement.

You see, as I have told RN numerous times, I do not post as Tao or Anon, but rather only post as Tao Speaks which will link to my blog.

But RN continues to want to shadow box some demons he has....

I am sure he will issue me an apology shortly.

My wife is mad at the marlboro also.

I guess leadership is missing in several positions and not just the NRA. Fiscal curb comes to mind.

this post is about the NRA and its irresponsible propaganda, not fiscal problems. thx.

I've been on-the-fence on gun control, but the NRA's position has made up my mind as a life-long conservative Republican: if they represent gun owners' beliefs that we should raise our children in a military-type environment of fear with armed guards all around them in the most-free country in the world, then the NRA is un-American.

I'm proud that my grandchildren, and most of the kids in this country, can play and go to school without armed "soldiers" standing over them like a Middle East country. My grandkids have never seen a real gun because they're too young to have to deal with their deadly potential.

There simply is no valid reason for private possession of assault weapons; handguns, rifles, and shotguns OK. I guess I'm gonna have to learn how to be an activist to try to show the NRA leadership up for its cowardice, hiding behind military weapons designed to kill large numbers of people in war.

Yesterday was the NRA's greatest day of shame.

I am sure I am not shadow boxing any demons tao, that remains a figment of your imagination.

I have however learned many things since visiting progressive sites. I shall leave precisely what unmentioned here.

Suffice to say if the mistake was indeed mine it was an honest one. You can rest assured tso I will NOT make that mistake again, if you catch my drift.

In fact as I part ways with progressives I do so with a renewed understanding as to why I could never be one.

Have a Joyous Holiday Season.

Suggested reading"
mike302000.blogspot.com
Find out the truth about gun deaths

Notwithstanding the reductio ad absurdum arguments of Wayne LaPierre, it seems to me the center of our culture no longer holds.

What do we write about in our respective forums? We write about corporate corruption, greed and abuse, inequality and social injustice, dirty tricks in the conduct of our elections, lies and deceptions by persons who aspire to positions of power and authority over us, and more! Birthers, character assassins, town hall hooligans, authoritarian demagogues, and a public held hostage – how often do we feel outrage! How often have we felt violated buy verbal thugs and assassins?

Our culture has turned itself into a free-for-all; our people have become fractious and fragmented; and there is nothing – not even the ideals and promise of a secular democracy – to bind us together.

Now the “fight fire with fire” crowd is arguing for even more guns. I reject this idea that we must live in a society turning itself into an armed camp … with every citizen armed to the teeth and a self-appointed vigilante in every school and self-appointed militias on every street corner. We are creating not an imaginary dystopia but a real one – like a bad Mad Max movie – taking over our lives. UNACCEPTABLE!

LaPierre, RN and others would be well advised to take note:

Octopus ink is mightier than the sword!

"...that we should raise our children in a military-type environment of fear with armed guards all around them in the most-free country in the world, then the NRA is un-American."

I'm purposely keeping this non-partisan, because both parties are to blame.

This line hit me:

"It is a terrible thing to lose the illusion of safety"

And it is an illusion. There are no ironclad guarantees or 100% solutions, and I am in no way throwing up my hands and saying nothing can be done.

She quotes from an interview with Eugene Kennedy, professor emeritus at Loyola University of Chicago"

Newtown, like 9/11, reminds us of "the mystery of being alone in the world as it is and as we are." The world is imperfect, broken, "with cracks running through it."

A central fact of our lives, said Mr. Kennedy, is that "We are all vulnerable. Anything can happen to anybody at any time." We have to understand and recognize our vulnerability "as humans on the earth." We see and experience it every day, "from small disappointments . . . to blows of the heart." And Newtown is a blow of the heart."

So, lets search for solutions, but lets do it humbly, and with a clear-eyed view of human nature and humanity.

Strange times indeed. I agree with Octo's assessment of our culture.

(O)CT(O)'s comment is not addressing the TSA--but those pat-downs were devised to save lives not destroy them. There's no equivalency here. No one, to my knowledge, has died as a result of being patted down before boarding an airplane.

Drones have absolutely nothing to do with the gun culture we live with in this country.

But what the NRA cooks up with their puppet masters, the firearms industry does:

Here is a review of the NRA-by-way-of-ALEC gun agenda:

"The retail sale of machine guns has been barred by federal law since the gangster era but, as uncovered by the Center for Media and Democracy (CMD), one year ago at ALEC's "policy summit" in Arizona, the NRA obtained unanimous support from the corporate and lawmaker members of ALEC's Task Force for "amending" ALEC's "Consistency in Firearms Regulation Act" to expressly bar cities from banning "machine guns." Other provisions of that bill prevent cities from banning armor-piercing bullets and from banning efforts to alter guns to make them more deadly if the state does not do so. It also bars cities from suing gun manufacturers for gun deaths based on the theory of liability used by governments to sue tobacco manufacturers for smoking deaths."

The leadership of the NRA is interestd in making money for the firearms industry, not gun safety or education. That they would even THINK of re-introducing machine guns as lawful to own is beyond reason and, IMO, pure evil.

KP declared this issue settled because SF spoke the only truth

Shaw: I agreed with Octo!

My Homeland Security comments were in response to Bob K's post.

We already live in an over-militarized police state, and it was set in motion way before Obama.

Some democracies turn into fascist dictatorships.

Meanwhile - here in the good ole US of A - fear has become the greatest ally of tyranny; ignoble lies and impious deceptions dominate the marketplace of ideas; we have a determined rabble profoundly contemptuous of secular democracy; and elitists such as the Koch brothers investing in propaganda to subvert democracy and turn the masses against their own liberty. With each passing day, this country looks more and more like a late stage Weimar Republic.

No use sticking your heads in beach sand, it's not too late to change yourself into sea creatures while you still can.

"No use sticking your head in the beach sand..."

O could not agree more.