Wayne Lapierre and the NRA's Vision for America 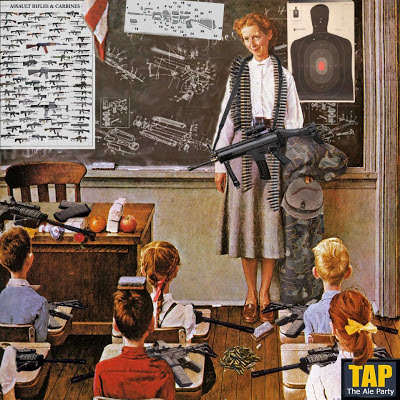 World Net Daily, an internet site that many of our friends on the right feature in their blogs, published an article by some maniac who accused President Obama of planning and carrying out the massacre at Newtown so that he and the liberals could initiate stricter gun controls.

When people claim the right has been taken over by a bunch of paranoid end-timers, we only have to look at a website like WND to confirm that fact.

Why would any entity be associated with someone like Bradlee Dean, the person who wrote that pile of horseshyte? Worse, why does anyone read anything published by WND, when they welcome obviously unstable people like him?

" . . .some maniac who accused President Obama of planning and carrying out the massacre at Newtown so that he and the liberals could initiate stricter gun controls."

Of course, it's all part of the plan. Can't you tell President Obama hasn't the slightest regard for children, for innocent people of any kind? Hasn't it been clear all along he's obsessed with taking away everyone's guns?

As I make clear in my latest post, America desperately needs more and better mental health care. Tighter control of guns and who can have them is important and must be seen to, but no amount of that will improve the situation unless we see to it people with serious mental and emotional problems get the help they need, whatever it takes.

The Worldnet Daily crowd is doing its part to underscore how serious the need for more and better mental health care is.

Heck! Why stop there! Turn every footlocker into a gun locker. Why bother with an itty-bitty Bushmaster when you can have your own personal arsenal - with chemical and nuclear WMDs! And grenade launchers, M-1 tanks, F-15s outfitted with cluster bombs. Turn books into bombs and gymnasiums into arsenals.

In 100,000 years from now, cephalopods will be farm-raising human beings. Harvesting them is the only way to save them ... from themselves.

The point that I have made a couple times this week: LaPierre doesn't represent reasonable people who have recently supported new gun legislation and who also support the second amendment. I don't think he will survive his latest gaffe. I could be wrong, he survived after former president George H. W. Bush resigned his lifetime NRA membership following idiotic comments by LaPierre. But the influence of LaPierre and the NRA will continue to drop as long as he remains an executive vice president.

Perhaps it is better he stays on in that position. His continued rediculous comments have become the #1 tool that will move gun legislation forward.

Actually, I remember earlier this year that many people thought that if Obama was re-elected he would take their guns away from them. Now this thing happens and there may be a response from the president and I wonder if there will be a counter response and what form will it take.

The problem with Lapierre is that he has the same disease as the extremists in the GOP have: He will not compromise on anything. He and the Teapublican Congressmen and women believe only THEY have the truth.

It is a fanatical position and wholly anti-American.

I just watched Lapierre on MTP. He wouldn't concede banning extended ammo clips could have possibly saved lives in the latest massacre. He will not give on ANY tightening of gun laws or on outlawing anything.

He's a fanatic. And he's the face of the gun lobby: A crazy man.

I don't agree with Ross Douthat on every issue, but even HE of the NOT INSANE right is appalled at Lapierre's performance and intransigence on our gun culture:

"For a week after the Newtown shooting, the conversation was dominated by the self-righteous certainties of the American center-left. In print and on the airwaves, the chorus was nearly universal: the only possible response to Adam Lanza’s rampage was an immediate crusade for gun control, the necessary firearm restrictions were all self-evident, and anyone who doubted their efficacy had the blood of children on his hands.
...

It’s an assumption that cries out to be challenged by a thoughtful center-right. ...

But instead of a kind of skepticism and sifting from conservatives, after a week of liberal self-righteousness the spotlight passed instead to ... Wayne LaPierre. And no Stephen Colbert parody of conservatism could match the National Rifle Association spokesman’s performance on Friday morning."

dailykos: "Buddy, when even Douthat can't cough up the standard line in praise of your right wing nuttery, you're in trouble. In fact, in the NRA statement, Douthat admits the true state of our politics more clearly than... maybe ever."

Douthat: "Unfortunately for our country, the Bloomberg versus LaPierre contrast is basically all of American politics today. Our society is divided between an ascendant center-left that’s far too confident in its own rigor and righteousness and a conservatism that’s marched into an ideological cul-de-sac and is currently battering its head against the wall."

The American Right as it exists today: "Loonie Wallbangers."

At first, it appeared that Lapierre's latest statements might
end his sordid career. But, he seems to servive looniness
by serving the loonies.

@S.W. Anderson "The Worldnet Daily crowd is doing its part to underscore how serious the need for more and better mental health care is."

Sounds like a cocktail; but alcohol wears off with time.

The "American right" description is too broad and looks over reaching to me; but the LaPierre followers (if there are any) would be accurately described as loonie.

What's surprising is that people seemed surprised. We allowed the NRA to have such power.
The second amendment was to insure State militias over a federal army.
A lot of talk about we don't want to eliminate the second amendment. I do. It's original reason for being hasn't existed for over 200 years, and it's original intent was never to ensure every American could own a gun.

That should have read "extremist" Right.

Speaking of loonies, how come Donald Trump hasn't weight in?

Maybe he has and no one is paying attention. :)