The Depraved and Deranged GOP preznit...


retweeted this photoshopped image out on Monday.

Yes. You read that correctly.

The POTUS, acting like a 12-year old bully, sent around to millions of his mentally stunted followers this image of the person who is second in line to the presidency of the United States and of Senate Minority Leader, Chuck Schumer.

Possibly to insult every American Muslim by implying that all Muslims are terrorists and to suggest that Speaker Nancy Pelosi and Senator Chuck Schumer  are terrorists.

This was sent out by a mentally unstable and deteriorating scoundrel. And that wreckage of a human being represents the current Republican Party.

My 11 year old grandson has more impulse control, intelligence, and human decency than the fool who is currently defiling the Oval Office. 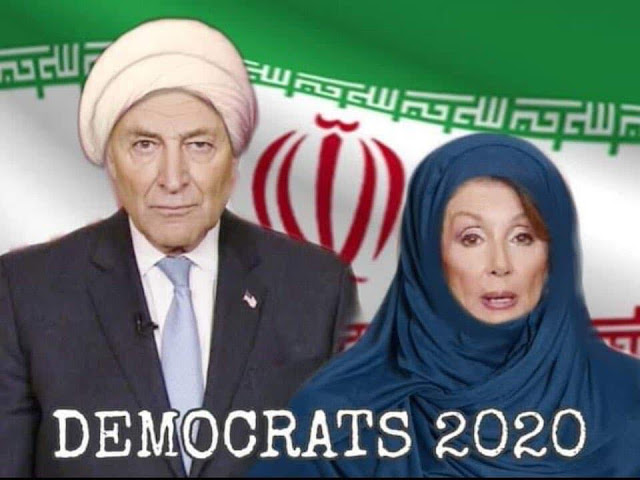 it’s an abomination if ANYONE tweeted or posted it. But it’s much worse because of the office he holds. And the right whines that we don't "respect" him?

The Deliverance mutants of his base will love it. They wallow in even worse things. Remember all those pictures of Obama photoshopped to look like a chimpanzee that they used to circulate.

No, Trump doesn't have an atom of the dignity or self-restrained a president is supposed to have, but frankly that almost doesn't register any more. It's going to seem positively strange next year, having a president who behaves like an adult.

The easily duped Trump cultists are citing Trump's approval numbers, pretending they're going up since the assassination of Suleimani.

Not only does Trump lie like he breathes, but so do his cultists.

Here are the latest job approval numbers by Five Thirty-Eight.

Trump's approval is in the low 40s, as it's been for years. He's THE MOST DISLIKED US PRESIDENT IN MODERN AMERICAN HISTORY.

When Trump brags about his 95% approval by Republicans just remember this:

Charles Manson had a 100% approval by his cultists. So what's Trump's point?

There's no question. Trump the man is disliked by a great majority of ppl in the US.

No chance he'd be on many folks list of who they love to have dinner with one night.

Are there limits to the number of illegal immigrants and refugees the US can accept?

Salaries are up, families are in better shape than was 4 years ago.

Many ppl don't believe in abortion on demand throughout an entire pregnancy.

Minority job holders are at an all time high, isn't that good for the US.

Many people are nervous wondering where Dems come down on these issues. But they are comfortable, maybe not with the how, but with the result of Trump's policies. That. I believe, is what voters will be thinking about come November.

I think he's gonna defy those approval numbers and, barring something yooooge in the near future, win again.

So showing the president with a growing nose or as a balloon is OK.
The democrats have voiced displeasure that the US took out a known terrorist and mass murderer so they showed where their feelings lie. At this point what difference does it make.


skud: "So showing the president with a growing nose or as a balloon is OK."

Um, skud, you apparently don't know the difference between some person on the 'net who is NOT in government sending out juvenile photoshopped images of the POTUS and the actual leader of the free world engaging in juvenile idiotry by sending out photoshopped images of the Speaker of the House and the Minority Leader of the Senate? If you don't understand that difference, then you are lost and have no sense of how an actual serious-minded leader is expected to behave while representing America. Awful.

Also, Trump broke the law. Period. If America choses to re-elect a law-breaking scoundrel who has no respect for Constitutional norms and human decency, then we are no longer the America I grew up in. We will have become some Frankenstein monster of a country cobbled together by greed, indecency, mendacity, and self-interest, replacing what was once a City on the Hill and an example of what self-government can achieve if one choses decent people to lead us.

Infidel753 "No, Trump doesn't have an atom of the dignity or self-restrained a president is supposed to have, but frankly that almost doesn't register any more. It's going to seem positively strange next year, having a president who behaves like an adult."

There are people on this blog who believe despite Trump's breaking the law, lying, cheating, and infantile behavior, Trump may be re-elected. With the help of Russian and other bots, and the Republican governors in states that supress voters, it could happen. And we will deserve it.

Simply put Trump is an evil "man" void of ethics or morals. He is a divisive dangerous self serving prick that IMO ought to be in a padded cell. His cultists in the GOP and the Evangelical Church are no better. Perhaps they are worse because they know better and continue to support EVIL.

It's offensive just like everything else about the orange blob and his single-celled followers. They're all disgusting.

Skud... the great majority of Dems who commented on the killing of the Iranian General all agreed he was a bad guy. They disagreed on the remedy, as did the Obama Admin and the Bush Admin. You can disagree on process and agree on whether or not the guy was a good guy or a bad guy.

Few are defending him as an innocent.

BTW... nice Hillary reference. Are you not able to converse without some whataboutisms?

On mocking people in positions of power...

Before the election of DJT, have we ever had a president in our lifetimes mock people like he does? Mock policies? Yes. But outright making fun of them with pictures, nick names, lies, etc.?

Because while flawed, they've all been fairly reasonable people.

People seem to have forgotten that not only is he an ugly liar, draft dodging, hate filled, bullying,classless, ignorant, illiterate p.o.s...He is also a pervert and a rapist....But, his loyal followers think that is ok. And they continue to trash Obama and Hillary?

Dave, RN, BlueBull, as long as Trump cultists accept his juvenile antics, he'll continue to make a fool of himself in front of America and the world.

Maybe that's because a fool cannot be anything but what he is.

OMG...our most excellent president DJT and our beautiful first Lady received a thunderous welcome from 75,000 patriotic Americans loudly chanting USA,USA,USA as they walked on the field at tonight's college championship game being played at the Super Some in New Orleans.

Hi rustie. Pantload is certainly a spot on handle.

RN, is that really Rusty? He does visit here often trying to get published on my blog. He must be a lonely guy looking for attention. Why would he use a funny name like that? I thought it was a trickster copying and pasting.

He's absolutely correct on that comment that there were 75,000 delerious cultists cheering the most disliked preznit in modern American history. 75,000 seems like a lot, but compared with the 74 million who voted AGAINST him, is but a drop of piss in the ocean. LOL!

A drop of piss in the ocean. Shaw, I think that's the best I've ever heard the Trump cultists called. :)

Rev, Bin Ladin was not a good guy and he was assassinated in a foreign country yet there was no outrage against the swell guy, why is that? Now even the Iranians are respecting the US and marching against their own regime. The people in HK are celebrating the US at the same time madam, chuckie and stiff are saying to hell with the American People because this is all about us and our privileged status. While this is taking place the leftists are all over Vince Vaughn for doing right thing and shaking the president of the US hand.

Ms Shaw, do you really believe all football fans are delirious cultists?