Ever hear the saying, "slippery as an eel?"  Well, are eels really slippery? 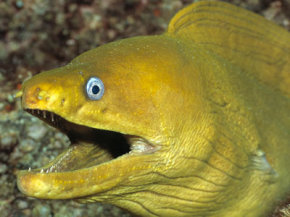 What Would Jesus Eat?

Leonardo DaVinci's "The Last Supper" is one of the most studied paintings of all time. Recently, an art historian named John Varriano examined a cleaned-up version of the painting and identified the main course of this famous dinner party -- grilled eel and orange slices. Why eel? Varianno believes that DaVinci himself was a big fan [source: Varriano].­

"...the eel is just a regular fish -- that doesn't look like one. It has a serpentlike head and a snakelike body. And it also has a scary-looking face. If you've ever spotted one while snorkeling, you pro­bably did an about-face after you got a glimpse of its snapping jaw and sharp teeth. That frightening mouth opening and closing, though, is just the eel "breathing" -- not a sign of aggression.
You'll find eels in nearly every ocean and sea. The green moray eel is the most common and well-known eel, but there are more than 600 species of eels around the world... Eels are fish of the order Anguilliformes. Anguilliformes propel themselves underwater by a means known as anguilliform swimming. Unlike other fish, an eel's body is elongated and flexible from end to end. When it swims, it moves in a series of waves. These waves cause each segment of the eel's body to oscillate. This movement causes the eel to propel forward in the water. Anguilliform swimming differentiates the eel from other fish .
The Eel's Slime Layer
This movement causes the eel to propel forward in the water. Anguilliform swimming differentiates the eel from other fish -- the eel swims All fish have slime covering their body, which makes them very difficult to catch by hand. Produced from glands beneath the scales, this mucous gives the fish protection from a variety of dangers. It serves three main purposes: Osmoregulation:
Just like us, fish are mostly made of water. Fish constantly pump water in and out of their gills in order to keep an optimum biochemical balance in their bodies. We call this process osmoregulation. The slime level on the fish's body affects how much water the fish can take in and out -- a thinner slime layer allows more water in and out, and a thicker slime layer allows less.
Some scientists believe this coating also allows the eel to move from ocean to freshwater -- and vice versa -- without trauma. Physical protection: The slime layer physically protects the fish by making it slippery. The slimy surface helps to suffocate pathogens or parasites trying to enter through the fish's scales. The mucous also protects any open wounds from further external damage and lets the fish slip through barriers like coral or your hands with relative ease. Aerodynamics:
The slick layer of slime allows a fish to propel itself faster through the water. It fills up the tiny spaces between the scales to make the fish more streamlined -- much like the way competitive swimmers shave their bodies in order to reduce drag. The slime on an eel can contain alga­e. This is why the common moray eel appears green, even though its skin is actually dark blue. Also, the scales of an eel are quite small compared to other fish.
In addition to its long snake like shape, scale size might be a reason why eels are so much more slippery to the touch than other fish. Removing the slime layer will kill the eel. Many commercial fishermen sprinkle salt on their caught eels in order to more quickly remove the slime and kill the fish. Also, eel blood is quite toxic. Although eel is a delicacy in many cultures, you should always cook it first in order to remove the toxic protein [source: Animal Planet].
************************
I remember when I was a girl my southern Italian family included eel as part of the Feast of the Seven Fishes on Christmas Eve. I was about 6 or 7 years old when my family coaxed me into eating a piece of eel that had been fried and served as part of the dinner.
I didn't want any of it and the thought of eating it made me gag, but my family insisted. I took a bite, chewed it, then promptly threw up on the table, spoiling everyone's dinner!
I've eaten eel as an adult in Japanese cuisine and Italian as well. It's delicious.  Tastes like chicken!
Eel recipes

I've never been around, seen, nor eaten an eel. I think I'm going to keep it that way. :)

Why is it that everything tastes like chicken, why not just eat chicken.

That's one way to get people off your back about eating stuff you don't like. That was me, only with broccoli.

Skudrunner - that was Bobcat Goldwaithe's main joke in his 80s standup routine. His other joke was the losing his job/losing his girlfriend bit. The rest of his routine was crazed screaming.😉