What are the gobshites* talking about?

Here's what they're talking about: 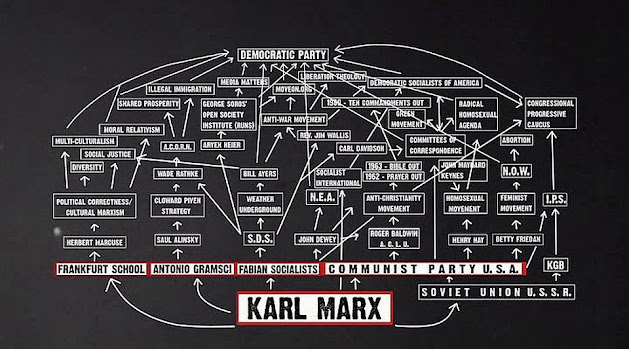 Yes, the folks who admire and support the guy who cried "I Love You! You're special." to the mobs that incited an insurrection against his own government; who incited armed mobs to "HANG PENCE!" his own vice president; who incited armed mobs to harm the Speaker of the House; and who sought to interfere with the certification of the electoral college votes and overturn a free and fair election -- THOSE FOLKS -- are promoting the false and conspiratorial idea that Democrats are Marxist?!

Now why do you suppose that they post absurd ideas like that instead of facing what they are and who they support?

We all saw with our eyes what happened on January 6th, yet the MAGAts pretend it was just a "A Tiny Bit of Rowdiness" that caused the deaths of seven people, including a Capitol policeman, and was the first attack on the United States Capitol since the War of 1812.

But Democrats are "Marxists?"

Jennifer Rubin:  "Americans should be deeply alarmed that the Republican Party still remains faithful to the instigator of that violence (who sent his “love” to the rioters during the attack). A political party that cannot repudiate the person who inspired insurrections and still brags about it (and to boot, spreads the lie that the insurrectionists were left-wing extremists) must be held accountable for their part in the normalization of these groups."
[skip]
"Republicans have tried to absolve themselves of blame for the rise in right-wing violence by noting that they have denounced violence. But they cannot escape responsibility for helping to spread the ideology underlying white supremacy or giving the ideology of extremist groups the patina of respectability. When they constantly propagate the notion that the United States is facing an existential threat from immigrants or that their followers’ way of life hangs in the balance, Republicans and their right-wing media mouthpieces cannot be surprised when some Americans take them seriously and spring into action"
The bloggers who promote the idea that Democrats are Marxists are no better than the thugs who wrongly attacked the United States. Why? Because they perpetuate Trump's Big Lie, promote conspiracies and anti-democracy narratives, and refuse to accept Joe Biden's overwhelming victory over Trump.
But more than that are Republican and right wing media lies: That the election was stolen, that honest journalism is fake news, and that Obama is a Muslim. -- the list goes on.
And the biggest lie, the true “Big Lie” that has been going on the longest, is that Democrats are evil; that they are socialists, godless, baby killers,  who want to make your kids gay and turn America into Venezuela.
Their mantra has always been that Democrats hate America, Democrats are Marxists; and if “you don’t fight like hell, you won’t have a country anymore.”These lies, all underpinned by the ubiquitous “Democrats are evil”, have had the inevitable affect. **
If you believe the lies then “Democrats” ARE evil, and those fighting Democrats, including those who violently stormed the capital, are the true patriots. This is why we must clearly see Republican lies for the threat they are, and clearly assign responsibility for the damage they cause.
A good start is to recognize their and Trump's statements that the election was stolen for what they are:  Acts of criminal sedition intended to overthrow our government.
Posted by Shaw Kenawe at 10:03 AM

If I've learned one thing in at my age, it's this!
When you elect an Idiot to be your President you should not be surprised to see him act like a Idiot.

Hope I'm wrong but I don't believe for a moment the present repukelian party has even close to the good sense and desire it would require to repudiate tRump and his anti American Trumpism. They created the political bast^^d and they own SOB.

Yes, Darth Bacon, and we're as thankful as you must be that Trump was defeated last November, and we now have a real POTUS in Joe Biden.

We certainly DID get rid of the idiot!

RN, There's no question that the present GQP owns Trump and all of his corruption.

They deserve whatever happens to what was once The Party of Lincoln.

Perhaps something good will come out of its ashes?

You can bet, even after calling ole Moscow Mitch a 'dumb son of a bitch', and hanging Pence out to dry, both of those morons will still hold King Clorox's water and defend every criminal, hideous thing he does. That's just how low the GOPQ has sunk, these days. No decent American would still be a Republiscumbag.

Agreed completely Bluebullamerica. No decent real American would still be a republiscumbag.

However, neither tRump and Trumpism or the GQP (aka Q-GOP) is going anywhere anytime soon. We're probably stuck with 30 to 40 million tRump cultists that will kiss his ring until the day ge croaks. Which for me can't come soon enough.

The one truth of Trump's first campaign was: you won't recognize the country when we are done.

The incompetency of the Trump administration reaches further than we'll probably ever know. We'll continue to find out that it was even worse than we thought. There's a lot of corruption to be rooted out. Trump deserves nothing less than a jail sentence.

Not surprised, Ms. Shaw. Lowlifes without a shred of originality often stoop to imitation. The right wing brain is damaged and, sadly, the best they can do is imitate others. Sort of like chimps copying what the visitors are doing while at the zoo. Except, of course, the chimps are far smarter and much more useful to society than are the GOPQ types.

Bluebullamerica, The impostor is probably an escapee from WYD blog that's been shut down for weeks. They've done this to RN, Dave Miller, Ray, and me and others who comment here.

I believe you're correct in that they have some sort of mental problem. Apparently they're having withdrawal anxiety since WYD has shut down. A number of them come here almost every day with some incoherent, illiterate comment hoping to get published. Really. They are deranged.

Shaw... what's odd is that even when he was frequently commenting, Ducky somehow escaped the fakers.