This woman was elected to Congress by Trumpublicans...

and they can't get enough of her. Here's a report on their "rising star" -- a rising star in the political party that values "Law and Order."  LOL! 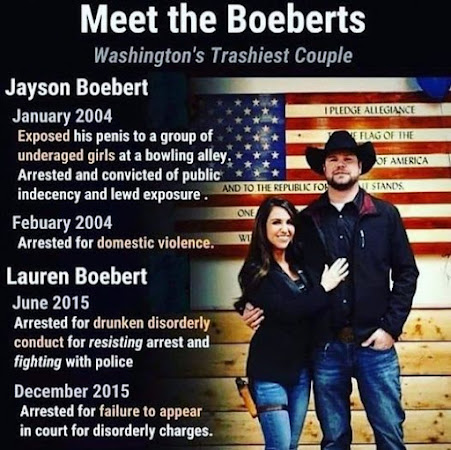 Here's just one report on her record:
"Boebert was arrested twice in Mesa County in 2015. As first reported by Colorado Newsline, Boebert was detained on June 20, 2015, after a verbal altercation with police at Country Jam, a music festival near Grand Junction. Boebert, then 28 years old, allegedly shouted at people detained on suspicion of underage drinking, urging them to flee from police, which caused the young drinkers to become unruly. While she was being handcuffed for disorderly conduct, Boebert tried to twist away from police, according to deputies’ reports. She allegedly shouted that her arrest was unconstitutional, that “she had friends at Fox News and that the arrest would be national news.”
It did not become national news.
Rotten behavior and arrests run in the Boebert family:
Lauren Boebert’s husband did jail time for "lewd exposure" in a bowling alley. She was there Couple were 86'd from Colorado bowling alley in 2004 after Jayson Boebert exposed himself to two young women
Just recently Boebert called a fellow member of Congress a "terrorist."
Rep. Lauren Boebert suggested Rep. Ilhan Omar was terrorist in anti-Muslim remarks at event
"Boebert implied Omar had been mistaken for a terrorist in an elevator on Capitol Hill.
"So the other night on the House floor was not my first jihad squad moment," Boebert told a crowd. "I was getting into an elevator with one of my staffers and he and I were leaving the Capitol, we're going back to my office and we get in the elevator and I see a Capitol Police officer running hurriedly to the elevator. I see fret all over his face. And he's reaching.
The door is shutting. I can't open it." "What's happening? I look to my left and there she is, Ilhan Omar, and I said, 'Well she doesn't have a backpack, we should be fine,'"
Boebert continued. "So we only had one floor to go and I say, do I say it or do I not? And I look over and I say, 'Look, the jihad squad decided to show up for work today.' Don't worry, it's just her staffers on Twitter that talk for her. She's not tough in person."
Let the record show that Ilhan Omar has never been arrested for disorderly conduct or resisting arrest. Lauren Boebert has.
Two years ago, Ilhan Omar was challenged for her seat in the House by this Trumpublican:
Pro-Trump Republican aiming to unseat Ilhan Omar charged with felony theft
Exclusive: Danielle Stella, reported to support baseless QAnon conspiracy theory, held twice this year over alleged shoplifting
And here's Boebert's inane comment on Transportation Secretary Buttigeig's infant son:
"Rep. Lauren Boebert silent on criticism after she said Pete Buttigieg was trying to 'chest feed' at same event she implied Rep. Ilhan Omar was a terrorist."
The pride of the Trumpublican Party: Lauren Boebert. If she were any stupider, she'd have to be watered once a week.
The Trumpublican Party used to be the Republican Party, a party that was supposed to stand for law and order, family values, and fiscal responsibility. They abandoned all of those ideals in service to a Liar, a Cheat, and a Fraud: Donald Trump.
Lauren Boebert and her ilk are examples of how degenerate, degraded, and dissolute the Party of Lincoln has become.
Posted by Shaw Kenawe at 6:00 AM

Have you ever been to Rifle, CO? My wife, son and I went through that area one year on a camping trip. As we turned into Rifle Gap State Park, my wife, seeing some of the people started to get chills and said we should leave. Think Cletus the Slack jawed Yokel from the Simpsons. Drunk. With Guns. And Hatchets.

The one and only time we've not felt safe in a state park in the west.

My Spidey senses have been on alert for anyone from that area for years. Boebert seems to perfectly represent her people.

Sure. But the've got to be educated, honest, hardworking, good people with no criminal record interested in learning how to legislate, not just driving a social media presence. Nobody with any sense would hire a citizen with no experience to be his or her lawyer in a death penalty case. Why hire a hack to be your representative?

Your last line says it all.

I don't get the point of posting the Abbott tweet. It's common that people from other parts of the world travel to Mexico and try to cross the border into the US from there. Substantial numbers of people from the Middle East have been caught trying to cross the US-Mexico border, for example. So it wouldn't be particularly surprising if a few South Africans were doing the same. The tweet doesn't imply that Abbott thinks South Africa borders on the US or got South Africa confused with South America or anything like that.

The American voter at work.

These white trash bigots have an inflated sense of both entitlement and victimhood.

They hate people not like them, call them commies, and will punish the "others" in any way they can when they seize minority rule again.

I have no doubt that millions of ignorant white bigots would start shooting Blacks and Democrats if ordered to do so by Trump and his Cartel. They have already been indoctrinated to see the press and and the rest of us as enemies.


They will, and do, project their "fascists" and "racists" accusations, because racism isn't racism to racists, ignorance isn't ignorance to the ignorant, and a cult isn't a cult to a cult.

The whole lot of the Trump wing of the GQP are disgusting, vile, evil know-nothings who must be exposed constantly for their anti-American ways.

Boebert seems more interested in theatrics and keeping her name in the news than in legislating or helping her district. She's very much like the Former Guy, a narcissist.

Lauren Boebert is what George W. Bush called the ‘worst of humankind’

As we think about the current Not So GOP, the words of Fmr President Bush, whose policies I mostly disliked, but who on occasion, got somethings right...

“Those who feel like they can intimidate our fellow citizens to take out their anger, represent the worst of humankind, and they should be ashamed of that kind of behavior.”

The worst part of humankind... that about sums up the Boebert/MTG/Gosar/Cawthorne and all the rest wing of a once valuable US political party.

Interesting how Lauren Boebert can falsely call Congresswoman Omar a terrorist who consorts with criminals when Boebert actually has a criminal mugshot and played a large role in the January 6 attack on the Capitol.

It’s as if racism lets her escape any consequences and scrutiny.

Paula, It's rampant projecting. They always accuse others of what they are.


Dave, See my new post and what the Auschwitz Memorial said about another GQP mouthpiece on FAUX NOOZ.

"On Monday, Colorado Rep. Lauren Boebert (R) called Minnesota Rep. Ilhan Omar (D) to, ostensibly, apologize for suggesting that simply because Omar is a Muslim, she is a potential terrorist.

The call, um, did not go well. After Omar demanded that Boebert apologize publicly and Boebert refused, the Democrat hung up on the Republican.

At which point, Boebert took to social media (of course!) to make clear she wasn't actually sorry.

"I will fearlessly continue to put America first, never sympathizing with terrorists," Boebert said in the post. "Unfortunately Ilhan can't say the same thing and our country is worse off for it."

Then came new reporting Tuesday from CNN's KFile on a speech Boebert gave in September in which she suggested that Omar was a terrorist in addition to being "black-hearted" and "evil."

Add it up and you get this: Not only is Boebert not sorry for what she said about Omar but she actually believes it. This wasn't some slip of the tongue for Boebert; it was a real belief.

All of which raises a simple question: What are House Republicans going to do about it?" --Chris Cillizza

Nothing, and I mean NOTHING! can be compared with the sadistic, brutal, diabolical, and catastrophic treatment of Jews and minorities during the Holocaust. NOTHING.

That said, one can see some similarities in the thuggish behavior of white supremacists and some Trumpublican members of Congress and the Brown/Black Shirts of Germany's and Italy's fascists. Charlottesville comes to mind as well as the January 6 insurrection against the United States' Capitol to disrupt the Constitutionally required certification of the electoral college vote, and a sitting president's refusal to accept the will of the people and who continues to promote the Big Lie that the election was stolen.

I'd never seen this in my lifetime nor could I have ever imagined this would happen in America.

Sometimes we have to look to history to warn us of what unchecked nationalism can do to a country. We Americans are just as vulnerable as any other humans on this planet to a form of nationalism that often leads to conflict with others, infringes on rights of others, and creates xenophobia — the fear that someone will take them over.

Remember Charlottesville: "Jews will not replace us!" And Trump's assertion that there were "Very fine people on both sides."

And Trump DID say that during a presser when a reporter questioned him about it. Later, at another presser, he qualified that statement, probably because his handlers told him he had to. Here's what Trump actually said and then qualified his first remarks:

"Following the 2017 white nationalist rally in Charlottesville, Trump did say that there were "very fine people on both sides," when speaking about those who attended the rally in support, and those who demonstrated against it.

But the meme misrepresents Trump's statements, because HE DID NOT SAY DIRECTLY, "There were very fine people on both sides, & I'm not talking about the Neo-nazis and white supremacists because they should be condemned totally."

The two statements were separate, the second part coming later, after further questioning from reporters."

I've explained how wrong you are, but you can have your Hitler fantasies. They aren't remotely comparable to what happened in Nazi Germany. One thing that is similar to what Hitler did is the constant fear mongering and hate directed towards the enemy (Jews or in this case Republicans). Build the hate so you can get away with treating them anyway you want. We know what Hitler did to the Jews, what do you want to do to the republicans?

Actually the otherism, hate, greed, and ignorance eests squarely on the shoulders of tRump and what is now the Trumpublican Party of lies, sedition, and insurrection.

So, jerry, live your dreams and delusions. You deserve them.

I'd like to put Trump in jail, but none of the accusations you spout have been proven. Maybe they will be, but the investigation is still on going. It's nice to know you want to skip the rule of law and processes of justice to satisfy your blood lust.