JOSEPH STIGLITZ TELLS US HOW THE FINANCIAL MELT-DOWN HAPPENED 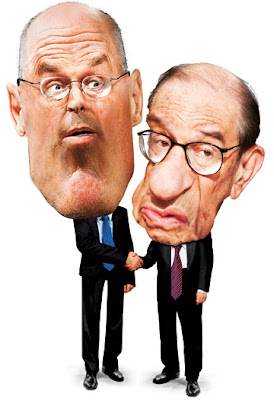 Behind the debate over remaking U.S. financial policy will be a debate over who’s to blame. It’s crucial to get the history right, writes a Nobel-laureate economist, identifying five key mistakes—under Reagan, Clinton, and Bush II—and one national delusion.

There will come a moment when the most urgent threats posed by the credit crisis have eased and the larger task before us will be to chart a direction for the economic steps ahead. This will be a dangerous moment. Behind the debates over future policy is a debate over history—a debate over the causes of our current situation. The battle for the past will determine the battle for the present. So it’s crucial to get the history straight.

What were the critical decisions that led to the crisis? Mistakes were made at every fork in the road—we had what engineers call a “system failure,” when not a single decision but a cascade of decisions produce a tragic result. Let’s look at five key moments.

No. 1: Firing the Chairman

In 1987 the Reagan administration decided to remove Paul Volcker as chairman of the Federal Reserve Board and appoint Alan Greenspan in his place. Volcker had done what central bankers are supposed to do. On his watch, inflation had been brought down from more than 11 percent to under 4 percent. In the world of central banking, that should have earned him a grade of A+++ and assured his re-appointment. But Volcker also understood that financial markets need to be regulated. Reagan wanted someone who did not believe any such thing, and he found him in a devotee of the objectivist philosopher and free-market zealot Ayn Rand.

Greenspan played a double role. The Fed controls the money spigot, and in the early years of this decade, he turned it on full force. But the Fed is also a regulator. If you appoint an anti-regulator as your enforcer, you know what kind of enforcement you’ll get. A flood of liquidity combined with the failed levees of regulation proved disasterous.

Greenspan presided over not one but two financial bubbles. After the high-tech bubble popped, in 2000–2001, he helped inflate the housing bubble. The first responsibility of a central bank should be to maintain the stability of the financial system. If banks lend on the basis of artificially high asset prices, the result can be a meltdown—as we are seeing now, and as Greenspan should have known. He had many of the tools he needed to cope with the situation. To deal with the high-tech bubble, he could have increased margin requirements (the amount of cash people need to put down to buy stock). To deflate the housing bubble, he could have curbed predatory lending to low-income households and prohibited other insidious practices (the no-documentation—or “liar”—loans, the interest-only loans, and so on). This would have gone a long way toward protecting us. If he didn’t have the tools, he could have gone to Congress and asked for them.

Of course, the current problems with our financial system are not solely the result of bad lending. The banks have made mega-bets with one another through complicated instruments such as derivatives, credit-default swaps, and so forth. With these, one party pays another if certain events happen—for instance, if Bear Stearns goes bankrupt, or if the dollar soars. These instruments were originally created to help manage risk—but they can also be used to gamble. Thus, if you felt confident that the dollar was going to fall, you could make a big bet accordingly, and if the dollar indeed fell, your profits would soar. The problem is that, with this complicated intertwining of bets of great magnitude, no one could be sure of the financial position of anyone else—or even of one’s own position. Not surprisingly, the credit markets froze.

Here too Greenspan played a role. When I was chairman of the Council of Economic Advisers, during the Clinton administration, I served on a committee of all the major federal financial regulators, a group that included Greenspan and Treasury Secretary Robert Rubin. Even then, it was clear that derivatives posed a danger. We didn’t put it as memorably as Warren Buffett—who saw derivatives as “financial weapons of mass destruction”—but we took his point. And yet, for all the risk, the deregulators in charge of the financial system—at the Fed, at the Securities and Exchange Commission, and elsewhere—decided to do nothing, worried that any action might interfere with “innovation” in the financial system. But innovation, like “change,” has no inherent value. It can be bad (the “liar” loans are a good example) as well as good.

"under Reagan, Clinton, and Bush II"

Amazed that it leapfrogged Bush I.

But he caused enough damage by breaking his "no new taxes" pledge.

I find no fault with any of this analysis, except....

In his analysis, Joseph started in the 80's. There's 50 years of government entanglement prior that set up the conditions that led to the mistakes of the past 20 years.

And we seem to be making the same mistakes again.

Patrick, what were those mistakes that by your time line, were probably made in the FDR Admin?

Was it responsible gov't involvement and regulation?

The elimination of that regulation, and the blurring of walls between institutions are, according to the author, prime reasons for the meltdown.

By virtue of the facts that the removal of gov't regulation was one of the triggers of this mess, the GOP cannot responsibly continue to call for self regulation of markets.

Even Greenspan said he was wrong about that.

Have we heard anyone else in the GOP call for an end to self regulation? I do not think so because they are too wedded to idealogy on this issue.

There is also a great Jim Rogers article on American banks available from Rueters that is an excellent addition to this article.

"the GOP cannot responsibly continue to call for self regulation of markets."

It was the policies of two government agencies, Fannie-Mae and Freddie-Mac, that caused so much of this problem. Policies instituted by Democrats, who blocked GOP efforts to reign them in. Can you imagine how much of a mess we'd been in if they had chosen not to take on the sub-prime mortgages? A lot less of one.

To answer your question, Dave, it's the mentality that government is the solution to the myriad problems of free market capitalism. That was the legacy of the New Deal, government worming its way into every part of society.

Now, instead of a wholly hands off approach, we're in the same situation we were 80 years ago, except the government is so tied into everything....

At most, government's role is to act as a regulator and prevent the excesses (good and bad) that are produced, not to keep changing out the regulations to keep the markets artificially spiking for decades.

Obviously dmarks, you did not read the articles.