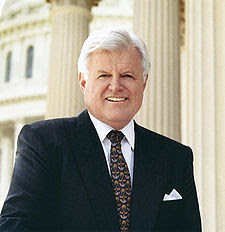 I'm well aware of how those on the right feel about our Senior Senator from Massachusetts, Ted Kennedy. I've listened to their pathelogical hatred of this man for years as they continue to bring up his past transgressions. These are the same people who call themselves "religious."

Whether they're Christian or not, they have this in common: They do not forgive and will not forget what happened in 1969.

They have no knowledge of how Senator Kennedy reconciled this awful tragedy with his god--and they certainly don't believe in redemtion and the power of good works as penance for past wrongful behavior. This attitude is in direct contradiction to the teachings of their Personal Savior, Jesus Christ. This spiteful, vindictive posture toward Senator Kennedy says more about them and their galloping hypocrisy and anti-Christian behavior than it does Senator Kennedy.

I salute Senator Kennedy and wish that more people had the courage, humility, and forebearance that he has shown over the years.

James Carroll of the Boston Globe writes this about the unique award Harvard University recently conferred on Senator Kennedy:

HARVARD UNIVERSITY almost never grants honorary degrees outside the spring commencement ceremony. Rare exceptions have included George Washington, Winston Churchill, and Nelson Mandela. Today, such figures will be joined by Senator Edward M. Kennedy of Massachusetts, as he receives an honorary degree at a special Harvard convocation. An unadorned litany of Kennedy's achievements shows exactly why this honor is fitting, and why he belongs in such historic company.

An early champion of civil rights, Kennedy made his first mark by opening America's door with the Immigration Act of 1965, to which the Globe's Peter S. Canellos points as legislation that made this the multi-racial nation that could elect Barack Obama. Kennedy quickly emerged as a leading voice against the Vietnam War, which sealed his skepticism toward military adventures. His support of the desegregation of Boston Public Schools in the contentious 1970s made him controversial among his own core constituents. His back-channel contacts with leaders of the Soviet Union helped lay groundwork for détente and arms control, on which he became one of the Senate's leading voices.

When the conservative tide rolled in with Ronald Reagan, Kennedy came into his own as a new kind of opposition leader - a firmly liberal but supremely pragmatic legislator. He turned back Republican assaults on Social Security, legal aid, and voting rights. Prophetic critic of the "jellybean economics" that play out to this day; denouncer of "catsup-is-a-vegetable" stinginess ("The poor may be out of political fashion, but they are not without human needs"); first supporter of the nuclear freeze movement; wily obstacle in the path of the Reagan wars in Central America; leader of the sanctions movement against apartheid South Africa; derailer-in-chief of the Bork Supreme Court nomination; rare dissenter to what he called "the feel-good invasion" of Panama; clear-eyed critic of the first Gulf War, warning of consequences that, in fact, followed - again and again, history proved a lonely Kennedy to have been right.

The rest of the article is here.
Posted by Shaw Kenawe at 9:51 AM

Shaw, I personally agree with you on the issue of Christianity and Kennedy.

But here is what I have learned over the years as a Christian myself, and one who continually falls short of the mark.

People believe that Kennedy privately covered up a very public sin and they want public acknowledgment, contrition, shame, and humiliation from him on this issue. Something like the Jimmy Swaggert "I have sinned" admission.

Now you and I can probably agree that even that type of admission will not stop the hate and vile that people who profess to love Jesus and say they model their lives after Him will continue to heap on Kennedy.

That is just where folks are. I am sure Sen. Ted has made his peace with God, and if not, that'll be to his detriment one day.

Our job is, or at least should be, as Christians, to unconditionally love people where they are at, warts/sins and all. It is what Jesus did for us.

To be fair, the liberal left has some problems here as well. While not claiming any religious bent per se, they continue to preach tolerance while acting intolerant themselves, much like the right does towards Kennedy.

It does smack of a double standard.

I’m not sure I understand what you mean by “While not claiming any religious bent per se, they [the liberal left]…”

But while the Left may espouse not one religion over another, they do embrace a set of independent values, which are reflected in their political positions, i.e., fairness in minimum wage, aid to those less fortunate, fairness in immigration, civil rights, etc. This approach is consistent with the Constitution, which forbids the establishment of a national religion. Liberals are Catholics, Protestants, Jews, Muslims, Hindus, etc., and Atheists. I am glad that the Left doesn’t prefer one religion over another, or none at all.

As to your remark about the Left having a double standard in tolerance, it is, of course, correct. And I assume you’re referring to the Bush Derangement Syndrome.

But may I also gently point out that whereas Senator Kennedy was responsible for one tragic death, George W. Bush, by pursuing his Bush Doctrine of Pre-emptive War, has been responsible for many thousands of deaths.

Shaw, when I mention the faith of liberals in this sense, I was talking about 2 things.

1. The GOP, faithwise is overwhelmingly Christian, while the left is of course, more pluralistic.

Yes, I was speaking of the whole I hate Bush crowd, but it goes much deeper than that.

For example, how does the "we need to be tolerant" crowd deal with people are not supportive of gay marriage?

Now I am not talking about the idiots out there, like the Topeka pastor and their ilk, I am talking about generally reasonable people who just disagree.

Or perhaps those that hold a principled position against abortion.

Mind you, none of this excuses the behavior of the conservatives against Kennedy, or the liberal side, it is just to say that, like most issues, while we can certainly point fingers in the direction of conservatives, liberals are guilty also.

Perhaps you know, did Sen. Ted vote for the "war" authorization?

LOL! Anyone saying that and who thinks he/she represents "The Left," is definitely not reality based. Of course the Left has more than its share of liars, cheaters, and immoral miscreants.
Those who say otherwise, I would consider fringe or fanatics.

For example, how does the "we need to be tolerant" crowd deal with people are not supportive of gay marriage? --Dave Miller

Well, intolerance toward gays and gay marriage is based on religious beliefs, and religious beliefs do not trump the civil rights of others. I can understand how people would be angry and impatient with people who decide that a group of people should be discriminated against because of someone's religion. Remember how religion was used to prevent interracial marriage? And to keep slavery in the South? Years from now we will come to see how wrong it is to deny our gay brothers and sisters basic civil rights.

As for a principled stand on abortion, that is fair and one's opinion should be tolerated, but the opinion shouldn't trump the law of the land. There is not one liberal that I personally know who would ever, ever force anyone to have an abortion, but I do know of well-meaning Christians and other religions who would force someone to have a child, regardless of the circumstances make that choice a very bad, even dangerous one.

There definitely IS intolerance on both sides, that is true.

And Sen. Kennedy voted against going to war in Iraq. He was a very strong opponent of the war.

"..and religious beliefs do not trump the civil rights of others."
But that incipient intolerance may well be why 78% of Jewish Americans voted for Obama.....

I realize this may sound odd coming from a "religious" person like myself, but I am of course, with you guys on this thread.

Regarding gay marriage, I must say the personally, it ain't for me. But you know what, if Bill and John want to marry, or even Gina and Susan, that will never devalue my marriage to Michele.

Our relationship is not dependent on others.

Shaw, I also believe that years from now, gays will have almost full acceptance in the church based on the same thinking we have seen in areas like interracial marriage, slavery, and women in ministry roles.

Has Kennedy apologized and owned up to killing that girl? I was not aware that he had, but there might be something I don't know about

@bb: "But that incipient intolerance may well be why 78% of Jewish Americans voted for Obama....."

How is that evidence of intolerance?

The only people who have an interest in that question are the parents of Mary Jo Kopeckne.

I don't know, but I'm guessing he would have apologized.

It's so long ago that if he had not avoided justice for the manslaughter, he'd be out of prison by now. Regardless of his politics, he's got a tough fight now.

"There is not one liberal that I personally know who would ever, ever force anyone to have an abortion, but I do know of well-meaning Christians and other religions who would force someone to have a child, regardless of the circumstances make that choice a very bad, even dangerous one."

In every instance where abortion occurs, it is forced on the child.

As for "forcing someone to have a child", the child already exists (in the question of abortion). The greatest force being discussed is act of killing that child.

I know some Christians who are very pro-abortion, and some Atheists even who are against it. So it is really not a religious issue, when you get right down to it.

There are more cells in a clipping from my tonail than there are in a zygote. Look it up.

Religion says that the zygote has a "soul" at the moment of conception. Science doesn't.

Abortion is always a difficult decision, but so long as people can justify wars where pregnant women and LIVE babies are mutilated and killed, then those same people will have to live with the fact that people will make stupid mistakes when they have unprotected sex, and that these same people should not be forced to carry those mistakes to full term. And YES an unwanted pregnancy is a mistake.

A group of cells is NOT a "child."