WHITE HOUSE SAYS "NO ROOM" TO OBAMAS' REQUEST TO MOVE TO BLAIR HOUSE (Is there no inn for them to room?) 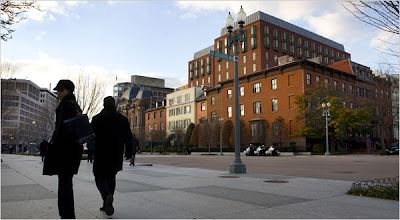 It's the Christmas season, and incredibly, we're hearing the news story of a family being turned away from, well not exactly an inn, but a House. And it's the next First Family of the United States of America that is being told "there is no room."

The Obamas hoped to enroll their daughters at the Sidwell School after the Christmas break on January 5th, and inquired if Blair House would be available to them for this special request. According to the WH, Blair House is traditionally made available to the incoming President-elect and family 5 days before the inauguration, which would make that January 15.

White House officials declined to disclose specifically who is using Blair House during that period, for what purpose or how they could take precedence over the president-elect of the United States when it came to government housing; one White House official would say only that it had been booked for “receptions and gatherings” by members of the departing Bush administration. Those receptions, the official said, “don’t make it suitable for full-time occupancy by the Obamas yet.”

So the Obamas are now looking for an alternative place to stay for a few weeks, though they presumably are not searching Craigslist for a sublet.

A pretty good place. I hope Obama changes his mind on an issue he is very wrong on, and comes to support vouchers, so poor families have a chance for a superior education for their children like the President-Elect has for his daughters.

he grins as he asks, "is michelle pregnant and about ready to give birth again, shaw, thus in need of shelter?"

have to admit that would be something to brag about as a person was growing up, that he was born in the Blair House.

Is there no inn for them to room?

Oh well, I guess there's always the parking garage of Blair House. Chuck some straw down there, have the ASPCA drop off some rescued aminals, and I'm sure there's a searchlight that can put a bright enough light into the sky. If not, I'm sure we could get an alien spacecraft up there to twinkle appropriately.

And Griper, Michelle doesn't have to squeeze out the messiah. She already married him.

Well the Obama's will ride into Washington DC thanks to a "donkey."

This made a perfect Christmas story.

Next thing you know that uppity President-elect will want to see the public records the occupied WH is trying to keep from letting out of their private hands and secrete in Dallas at their breeding ground for destructive personnel, policy and behavior.

Ruth: Thanks for the wet blanket on something that was getting funny.

have to admit that this post was one to have fun with. nice twist to the Christmas story, shaw. you did a good job with it. :)

Ruth; The White House is always occupied (?). I've not known it to be vacant in ages.

Ruth: Come to think of it, your references to "occupied White House" remind me of the neo-Nazi's reference to the US as "zionist occupied government (ZOG)". This connection is driven home by your comment in another post downplaying the seriousness of a supposed "charity" really being fundraising front for terrorists.

Thankfully, we have elected a President who believes the Israelis have a right to exist, and he will not give "Balance" or "equivalency" to the Palestinian cause, which remains today one of promoting extermination of their enemies.