Hat tip to Billions of Versions of Normal: 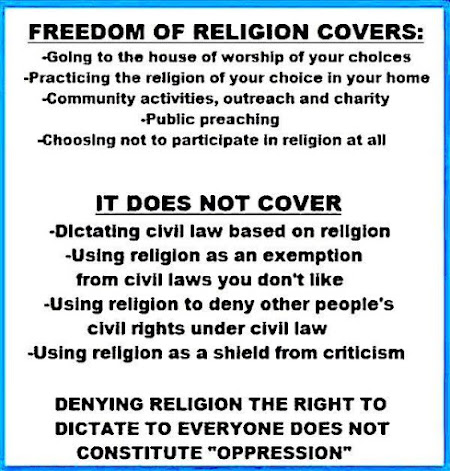 Generally,religion has been used to control peoples thoughts and behaviors. Through various methods religions have controlled cultural belief systems throughout history. Much evil has resulted due to the religions and the hypocrisy they've supported and practiced...

It's very true religion has done some bad stuff over the years. But the whole reason it's here is that it was a refuge for the poor people from the aristocrats just like unions are for the workers. But like we all find out, power goes to people's heads, and the saviors of the people become as bad as the powerful they were fighting against.

More people have been killed in the name of religion than all the war's. Just shows ho you can control people by playing to their fears.

Sharia Law is as religious as Torah and what we are seeing as from many of the mostly nominal Christians claiming some sort of religious freedom exemption from whatever.

I've yet to see any of these so called Christians, and this is admittedly, my tribe, stand up and argue for the same power of religious exemption for Muslims or believers of any other faiths.

I've never been a fan of organized religion, personally. Personal faith in whatever is fine, but once it gets organized it becomes a mafia like creation that demands strict adherence to arbitrary rules that frankly make no sense and are often contradictory. Now that I'm facing my own end here soon, though, I revisited my ideas about religion with the hope of coming away with some deep, keen and clear cut understanding of our universe. Sadly, all I got was a headache and even more mistrust of organized religion. Oh well, I'll see when I get there . . . or I won't. Either way, there's nothing I can do about it.

It's nice to see people pulling away from religion, unfortunately, they have replaced that cult with other cults like trumpism. People just seem to want to believe what is not believable.

20th Century theologian Paul Tillich defined religion and faith as "the state of being ultimately concerned".

This has frequently been taught in seminaries and universities as "that which you hold so deep that you will die to defend."

If you understand that Tillich grew up in Nazi Germany, you begin to understand it.

I would define Trumpism for many as their religion.

So often religion is used as a label to say "I'm right". (So does "patriot"). This works even when the person's values are completely different from the source values of that religion.

OT: speaking of idiots, this woman thinks Biden is in Congress:

I hate name calling…but what the heck!
NEXT TO BIDEN, WHO DO YOU THINK IS THE BIGGEST IDIOT IN ALL OF CONGRESS?


She's a Trump worshipper and the stupid is strong in this one.