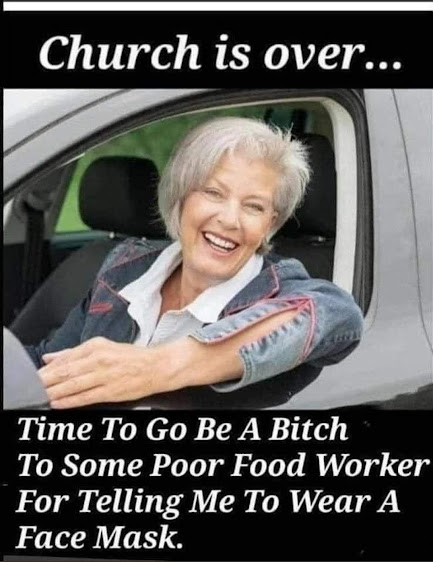 That's certainly not the meanest, or most hypocritical thing religious people do.

Love it! Karen's are really just a symptom though of how far our people have fallen into the lies and anti Americanism of the right wing. Youtube has hundreds of 'Karen' videos worth watching, imo.
Hope everyone got through the storm okay. Luckily, it didn't get quite as cold here as they had warned it might, so perhaps my orchids lived. Time will tell.

The right has it's myriad issues.

The left however is not free of obscuration or delusion.

With both parties brass continuing to embrace western dualism and idolize self interest above all, what's the likelihood anything with change?

We are probably at an existential moment in history. A betting man would probably bet NEITHER the cons nor the libs will choose the path the planet and all sentient beings would benefit from.

Self interest, greed, or ignorance always seem to throw up a barrier. Especially so over the last 34 years.

It also gets the bulk of its "hot" fuel from the cons.

I agree with you Anonymous. The left is not free of the scourge of misinformation and political calculation. However, when I list what each side has actively done or tried to do legislatively, I cannot help but throw my full support to the left. After all, the Founding Fathers were wild liberals of their time, as was Jesus. Feeding the sick, the hungry, living with and empowering people considered to be of low morals. The right would have set up layers of businesses to take products or funds before it ever got to the sick or the hungry. They are still fighting against people's basic right to healthcare, after all.
But, on the whole, I agree there is more that can be done on both sides. It's just that the sides are no where near equal in that, imo.

I also agree w/you BluebullAmerica. Which is why I gave up on the party of misinformation and greed 22 years ago.

My concern, which won't buy a coffee, is that dems need to step it up several notches and UNIFY as they attack trumublicans like mad pit bulls. While at the same remaining true to the ethical and moral principles this nation was allededly founded on.

Frankly Bluebull I wish this nation had the integrity the American Indian Nations and the Nation of Tibet had (have). If my life companion passes before me I may leave here for the mountains of what's left of the land area that once was Tibet.

I also left in 2000, when it became obvious that they had stolen the election from Gore (and I didn't even vote for Gore). Plus, Dumbya had been my gov. for several years and it was obvious that he was a moron and I just couldn't vote for that idiot and couldn't believe my party would back such a foolish human PEZ dispenser.
Peace be your constant companion, friend.