REMEMBER WHEN THE GOP AND ITS QUEEN, SARAH PALIN, BELLOWED "DRILL, BABY, DRILL!?"

SARAH PALIN:  "The chant is "drill, baby, drill." And that's what we hear all across this country in our rallies because people are so hungry for those domestic sources of energy to be tapped into. They know that even in my own energy-producing state we have billions of barrels of oil and hundreds of trillions of cubic feet of clean, green natural gas. And we're building a nearly $40 billion natural gas pipeline which is North America's largest and most you expensive infrastructure project ever to flow those sources of energy into hungry markets.

Barack Obama and Senator O'Biden, you've said no to everything in trying to find a domestic solution to the energy crisis that we're in. You even called drilling -- safe, environmentally-friendly drilling offshore -- as raping the outer continental shelf." 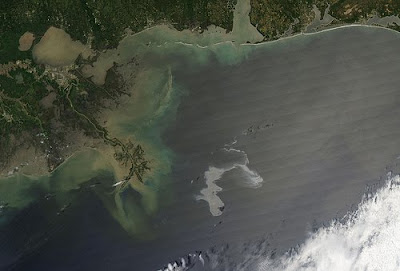 Officials are now reporting that this spill will be worse than then Exxon-Valdez.
Posted by Shaw Kenawe at 4:33 PM

Lest we forget, Mr. Steele was also part of this chorus.

I can't recall, have they had anything to say about this lately?

Bill Kristol is still out there claiming that offshore drilling is totally safe, except when it isn't.

I wonder what bone-headed comment Palin will eventually come up with now.

First the West Virginia mine disaster, now this. We need to get away from fossil fuels anyway because of greenhouse-gas emissions, but the fact is, they're too dangerous.

I regularly take the pulse of a few, select right-wing blogs and conspicuous by it's absence is any mention of the spill.

Go figger. They must chalk it up as just more leftist propaganda.

Infidel said: "First the West Virginia mine disaster, now this. We need to get away from fossil fuels anyway because of greenhouse-gas emissions, but the fact is, they're too dangerous."

Well, at least now we are getting the Nantucket-area wind farm, over objections from the main political opposition... which happens to be from the left.

Arthur: It's worth mentioning, for sure. Even if in some way.

Well the project is going forward. Personally I find the objections to wind projects problematic. And the folks on Nantucket fall into the nimby crowd for sure.

Not really. Folks on Nantucket are there due to the fruits of their 'labors' in the vineyards of capitalism. Lots of rich people. Not so many leftists.

Don't worry about the right staying silent. These lying jive turkeys have their story figured out now. They're trying to blame Obama and call the spill "Obama's Katrina."

Can't wait till Monday to hear what the right wing liars club of Limbaugh, Beck and the rest comeup with.

Haliburton 'capped' the well which somehow has come uncapped under contract to BP.

The Cheney kleptocracy is the gift that keeps on giving. The sun never sets on the incompetence, corruption and greed of our glorious 'free marketers'.

I love it when the righties blame it on Obama and criticize him for being slow to react! They conveniently forget Katrina, Bush's 8 day absence, the warnings he had ignored from the U.S. Army Corps of Engineers about the potential for just such a disaster. They forget that Bush didn't even go to Texas City or Alaska when they had oil spills. Instead he called for a relaxation of environmental restrictions.

Arthur said: "Not really. Folks on Nantucket are there due to the fruits of their 'labors' in the vineyards of capitalism. Lots of rich people. Not so many leftists."

There's nothing contradictory there. Last time I checked (a year or two ago) the two richest men in America were on the left.

The two richest men in America are dead in the middle of the political spectrum. Like the President.

Everybody is on the left in dmarks world...

Dmarks, is there anyone you consider more conservative than yourself?

Oh, 'septn oiled shrimp. Dey's lots a oiled shrimp naow. Why jest thother day, Ah had a maun in a fancy suit saying somebody called "BP" (Ah guass that's kinda like JR, or QB er someone lak thaut) did the world one a them favers by creatin oiled shrimp.

If you get full o shrimp, ya cin put it on a skewer (ya know, that's one a them sticks sharpened to stick inta the srhimp)and light it with a match'n ya don't evin nade a flashlight.

Naow thet's what I call versatiiile, Forrest. Jest think a all them batteries that won't be pollutin the dumps anymore.

I'm gonna hev ta git me a new net thugh, they just slide right through the on a got now.

Behold the typical democrat….no substance, just name calling…and too stupid to even realize that sarah palin is not our president.. so why continue to bitch about her?
This is why Barack Obama got elected…his voters have the I.Q. of a rock!

The mainstream media was dealt a devastating blow yesterday.
The Oil Spill was NOT Bush's faulf and it was not Sarah Palin's fault either.
Just like the Christmas Day panty bomber amd the NY car bomber, it was on Obama's watch!
When we have a man in the White House who believes his radical ideology is more important than the country he serves. 3000 people were killed by illegal immigrants to this nation last year. How many were killed by the "dangerous right wing tea party attendees?
And all YOU can write about is Sarah Palin. How sad you idiots are and the saddest part is that you don't even knmow it.
Obama is ruining america and you complain about sarah palin!

Hey Retinoff: speaking of idiots, what happened to your gmail account? You can't blame Obama on that, though you'd probably like to.

Are you saying that Shaw cannot bitch about Palin because Palin is not the president? I don't think even Beck would make such an illogical argument but bravo to you!

That Retinoff is certainly a breath of fresh air. What a well thought out post.

Keep up the good work!

The 'radical ideology' is always the give away. Obama is as 'radical' as Dick Nixon. Or Mitt Romney for that matter.

Still he's infinitely more humane than either of those hacks and I think he's onto some good things. Could be much better.

Indeed he could be 'radical'.

That would be fine.


IT is a truth universally acknowledged, that a wingnut who needs to constantly defend Palin from criticism, must be in want of an intellect.

IT is also a truth universally known that voters who had graduate or higher degrees overwhelmingly voted for Obama and those voters with high school or less education went overwhelmingly for McCain and Palin.

So your defense of the half-term governor who quit her job tells us a lot about you.

Thanks for stopping by and exposing yourself to us.

Here are the facts:


It really is typical of a wingnut to come here to defend the multi-millionaire governor who quit and do so by making stuff up.

Or it may be that this troll just didn't have the smarts to look up the information.

There is a systemic problem. Private financing of political campaigns corrupts the political and legislative process. If we had public financing of campaigns, we would have gotten a sustainable energy policy and Medicare for all decades ago.

And government funding corrupts it even more, by wasting taxpayer dollars in an effort to have government completely control who gets into it.

If we we had government funding of campaigns, we would not have democracy anymore, but something more akin to the old USSR where the Politburo chose who got onto it.

Let Pat Buchanan and the other candidates raise their own money. They are entitled to their own political speech, but not to rob us in order to pay for it.