WARNING: To Those Who Continue to Hope for Mr. Obama's Failure, Don't Look at This Chart...

it will make your heads explode.  For the rest of us, it is definitely good news.  We still have to do better, but we need to acknowledge the encouraging trend.

The highest increase in manufacturing jobs since 1998!

John Boehner was not happy with the new jobs numbers.  He, along with other GOPers, is po'd because Americans are finding jobs, which will make it harder for the Republicans to run against Democrats.  It's all about winning elections for them, and screw the working people.  Boehner and his compatriots would rather see more Americans out of work than in jobs--that would be much better for them.

Sue covers this story as well over at her blog, Hellooooooo.....Mr. President, Are You Listening? 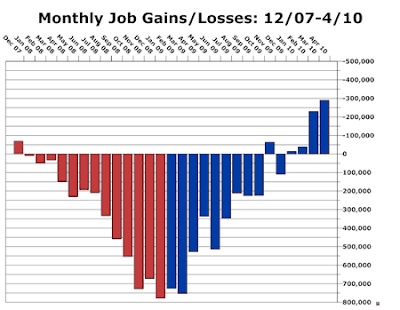 David Indiviglio of The Atlantic further explains the high unemployment rate:
"In the early 1980s, the national unemployment rate actually rose to 10.8% -- higher than the max of 10.1% this recession hit in October. Yet, during the early-80s recession the percentage of unemployed who remained jobless for at least 27 weeks topped off at just 26% -- far lower than the 46% in April.

The reason for this high duration is likely due to the structural unemployment caused by some industries undergoing significant changes during this recession. Construction and anything else real estate related, in particular, stand out. The unemployment in most recessions is largely cyclical in nature. "

This long duration for the unemployed is a serious problem on many levels. It's obviously a huge problem for those jobless. As Derek noted earlier, it can hurt your job path, skills, and prospects to be unemployed for an extended period. Psychological harm can also result, as people may become more discouraged.
Posted by Shaw Kenawe at 9:11 PM

it is good news, huh!! Rachel just talked about this on her show too. Aaaah, The bikini Chart, it doesn't lie!!

WARNING:
Those who believe this are dumb and gullible!
I don't believe it. The statisticians have a plug they put in.

It has also been reported that there are currently 600,000 PART-TIME census takers now working.
I don't get how payrolls could expand and the unemployment number goes up. It is all smoke and mirrors.
This crap has been all over the news all day. Had to be some idiot in one of Obama's focus groups that came up with the unemployment rate going up because more people were looking for work.It's one of the most bizarre things I've ever heard and the lame streamers don't question the logic one bit.What would happen if all 10 million unemployed went to look for work next week, would unemployment go up to 30%?

Like mushrooms that appear after the rain, here come the whiners who hate good news for the Obama administration. It spoils their narrative, which is everything that happens in this Administration is Marxist-Commie Nazi Kenyan smoke and mirrors.

Somehow, in their unhappy little minds, the Obama administration is making this recovery up!

Forget facts and charts [they matter only when the GOP uses them, say for explaining why we need to invade countries that did not attack us].

Of course you don't believe this, TigerHawk!

I bet you don't believe Mr. Obama is a US citizen either.

Thanks for coming by and illustrating perfectly Obama Derangement Syndrome.

For those who are not suffering from ODS, here is the pdf from the Bureau of Labor and Statistics.

"Pay no attention to the unemployment rate — that is, if you’re trying to make sense of today’s jobs report.

It is an excellent report. The economy added more jobs last month than it had in four years. Over the last two months, employers have been adding jobs at a rate faster than the population is growing. If that continues, the unemployment rate will soon start falling.

It rose last month because of a something of a statistical quirk. The Labor Department counts people as officially unemployed only if they are not working and looking for work. Between March and April, there was a surge in the number of out-of-work people who started looked for work. That — not job losses — is what swelled the ranks of the officially jobless and caused the unemployment rate to rise to 9.9 percent, from 9.7 percent."

Shaw, facts are way too complicated for the deranged to understand, and besides, when you hate someone you don't have to acknowledge when they do something good. You can just deny it so you can keep hating.

tigerhawk starts off his comment by saying people who believe the report are dumb and gullible, then he continues calling the report smoke and mirrors and crap and then guessing that it "had to be some idiot" in an Obama focus group.

The best part is where TigerHawk repeats one of Sarah Palin's favorite phrases "lame stream" as in "media."

Tells you a lot about TH that he listens to a dunce and repeats her nonsense.

"The hiring of 66,000 temporary government workers to conduct the census helped overall payroll growth last month. However, private employers - the backbone of the economy - boosted jobs, too. They added a surprisingly strong 231,000 positions last month, also the most since March 2006, the Labor Department reported Friday."

I think part of the reason these right-wingers keep repeating lie after lie is because they don't or can't do research, so they depend on mind deficient caricatures like Palin and Beck.

I tried to track this down. The 600,000 census workers appears to be a reference to future hiring during the summer, and would not show up on past employment stats. Or so it sppears.

Hope you had a great Mothers Day Shaw!