A CALMER YET MORE BAD-ASS PREZ, EVER! 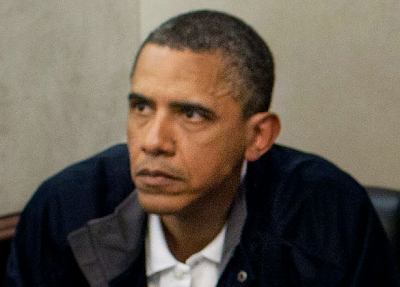 This is a photo of President Obama watching in real time the invasion and taking down of OBL.

Here are some comments from the blog "Wonkette" about this amazing photo:

"Damn socialist/muslim isn't even wearing a tie! He's disrespecting bin Laden!  On the plus side, he doesn't have his feet up on the desk."

"He's a vicious fucker. First he kicks The Donald in the nuts, laughs about it, and then orders two bullets to the head of OBL. I voted for him out of hope but the second time will be out of fear."

"That look would certainly make most teabaggers cross the street or piss themselves."

"He looks like he is thinking we are going medieval on this bin Laden motherfucker."

"I go with the Celebrity Apprentice caption. Yeah, you fucking moran, Trump: you couldn't handle Hopey making fun of you at the dinner Saturday night. Fuck, you're such a pussy even Seth Meyers made steam come out of your ears. And that was what he did to you in public, you freak."


"Hint to Trump: do not let yourself get caught in a room alone with the prez. When you're summoned to the meeting, you step into the office and he nods at the Secret Service Agents, who step out of the room and shut the door behind them, BEG FOR MERCY. Or start saying your beads, or whatever. You are dead meat."

"I can't think of a calmer yet more bad-ass prez ever. I mean he must have known this huge shit was going down that could have wrecked his career, ruined the Dem party for 30 more years, gotten Pakistan civilians and SEALs killed if it turned into a usual rescue-mishap snafu/clusterfuck --- all the time he was busting on Donald Trump & Fox News at the WH Correspondents Dinner etc. "

"Repugs could never have ordered this hit -- because they would be too frightened if it turned into the "Jimmy Carter Iran rescue" -- and they couldn't control the narrative a la the spurious 'Jen Lynch rescue' and 'Pat Tillman hero.' "

"It's interesting how you can tell he's the boss in the room despite his sitting in the corner dressed like he came to change the lightbulbs."

"Mark my words, that photo will be used from now 'til Election Day to scare the bejeezus out of White Olds in campaign ads. Some versions will 'shop him crouching at the foot of their granddaughters' beds."

"There is not a single Holy Bible or image of Jesus visible in the entire photo. These people make me SICK!"

It took balls and he's got them. of course I knew this when he took on health care.

I wish he'd revisit that one about now.

I love that collection of pictures, puts to rest any doubt bin Laden was already dead and this never took place!

"That look would certainly make most teabaggers cross the street or piss themselves."

Frankly, I'm voting that the teabaggers piss all over themselves. They already stink to high heaven.

From Marge Innaverra, writing in the comment section of The Wall Street Journal online, in response to an article by Carol Lee about the president's upcoming visit to Ground Zero, and who called Mr. Obama a "controversial figure."

Ms. Lee, of course, never bothers to give any information on why she describes Mr. Obama as "controversial." It's just her editorializing in a news report.

If W had done jack squat about bin Laden during his 8 years in office, he might have deprived Obama of the opportunity to nail the terrorist himself. It was very kind of W to leave that job to Barack Obama.

Just like the deficit and joblessness, right? Obama owes Dubya a big thank you for all the great opportunities to be heroic that he left on the table."

These were interesting too:

"11:53 am May 4, 2011
WSJ Idiocy wrote:
.Our President is only a “controversial figure” in your pointed little heads. The stupid is very strong in you, Ms. Lee (or should that be Ms.Leads)
.
11:09 am May 4, 2011
Puck wrote:
.After reading over both the article and the comments here it’s no wonder that thoughtful people everywhere are now calling this drivel-driven rag “The Wall Street Urinal”."
.

“The most important thing is for us to find Osama bin Laden. It is our number one priority and we will not rest until we find him.”
- G.W. Bush, 9/13/01

ya..... we should all thank Bush for his amazing display of leadership, statesmanship and bullshitmanship.

Amazing how the right wing concocts deceptions and outright lies in the name of SPIN and still get away with shit. Never trust a person who lies, but damned if you can convince Teahoos of that.

"Here are some comments from the blog "Wonkette" about this amazing photo:

Wonkette is the same blog that recently bashed a mentally disabled boy saying he could not dream or anything. So they are at times serious when they use hate speech.

dmarks, the comment you quoted from Wonkette is written as parody.

Yes, I know. On that one particular quote. But sometimes they are serious with the hate speech (even losing sponsors over it), and based on that they are hardly a credible source.

Actual serious Wonkette quote, part of their effort to cut down Sarah Palin by cutting down all children with Down Syndrome: "What’s he dreaming about? Nothing. He’s retarded.". But when can you expect. As Rahm Emanuel would say, he's just a "f***ing retard" and deserving of no respect. Maybe some day he can bowl in the Special Olympics and be bashed by the President on the Letterman show.

So dmarks, are you going to give Obama any kudos for getting bin laden, or will you stay true to form and keep hatin' on Obama?

Sorry ... but I've never been "true to form" hating Obama, etc. I think you are making this up.

On this issue, Obama deserves all the laud and accolades he is getting here and elsewhere. Both for "getting bin Laden", and how he has personally handled the aftermath.

Actually, It was GWB who authorized the "enhanced interrogation techniques" that produced the intel that lead to the location of OBL. President Obama was there at the end of that long process and made one easy decision.

Obama needs to acknowledge the facts. EITs work and therefore most of the credit belongs to GWB.

At least that is what I've heard the Republicans say.

It certainly was not an easy decision. W-D I know you are just kidding, but to be serious, Knowing how the Iranian hostage rescue attempt blew up in Carter's face certainly had to weigh on his decision to give the go ahead. Just think if it had failed and we saw dead Americans being dragged through the streets ala Somalia, or live SEAL members paraded on camera in front of a Triumphant bin Laden. I took a huge amount of guts. Bush probably would have ordered an air strike, declared victory, and moved on.