All eyes are on this historic upset because of Hochul's GOP opponent's (Jane Corwin) support of Paul Ryan's drastic Medicare killing bill.  In the end, Corwin tried to distance herself from the plan, but to no avail.
Just a week ago Progressive Eruptions reported that Senator Scott Brown (R-MA) said he would vote for Ryan's bill, only to have his spokesperson try to walk back that announcement, and now this week Brown has said he would NOT vote for Ryan's bill--a complete 180!
GOPers are looking at a tremendous upset and will have to rethink their support for what was initially hailed as a courageous proposal by Ryan that has now turned into a disaster for those who support it. 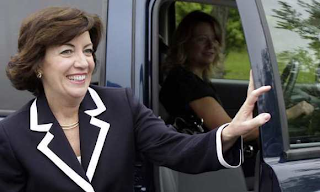 
"Democrat Kathy Hochul has won a special congressional election in a conservative pocket of western New York, a race dominated by the national debate over House Republicans’ proposal to overhaul Medicare, the Associated Press reported Tuesday.

The AP called the race shortly after 10 pm ET"

"The results set off elation among Democrats and soul-searching among Republicans, who questioned whether the party should rethink its commitment to the Medicare plan, which appears to have become a liability as 2012 elections loom.


Two months ago, the Democrat, Kathy Hochul, was considered an all-but-certain loser in the race against Jane Corwin. But Ms. Hochul seized on her Republican rival’s embrace of the proposal from Representative Paul D. Ryan, Republican of Wisconsin, to overhaul Medicare, and she never let up.

Voters, who turned out in strikingly large numbers for a special election, said they trusted Ms. Hochul, the county clerk of Erie County, to protect Medicare.

“I have almost always voted the party line,” said Gloria Bolender, a Republican from Clarence who is caring for her 80-year-old mother. “This is the second time in my life I’ve voted against my party.”

Pat Gillick, a Republican from East Amherst, who also cast a ballot for Ms. Hochul, said, “The privatization of Medicare scares me.”

The district, which stretches from Buffalo to Rochester, has been in Republican hands for four decades, producing influential Republican figures like Representative Jack Kemp. The campaign drew intense interest, with both major parties in Washington and their allies flooding the district with radio and television advertising. Total spending exceeded $6 million."

So cool. Let's get someone to run against Eric Cantor R-VA!

Great news but we can't afford to get complacent. I think it's a given that Republicans will step up their anti-voter agenda because of Hochul's win. And being the complete hypocrites they are, they're sure to say "the people have spoken, I've heard them and I never really supported the Ryan plan." And the same ole folks will fall for their lies.

Charlene - Cantor needs a heart transplant and we can only hope that the surgeon's knife slips during the procedure.

Leslie is right! The diehard foolish sheeple of the republican party will say aw shucks the GOP never really wanted to destroy Medicare, that's just the lamestream media twisting their words...So I guess we'll wait and see if the Ryan plan support starts to wane.

Cantor yes, and I hear Paul Ryan might be in trouble too!

Wonder if Jane Corwin will
come up with 7000 more GOP votes..there is a county clerk in Waukesha, WI that
has them on her home computer....

and in a somewhat weirder universe, but still on the political side, Mitt today is taking credit for suggesting the GM and Chrysler bailouts...

apparently before, or maybe after, he was against them...

Dave, it is my opinion that women named Michelle (double "l") tend to be quite gorgeous. ;)

hey shaw, my wife is a one L michele, and i happen to think she is pretty gorgeous too...

LOL! Dave, that was my lame attempt at locking Michele Bachmann out of my opinion. I didn't know that the one "l" Michele was that common. My niece is a Michelle with two "ls." And before Bachmann, I've never seen the name spelled with one "l."

Anyway, it is my opinion that the Micheles and the Michelles I know of ARE beautiful.

I hope that clarifies my goof.