Wednesday is Trump "The Biggest Liar of 2015" Hump Day 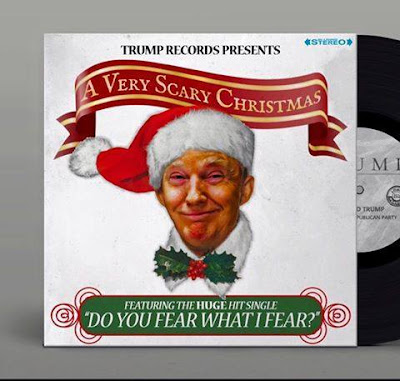 
In 2012, as Obama was running for re-election, Trump called Clinton “terrific” again in an interview with Fox News, saying she performed well as Secretary of State.

“Hillary Clinton I think is a terrific woman,” he told Greta Van Susteren. “I am biased because I have known her for years. I live in New York. She lives in New York.

This is the character the TeaPublicans believe would be a great representative of the United States of America on the world stage, because he's not pc !

He's just good old fashioned vulgar, crass, and boorish.   Someone to make the TeaPublicans proud, because, apparently, he's just like them:


Trump on Hillary this past week:


Even a race to Obama, she was gonna beat Obama. I don't know who would be worse, I don't know, how could it be worse? But she was going to beat -- she was favored to win -- and she got schlonged,* she lost, I mean she lost," Trump said, using a vulgar Yiddish word for a man's penis.


*schlonged To be cockslapped by a man with a large penis. 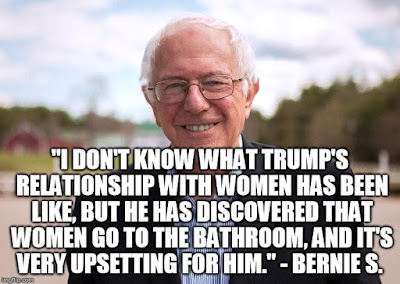 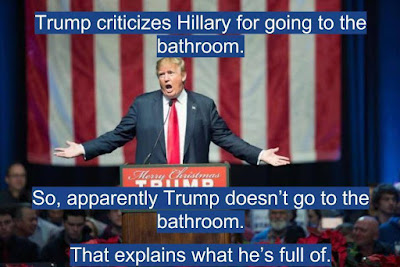 Trump assured his adoring fans that he would never kill journalists:


In a strange segue in which he defended Russian President Vladimir Putin from widely reported allegations that he has ordered the killing of journalists, Trump went on to consider whether he himself would consider killing reporters, whom he then blasted as "lying disgusting people." "I would never kill them. I would never do that," Trump said at first, before reconsidering.


And finally, the Trumper gets his biggest acclamation at the end of this year:

In the 12 years of FactCheck.org’s existence, we’ve never seen his match.

He stands out not only for the sheer number of his factually false claims, but also for his brazen refusals to admit error when proven wrong.

Why did Trump say that Hillary Clinton going to the bathroom was just "too disgusting to talk about"? My theory is that Trump has his wives medically altered so they don't have any bodily functions that he finds disgusting. No peeing, no farting and, God forbid, no pooping. It's bad enough that Trump is so reprehensible, but the people covering for him are even worse.

I love "Do You Fear What I Fear." I think we agree to fear the idea of a President Trump. Eek!

Even the following of the inane Trumpf grows stale after awhile. It seems 1) intelligent folks get it right away, and 2) the low information and or low intelligent folks probably never will. They like what they hear and apparently never question anything; beyond what's for dinner.

It's time to take a break and enjoy the finer and saner things life has to offer is how it seems to me.

I think the fact checking people can retire "Biggest Liar" as long as tRump is around. The wingnuts call Hillary a liar but say nothing about the biggest weasel-liar on the planet? And when he's caught lying he blames someone else for his lies? We pray every day for tRump to get the nomination.

Trump is a disaster for this country and what the Tea Party Republicans deserve for their long, slow descent into oblivion and stupidity. He's a perfect representative of all that is rotten and disgusting in Republican politics.

Politics such a grind,
it really was time to unwind.
Brewmaster Nick had crafted Fifty Two,
so we all decided to have a few.

As the night wore on with brews a flowing,
the spirit of the season just kept a growin.
When it grew late and time to part,
we all paused to offer a fart...

To that Great Man of gas known to all as Trump the Bloviàting chamber of perpetual human flatulence.

I guessed that the first photoshop meld on the Christmas album must have been done with an image of Fred Astaire. Maybe it was a double-meld where they took the facial features of Astaire and put them on the Crosby album cover. Either way, it doesn't really look very much like Trump anymore. It's a disgrace to both of our beloved superstars of yesteryear.

Here is the Crosby picture the image was taken from.

Its just difficult to understand why Trumps poll numbers keep rising. They cant all be "low information" voters or "blue collar folks," or "high school dropouts."

Will this damn Trump snowball continue rolling down the hill picking up steam?

"Its just difficult to understand why Trumps poll numbers keep rising. They cant all be "low information" voters or "blue collar folks," or "high school dropouts."

Trump's supporters probably include people whose IQs are average or even above (I doubt that), but who mistake boorish gutter talk for "non-pc speak," or "telling it like it is." Those people are so angry and fearful that they'd overlook a creature as clownish and vulgar as Trump because they believe he'll make America great again, when in fact he's already dragged it into the gutter.

"Will this damn Trump snowball continue rolling down the hill picking up steam?"

Who knows, but I would bet on it because, "Nobody ever went broke underestimating the intelligence of the American people."

"Republicans are coming around to the idea that the Republican Party has its best shot at winning the presidency by nominating" Donald Trump, which is to say, about half — up from about one-third in August — now believe in this unbelievably absurd delusion.

Somehow, the Republican base is swiftly convincing itself that its nominee can retake the White House without women, Hispanics, blacks, Asians, the young and the educated. The Bubba and borderline psychotic and hardcore-thumper vote will do, indeed it can do, according to crude commoners who mistake a fringe-packed auditorium for the general electorate.

The Republican base convinced itself in 2008 that Sarah Palin was ready to step into the presidency should old man McCain kick the can while he was in office; the Republican base was also convinced that Mittens "My cars have elevators in my home" Romney was going to beat Mr. Obama in the 2012 election. By screwing around with gerrymandering, suppressing the vote of minorities and other cheats, they've been able to dominate state elections, but once their underhanded cheating is reversed, the present GOP will be nothing more than a group of tired old white guys who tried to stop marriage equality and universal health care, and shutting down Planned Parenthood. They've failed at all of that, so that's why a loud-mouth, angry, lying piece of idiocy, Trump, fascinates them. He's their last best shiny hope of regaining dominance for their anti-American, anti-Constitutional hopes and dreams.

Na Ga Happen. Trump will never be president. You can't win a national election with just the base of the Tea Party GOP votes.

Why are we being subjected to this?

They're rising in polls of Republicans. If you read right-wing sites, you know that a huge chunk of the Republican base is currently engulfed in a paroxysm of rage against their own party's leadership. That chunk, the most delusional and deranged subgroup of Wingnuttia, is gradually settling on Trump as the vehicle of their fever-dream fury and rebellion.

Will this damn Trump snowball continue rolling down the hill picking up steam?

For a while yet, yes. It may pick up enough steam that Trump wins the Republican nomination. After that -- well, you know what effect enough steam has on a snowball.