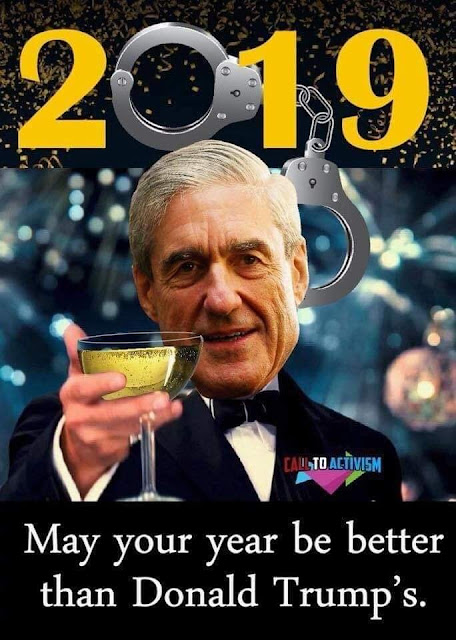 Another year of reading #45's stupid, uninformed and foolishTweets. President Raindrop knows nothing about how our government works, and all the president's helpers are deserting #45's Ship of State. 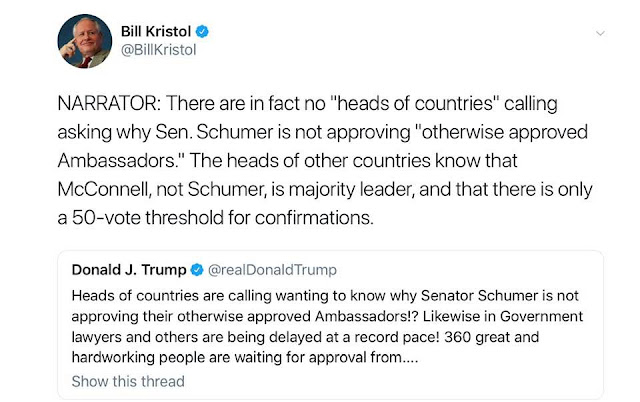 (And never forget that we now have SIX retired GENERALS of the much fetishized and vaunted military who have either left the morally diseased POTUS or refuse to work for him.)


Trump claimed he knew ‘more than the generals.’ Now they want nothing to do with him.


Retired Gen. David Petraeus Suggests He Would Reject Offer To Serve Under Trump

Trump does not need the votes of Congress to continue to harm America.
Trump will destroy as much as he can before he is forced out of office.
Trump already has a one hundred million dollar war chest for the 2020 election.
As seen by the fight for Pelosi's leader seat, the Democrats are divided.
The candidate for the president in 2020 to watch is the Republican who finally gets the Republican party to dump Trump.

Yeah. The Mother Ship is all pissed because the honorable generals want nothing to do with the liar in chief. tRump is dishonorable and a fool. The military brass knpows this. I wonder if the Trumpers think the generals have lost their sh*t over tRump. Or ya think they just knows a stupid, lying cheat? Anywhoo they've don't like him. But the base still clings to the lying babboon!

2019... A year in which the Orange Turd will no longer consume my disdain and the energies required to fuel it. Folks have a right to be stupid so for 2019 the plan is let then be stupid w/o remark or critism. One will not change the minds of those whose intellect was stunted and shuttered a long time ago Shaw.

Why is it that when Hillary Clinton and the Democratic Party were caught and exposed for rigging primaries, cheating in debates, engaging in election fraud, violating Election and Campaign Finance Laws, and, in the end, altering the election by giving Hillary Bernie Sanders' earned Party Nomination ... yet continue to claim the Russians interfered in / attempted to alter the 2016 election.

Also Hillary Clinton was exposed to have illegally coordinated with and paid foreign spies and Russians for Russian-authored propaganda ... yet Democrats / snowflakes insist without substantiating evidence that it was President Trump who did what Hillary did.

You need to provide evidence for everything you claimed in your comment, otherwise it's just made-up crap from FAUX NOOZ and the bowels of Trump's base.

Made up “crap” ???
I don’t think so , and neither do the majo of Americans.
So come on now Shaw, let’s not get ridiculous. Isn’t what I said abo Hillary true!
I know that you are a Trumy hater, but let’s be honest here.

If what you claimed about Hillary were true, she'd be in jail or at the least under investigation by the FBI.

It's not true; she's not in jail, and she's not under indictment or being investigated by the FBI.

Trump IS being investigated by he FBI.

You did not back up one of your claims with any evidence. So, yes, it's all crap.


“Trump IS being investigated by he FBI”

“It's not true; she's not in jail, and she's not under indictment or being investigated by the FBI.”

YOU MEAN NOT YET!

The documents like the Clintons, the FBI and the media as parts of the conspiracy.

Jennifer... no doubt HRC played dirty in the primaries. But that is not a federal offense as the political parties, the GOP included, have a right to pick their own nominees. Now, you cannot commit voter fraud, and that has never been accused, except from the right.

As for Election Finance laws, lots of politicians error in this, and when pointed out, they admit fault and pay the fine. Both Dems and GOP folks have done this. So, that's not a big issue either.

As for illegally working with the Russians, and paying spies, you should show your evidence to your favorite Trump Congressperson, if he or she still has a job. Because they've been trying to pin something/anything on HRC for years to no avail.

She's been investigated off and on for the last 25 years and the GOP has never found anything.

Why do you think that is? She must be innocent or the GOP must elect the most inept investigatory ppl we've ever known.

Greetings Again Shaw: Based on your "conversation" with Jennifer, I can fully appreciate what you were trying to say to me in your last thread...I admire your resolve and also the classy rebuttals given by both you and Dave Miller. Personally I could never run a blog the way you do simply because I could not abide by the snark/nastiinest on a daily basis...Noteworthy is how the hard core base resorts to the tactics of drawing moral equivalence, e.g., they never fail to bring up the Clintons or the Obamas when confronted by Trumpian prevarications and malfeasance. It's as if they are absolving Trump simply by uttering Hillary's name. I fully know some of Clinton's shortcomings and I certainly don't need Jennifer to remind me of what they are...as if she/he were the supreme arbiter of what moral failings are. What is absent from the hard core is admission of amoral conduct by their guy...Anyway, you already know this. Thanks for listening.