GOP Chairwoman Wants D-Day to be About Trump!

I've been calling trump supporters "TrumpCultists" for a while now.

After reading what the GOP chairwoman tweeted, you can understand why that is a perfect description of them.

When trump had the opportunity to serve his country, his father got a doc to make up a fake ailment (bone spurs) to keep him out of serving in Vietnam.

Now, the GOP chairwoman wants D-Day to be about the Vietnam draft-dodger who said being fearful of getting an STD while screwing around with women during the Vietnam war was "his Vietnam."

That's who the Trumpistas admire. 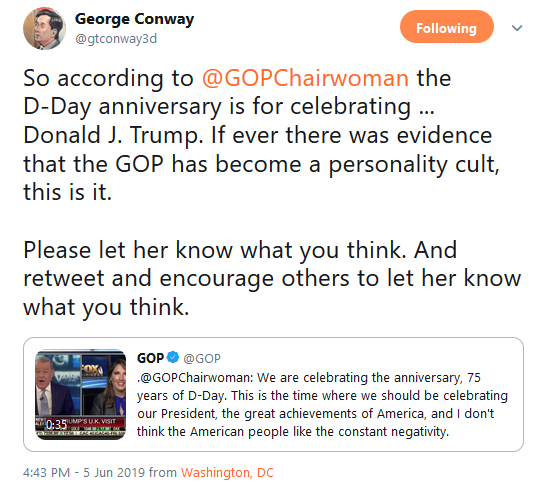 This photo of the American cemetary in Normandy was taken while Mr. Shaw Kenawe and I visited that special place. It was privilege to have been there and to understand the immense sacrifices America and her allies made in the cause of freedom.

What a disgrace to America this idiot p.o.s. is!

At least he didn't make us look bad today at the D Day remembrances.

FOX News took care of that though laughing about Dems using kids as props as they sat in front of thousands of graves of soldiers who died on Omaha Beach...

Anon I understand your frustration.

Dave, Trump did a good job of reading other people's thoughts and words. He is incapable of speaking like that on his own. What we saw and heard while he was in GB is the real Trump. And we're a poor nation because of him.

I listened to Trump. The words were fine. Although they were spoken without any real emotion or conviction. I give Trump a C+ overall.

Not many can give speeches like Reagan and Obama could on solemn occasions.

I'm surprised the the so called patriotic crowd is not protesting in the streets against our crooked president Trump.

RN, You did forget to add WJC into the giving a great speech group. Bush was horrible as was BHO who spoke in blurts.

JC, D-Day is to honor all service people who fought at Normandy even those who lived.

He is indeed a complete moron. His emotional intelligence is well under water.

Skud,
I am not JC.
I should have put and/or.
Certainly Trump deserves no honor for D-Day, which his spokespeople tried to claim.
Your negative opinion of Obama, which you post on this blog regularly, is based on false, biased facts, which is more than just your opinion and you are wrong.By the way, Obama is known for his great oratory, so you are in a minority in that opinion.

Jerry, skudrunner betrays his jealousy every time he insults President Obama. He, as well as the far right wing crowd he comments with, know in their deepest heart of hearts that Trump is a walking, talking misery of a human being who has no knowledge of how government works, is devoid of human decency, and cares only for his glory and money. And they know Mr. Obama is completely the opposite of that wreck of a human being, so they MUST denigrate Mr. Obama every chance they get to make their ridiculous preznit look good.

A majority of Americans and our allies in Europe ADORE Mr. Obama and all he stood for.