To show you how mentally unfit Trump is...

here is what he tweeted out on Friday while talk of impeachment, betrayal, and lawlessnes by him and his administration was all over the media:

"To show you how dishonest the LameStream Media is, I used the word Liddle’, not Liddle, in discribing Corrupt Congressman Liddle’ Adam Schiff. Low ratings @CNN purposely took the hyphen out and said I spelled the word little wrong. A small but never ending situation with CNN!"


And this was tweeted out by a user on Twitter:


"The name Trump will go down in history as the name of a traitor. Children will use it to taunt others. Generations will blurt it out to remember when Americans lost their minds and let a criminal occupy the Oval Office."


I say Brava! to Speaker Pelosi for her steadfast determination and grit. She is doing the correct and patriotic thing by starting the impeachment inquiry. I'm betting more people who know of Trump's corruption and criminality will come forth with other evidence of his malfeasance and betrayal of his Oath of Office. 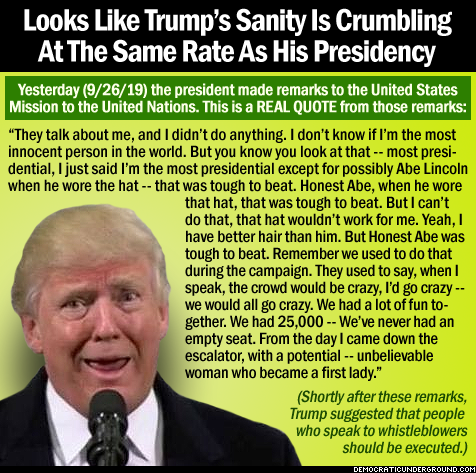 And on a lighter note, this Tweet from Conservative pundit, Rick Wilson:


Rick Wilson:"Repubs are so nervous right now that if they put a lump of coal between their butt cheeks, a diamond would pop out.”
Posted by Shaw Kenawe at 12:22 PM

I can't take it anymore.

Now we have reports that Former Chief of Staff John Kelly would mute President Trump's calls to world leaders to avoid him saying stupid stuff.

And yet the defenders of this president insist the media must be lying and/or making all this up.

But the report on Kelly follows on the heels of reports of Former Sec State Tillerson calling Trump a moron who is undisciplined and doesn't like to read.

On top of reports of Former Sec Def Mattis believing Trump to be taking America on a dangerous path.

On top of reports from Former Nat Security Advisor McMaster calling Trump an idiot and a dope.

Now I guess it's possible all of these reports are made up fake news BS stories. But these guys took oaths to preserve and protect the constitution and defend the United States against ALL enemies, foreign and domestic.

If those stories are in fact false, based on the damage those "falsehoods" are doing to our president, don't those leaders have a duty to step up and say all those reports are false?

And if they are true, don't they have a duty, under their oath to say that too?

Both sides cannot be true.

Either these stories are true, or they are not. Those former military leaders would know.

They have a duty to stand up and tell the American people the truth, one way or the other. For the good of the country.

Dave Miller, you seem to spend a lot of time wishing and hoping something bad happens to Trump. Maybe you guys should just come up with ideas to improve things rather then wishing.

Anonymous @3:37, Dave can speak for himself, but since this is my blog, I can also respond to your comment.

I've known Dave for many years, there isn't a malicious bone in his body. He's devoted his life in the service of others. He doesn't wish or hope for anything bad to happen to anyone.

What I think Dave hopes for is justice. We've suffered through 4 years of hearing Trump denigrate not just his opponents, but his own people, we've heard 4 years of lying, we've been shown how easily he cheats on his wives and even his mistresses. And now we see how easily he betrays America.

I'm with Dave in that I wish for justice as well and for Donald Trump to pay whatever penalty is in store for him for his lying, cheating, and demeaning the United States of America with his malicious narcissistic corruption.

Anon... I'm at a loss to see how my comment can be seen as wishing anything bad to happen to happen to Pres Trump.

Read it closely. Pres Trump has claimed he's innocent. Maybe he is, maybe he isn't. If he is innocent, let people go on record, under oath, saying so. And let's start with John Kelly, a former decorated soldier.

Just ask him if Trump said what he's reported to have said.

If he's innocent, then John Kelly, under penalty of perjury, can say Pres Trump never said it. He wouldn't betray his oath would he?

You see, there's the rub. Trump can't let those guys testify. Because they'll have to tell the truth.

I ultimately didn't wish bad on Nixon either, a man I helped reelect in 1972. But he committed a crime and needed to be held accountable. The same is true for Pres Trump.

There is something very wrong mentally with Dotard.

Yeah, he's a mental and emotional midget. His growth was stunted at about age 8 or 9 years of age is me guess.