They Take Lessons in Lying From Trump 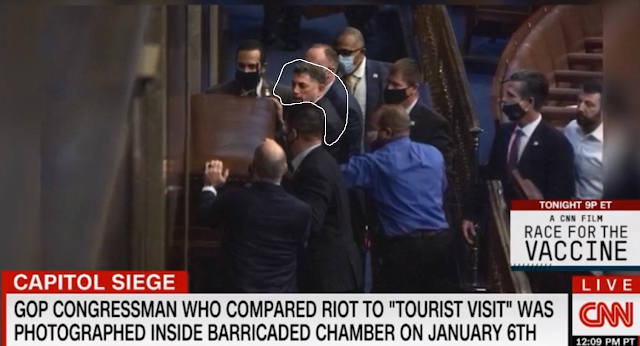 "A photo emerged of a GOP lawmaker who last week downplayed the Capitol siege and compared the rioters to tourists barricading the House doors with furniture on January 6.
Rep. Andrew Clyde said during a House oversight committee hearing on Wednesday that it was a "bald-faced lie" to call the riot an insurrection. He said the riot, in which hundreds of Trump supporters breached the Capitol, resembled a "normal tourist visit."
After Clyde's comments, a photographer shared a photo he had taken of Clyde using furniture to barricade the House against rioters trying to force their way in to disrupt the certification of President Joe Biden's election victory.
Several people died in the riot.  "The normal tourist visit."
Trumpublican Representative Clyde also falsely claimed that police officers had not confiscated any firearms from people who breached the Capitol.
When your leader is a known LIAR, cheat, and fraud, you are compelled to out-lie him any chance you get. So Trumpublican Rep. Clyde told a rotten lie about what happened on January 6, and a photographer who captured him barricading himself along with other House members, exposed Clyde for the lying liar that he is.
That, dear friends, is Trump's legacy for the party once known as the GOP. It is no longer The Party of Lincoln, but has become, under Trump, the Party of Liars, Cheats, and Frauds.
"The past was erased, the erasure was forgotten, the lie became the truth" - George Orwell 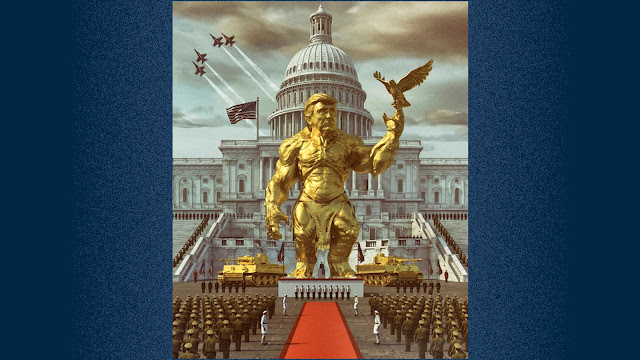 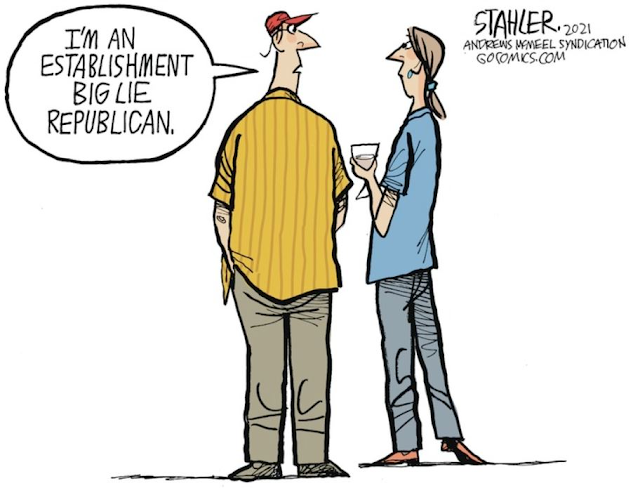 It's a widely held belief.
From today's mothership:

'Internet says she voted with Trump 92.9% of the time. But she voted to impeach Trump and she also is totally on board with the lie that the Jan 6 event where Capitol Police invited people into the capitol being a riot, incursion, attack, etc.'

What's really sad is their lies are blatant lies that are easily disproved. And they don't seem to care.

To "Suzanne" the troll who left a half dozen comments in Comment Moderation.

Ask your pal Lisa to start her blog back up so you can leave your droppings there.

We don't allow offensive waste products to be deposited here.

And have a nice day.

Ducky Those who sail on the Mother Ship are irredeemable. I've said this so many times. Our friend, Dave Miller, didn't think that was quite fair, but since the January 6th insurrection incited by Trump and the M.S.'s silence on it, he, too, believes they are irredeemable Trumpers.

Also, President Biden called what the Turks did in Armenia "genocide," and the Captain of the Mother Ship, an Armenian who's wanted presidents to acknowledge it for years, said nothing about Biden doing the right thing. She just could not bear to write anything positive about President Biden because her rabid followers would call her an infidel! Irredeemable!

Mike I don't know how long a country can hold together when 30% of its people live in a world of lies.

Without lies, conspiracy theories, racist language and dog whistles and hypocrisy, today's Republiclowns would have nothing at all to say. Sounds like Heaven to me, personally.

An actual quote from the Mother Ship:

"But – that said, Liz rode her renegade pony too far off the reservation and got herself lost in the deep, dark, dank Dump-Trump bogs. She has every right to her opinion of the guy, and I admire her courage in speaking her mind on it, but anyone with her level of power and authority in the party leadership needs to remember that words have consequences, and you just don’t crucify a past potus simply because he occasionally got your knickers in a wad."

So having the POTUS continue to tell THE BIG LIE, that the election was STOLEN, is no big deal to them, and Liz was foolish to keep bringing trump's BIG LIE to the attention of Americans? Liz's refusal to repeat that BIG LIE, is called going "too far off the reservation?" And reminding Americans that Trump lied about the election being stolen is "crucifying" him?

Those people are living, walking examples of anti-democracy shitheads. And if I had the power, I'd never let them vote in an election ever again. Why give the right to vote to people who would destroy American democracy?

It is what it is. It will continue to become something much worse.

The one time most productive and wealthiest nation on the planet when it actually supported truth and was a beacon of freedom and liberty to (for) the rest of the globe has morphed into Stalin and Putin's most fond desires.

trump accomplished in just 5 short years what no other American politician before him (since the civil war) or any foreign dictator could. Turn Americans against their fellow Americans all based on lies and deceit. trump must be very proud. The asshole that he is and always has been.

And here's the Captain sucking up to the passengers who believe Trump's BIG LIE:

Mother ShipIt’s like she went INSANE. She was getting on my nerves already when I happened on her doing CNN with Tapper and THAT was it. She’s sucking up to the LEFT and making Trump, and all of us Republicans who wish he was BACK, look like BIG LIARS, as she labeled his BIG LIE.

Poor deluded Trumper! 60 court cases ruled AGAINST Trump's legal team, and even his legal team TOLD THE JUDGES that there was no proof of fraud! Trump's own AG said there was NO FRAUD. The secretaries of RED STATES certified the votes AS VALID! Trump's own cyber head said it was THE SAFEST ELECTION IN YEARS!. But this clueless Trumper thinks Liz is making Trump look bad? Even GQP senators (Graham) and Reps. (McCarthy) are saying Biden won!

Mother Ship: "And, if she’s so certain the election was a fraud, let her answer to all the accusations even eye witnesses came forward with….point by point. Make YOUR POINT, LIZ, don’t just yammer on and on."

What in the name of all that's holy is she talking about???

Shaw, I noticed that the Queen Bee had nothing to say about Biden and the Armenian genocide, a topic she's normally vey outspoken on.
I wondered also if the reason might be her blind hatred of Biden. Apparently you agree.

Don't look to those poor deluded souls for anything enlightening. They're all in the same tribe and would never say anything against Trump even if he incited a mob of armed thugs to attack the US Capito, threaten to hang his vice president, and overthrow a free and fair election!

"BUT KID; what do you mean by THIS? “that the Jan 6 event where Capitol Police invited people into the capitol being a riot, incursion, attack, etc.” TELL ME! What the…?

The dems say there was a riot at the capitol. There wasn’t. It was a peaceful gathering infiltrated by some antifa/whatever people who did some violence. Cheney is down with accepting the dems mischaracterization. To the point of voting to impeach DJT. She is no supporter of America, just another POS politician who votes mostly according to how the demographics tell her to so she can get re-elected and keep raking in the cash." --KID

The lawyer for the QAnon guy with the buffalo's head who attacked the Capitol on Jan 6 said this about the attackers. "Capitol rioters are short bus people manipulated by the worst propaganda since Hitler."

That goes for the idiots attacking Liz Cheney.

"It was a peaceful gathering infiltrated by some antifa/whatever people who did some violence."


If anyone ever wondered how a country collapsed into fascism just go read the people on the Mother Ship and their self-deluding, smug, and completely batshit crazy statements on what happened on January 6 -- what an entire nation and the rest of the world witnessed, who the people were who perpetrated the attack, and who the instigator of the attack on American democracy is.

The fool who wrote the above quote is lost to reason and to truth. And THAT! my friends is how nations sink into authoritarianism: They disbelieve what's happening in front of their eyes.

The history of Germany in the 1930s and how the Germans worshipped a small, power-crazed, and deeply unhinged man should be a warning to those who lie to themselves, like the guy in the above quote.

They're not just lying to themselves; they're betraying their country.

The history of Germany in the 1930s and how the Germans worshipped a small, power-crazed, and deeply unhinged man should be a warning to those who lie to themselves, like the guy in the above quote.

History CAN educate if only we allow it.

Apparety 30-40% of Americans don't believe in studing and understanding the lessons of history. The ignorants simplyu believe in doing the same stupid sh*t over again expecting different results. They are truly stupid.


I find the Progressive clowns to be a dangerous threat, harmful and mostly full of it.
We are witnessing a party that is the most dangerous, and destructive to our nation. But as I said FULL OF IT, JUST LIKE THEIR LEADER.

Paula: The lawyer for the QAnon guy with the buffalo's head who attacked the Capitol on Jan 6 said this about the attackers. "Capitol rioters are short bus people manipulated by the worst propaganda since Hitler".

That's what I was going to write about. So there goes my comment. Anyway, here is a link to an article about the comment Paula refers to. The lawyer (Albert Watkins) also said (re the capitol rioters) "These are people with brain damage".

You're full of Trumpka! It wasn't "Progressives" who attacked our democracy on January 6 and who voted to overturn the election results.

You, Ed, and your friends are the people who are undermining American democracy and who defend Donald Trump, A LIAR, A CHEAT, AND A FRAUD, and the person who incited an insurrection against the United States. That is truth, and you can have your own opinion, but you can't have your own facts.

You and your friends have betrayed America.

Derv, "The lawyer (Albert Watkins) also said (re the capitol rioters) 'These are people with brain damage' ".

Thanks for posting that link, Derve.

That quote from the lawyer defending buffalo head Trumper aptly describes people like "Ed Bonderenka and the folks who sail on the Mother Ship.

"If anyone ever wondered how a country collapsed into fascism just go read the people on the Mother Ship and their self-deluding, smug, and completely batshit crazy statements"


They're on a Bash Biden kick today, calling Biden "demented" and everything else they can think of. What they don't talk about is that he has a 63% job approval rating by the American people...something their hero who's under criminal investigation never got close to!

Their envy and jealousy is obvious. They're seeing a POTUS, Joe Biden, popular and beloved! While p.o.s. Trump awaits his numerous criminal investigations!

So says Ed Bonehead; "We are witnessing a party that is the most dangerous, and destructive to our nation. But as I said FULL OF IT, JUST LIKE THEIR LEADER."

Oh I agree Mr. Bonehead - the Republiscumbag party is obviously the most destructive and dangerous (See 1/6/20201 as just one example) to our nation. Glad even someone as simple-minded as you agrees. Now if you'd only tell the rest of your mouth-breathing, knuckle-dragging, single-celled liars and hypocrites on the radical right the same, would be appreciated.

Perhaps the Trumpublican party will regain its sanity and legitimate purpose when gorillas sh*t cantalopes.