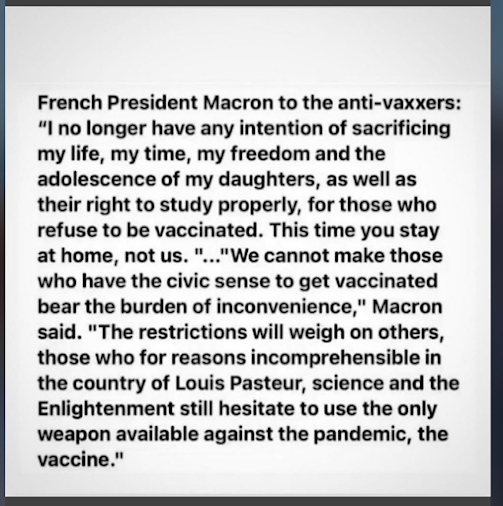 "Mostly Republicans and Trump supporters who are refusing to get vaccinated aren’t “owning the libs.” They are destroying themselves and their communities."--Jason Easley
Posted by Shaw Kenawe at 8:59 AM

Strong words, and well deserved. We can't let these idiots' endless wallowing in petulance and misinformation keep the world endlessly mired in disease.

It would be easy if those idiots would just die, but they are killing others. This is why the government has to have mandatory rules; for public safety and to save lives.

The Republican Party is waging a biological war against the United States.

They are willfully and maliciously spreading COVID-19 and are turning this into a permanent pandemic.

They are making us less free. Less safe. And they are literally killing Americans.

I am far beyond sick of these anti-mask/anti-vax morons. They act as if we haven't had vaccine mandates for decades already, like it's some brand new thing. Even as old as I am, I remember having to line up and get shots for several diseases to be allowed to enter school. I'm thankful for them, too. Polio, Rubella, Whooping Cough, Measles, Mumps, etc. etc. etc, and we had them mostly eradicated until these flaming morons decided that the 'big bad government' was somehow out to get them and that they were trying to poison their children. Mandate it already, and let's move along on the road to normality.