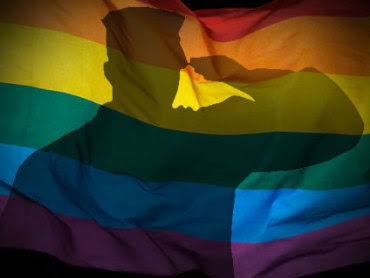 RACHEL MADDOW ON THE REPEAL OF DADT:


"...this is the President's victory. The President took a lot of criticism, a lot of abuse, a lot of skepticism from his otherwise most loyal supporters on this. But this is an issue on which the President did not waver. He continually insisted that this was possible. That it would get done.

It, in fact, was not possible for the President to do this through Executive action. This is something that had to happen legislatively if it was really going to happen in a definitive way.


The President did not waver. He DID work on the Senate to get this to happen. He insisted that this was possible against a lot of people, including me, saying it was not possible.


This is a difficult promise kept. It's not just a promise that was kept. It was one that was hard to keep, that cost a lot of political capital and a lot of work and this is the President's victory today and his base will reward him for it."

This is the statement from JD Smith of OutServe, an active duty military organization which supports repeal of DADT:

“Today’s vote by the Senate is a step forward for America. Today our military is stronger, our nation is stronger, and we are closer than ever to the day when our integrity will no longer be compromised. The vote to proceed to cloture on the repeal of the law barring honest military service by lesbian and gay soldiers is a victory for the thousands of lesbian and gay troops currently serving and a tribute to lesbian and gay veterans and those who have lost their lives defending our country.

OutServe looks forward to the day that repeal of this law is signed by our Commander in Chief and we can all begin to serve openly and honestly. We will remove the cloud that hangs over our gay and lesbian troops and live in a world where constantly worrying about losing everything we work and live for could be in jeopardy will finally end. As we await the implementation of repeal, expected to happen over the next year, OutServe is sensitive to the needs of our active duty troops and will remain a partner in making that transition smooth. There will come a moment when it will finally be completely safe to ‘come out’ and OutServe will be there to support the troops – gay and straight – when that day comes, hopefully soon.

There are so many people and organizations to whom OutServe is grateful as we celebrate being one step closer to equality. We won today’s vote because of the leadership of President Obama and our military leaders that have advocated for repeal. Our deepest thanks go to all of the organizations and individuals who have worked tirelessly for nearly 20 years. And our deepest thanks and admiration go to the troops discharged under DADT and proud veterans who sacrificed so much to educate the public and affect change at the policy level.”

“Gay, lesbian and bisexual service members posted around the world are standing a little taller today, but they’re still very much at risk because repeal is not final. I respectfully ask Defense Secretary Robert Gates to use his authority to suspend all ‘Don’t Ask, Don’t Tell’ investigations during this interim period. Until the President signs the bill, until there is certification, and until the 60-day Congressional period is over, no one should be investigated or discharged under this discriminatory law. Even with this historic vote, service members must continue to serve in silence until repeal is final. Certification and the 60-day Congressional requirement must be wrapped up no later than the first quarter of 2011. The bottom line: for now, gay, lesbian, and bisexual service members must remain cautiously closeted,” said Aubrey Sarvis, Army veteran and executive director for Servicemembers Legal Defense Network.

“We owe a great deal of thanks to many Congressional leaders who got us here today — Patrick Murphy, Susan Davis, Speaker Pelosi, and House Majority Leader Hoyer. In the Senate this would not have happened without Chairman Levin and Senators Lieberman, Mark Udall, Gillibrand, Collins and so many others. But let me also personally thank Senate Majority Leader Harry Reid. This is the defining civil right initiative of this decade and today’s bill passage would not have been possible without Harry Reid’s determined leadership. And finally, without commitment and a clear plan from the White House for the Pentagon’s Comprehensive Review Working Group, we would not stand here today. I have no doubt the February testimony of Sec. Gates and Admiral Mullen, Chairman of the Joint Chiefs, would not have happened without the President,” Sarvis said.


This is a wonderful day for all Americans--well almost all.  I imagine Sen. McCain, who said he would support the repeal of DADT if the commanders and military leaders said it was time to do so, isn't out celebrating.  When they said it was time to repeal, McCain said a study was needed to determine how the change would affect the military.  When the Pentagon study was released, showing that a majority of military personnel supported the repeal, McCain said further study was needed.  What happened to McCain?  His behavior during this whole process has been shameful.  He is on the wrong side of history, and he will forever be associated with those who wish to keep our gay brothers and sisters as second class citizens.

Andrew Sullivan over at The Daily Dish agrees:

We also know now what a McCain administration would have done: nothing. The disgraceful bitterness and rancor and irrationality that the Senator has shown these past few months reveal just how important it was to defeat him and his deranged, delusional side-kick in 2008.


Today, the Senate has taken an historic step toward ending a policy that undermines our national security while violating the very ideals that our brave men and women in uniform risk their lives to defend."
Posted by Shaw Kenawe at 5:04 PM

So we finally join the twenty-first century on this issue. No more humiliating and expelling soldiers because of some ancient taboo.

What happened to McCain? His behavior during this whole process has been shameful.

He might genuinely be an anti-gay bigot. He grew up at a time when that was the norm. But I think this year's primary challenge from the teabagger right spooked him. He decided he had to cozy up to the fundies, and now he's stuck with that.

A few years from now we will look back on this situation as bizarre. Alexander the Great was one of the greatest military leaders in history, but he wouldn't even be allowed to enlist in the US Army of 2010.

I'm thrilled. Even signed a "letter" from the President asking people to thank Reid, Pelosi and supporters and added a couple of my own brief thoughts.

McCain has never stood up for the men and women in the military, gay or otherwise. He talks war not people, which is why he has a D rating with most veterans groups. I wonder how he sleeps with himself at night - doubt that Cindy does.

Manchin of WVA voted against it, of course.

Imagine if McCain led the Revolutionary army instead of George Washington:

Friedrich Wilhelm Augustin Ludolf Gerhard (Frederick William Augustus Henry Ferdinand) von Steuben also referred to as the Baron von Steuben, (September 17, 1730 – November 28, 1794) was a Prussian homosexual aristocrat and military officer who served as inspector general and Major general of the Continental Army during the American Revolutionary War. He is credited with teaching the Continental Army the essentials of military drill and discipline, helping to guide it to victory. He wrote the Revolutionary War Drill Manual, the book that became the standard United States drill manual until the War of 1812, and served as General George Washington's chief of staff in the final years of the war.

Yes. Welcome to the 21st century. But why did it take a country that is supposed to be exceptional all this time to do the humanly correct thing?

I'm happy too, but I don't understand why we always lag behind other countries on these social issues.

As happy as I am for the Gay Community that one of their civil rights is being affirmed, the disrespectful, lecherous uncouth slob in me is looking forward to the headlines also.

"McCain sore over Gay Rights being rammed up his ass."


"Senator McCain speechless after DADT shoved down his throat."

Good riddance! There are some good reasons to bar people from military service, and this was never ever one of them.

Joe, you never disappoint me.

Very creative, and McCain deserves it!

the disrespectful, lecherous uncouth slob in me is looking forward to the headlines also.

Ah, if only Dick Armey were still around.....

But why did it take a country that is supposed to be exceptional all this time to do the humanly correct thing?

Let's see, the Bible was used to justify:

slavery
antimiscegenation laws
women's suffrage
antigay laws
(among many others)

We human beings righted these injustices. Soon anti-gay marriage laws will be struck down in all the states.

It has always fascinated me that we humans are more righteous (it takes a long time, but we do get there) than the inerrant word of god that supported all those injustices against humanity.

I just have one simple question...

With the repeal of DADT does that mean that John McCain's long suffering sidekick, Lindsey Graham, can now come out of the closet?

That gives me two reasons to celebrate.

Why would McCain say it was a “sad day”? That is a very peculiar choice of words, is it not? Why are our politicians using our brave men and women, gay AND straight, for politicial leverage? THAT is a disgrace! But then again, when haven’t they used PEOPLE for leverage? Oh my bad, I forgot, that’s what they DO!

I’m glad this horribly flawed so-called “law” was repealed today and like Shaw posted, I hope Gates will do the “right thing” and stop all investigations, etc., until it’s fully ousted.

But we can also be thankful for religious fanatics like Dr. King.

You said, and I quote, "I will also criticize those who give Obama a free pass for some sort of pragmatic homophobia just because he has a D after his name".

So, according to dmarks, president Obama "blocked" repeal earlier, and he's a confirmed homophobe. What makes you think he's going to sign the legislation repealing DADT?

Maybe he'll sign it because NOW it is pragmatic to do so -- seeing as most American's think DADT should be repealed AND a veto would damage his presidency for sure.

On the other hand -- if President Obama really is a homophobe, perhaps he'll veto it anyway -- consequences be damned. Obviously McCain (the OTHER guy who ran for president the last time around) doesn't care what the majority of Americans think.

Maddow is right: By going about it the way he did, Obama has set this in stone as much as anything can be. Politics is a long march. Sometimes I think that the only person who grasps that is the President of the United States.