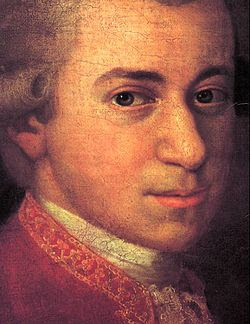 219 years ago today, the supreme genius of music, Johannes Chrysostomus Wolfgangus Theophilus Mozart died at the age of 35, leaving the world too soon, but leaving us with over 600 works.

I have so many favorites--among them, his operas, concerti, symphonies, divertimenti, incidental music, etc.

Last Friday afternoon, I was at a performance by the Boston Symphony Orchestra where I heard his sublime violin concerto #3 performed by the astounding Nikolaij Znaider.

Here is the last piece of music he worked on, but did not finish, the terrifyingly beautiful "Requiem."

These two movements "Confutatis Maledictus" and "Lacrimosa" are two of the most compelling pieces from that work, and are fitting to commemorate Mozart's genius.

Ironic that his last unfinished work before he died was a requiem.

The man, from what I've read, while perhaps not as over-the-top as depicted in Amadeus, he still had his moments.

From Wikipedia:
Although some of the canons in the 1788 set have serious (that is, religious) lyrics, K. 559 was evidently meant entirely for fun. The work features two bilingual puns and some scatological humor. The lyrics are—ostensibly—in Latin, though as they are given in sequence they do not make sense in this language:

The humor of the work consists of hearing these words instead as vulgar phrases of German and Italian.

The German pun is based on the strong Bavarian accent of the tenor-baritone Johann Nepomuk Peyerl (1761 – 1800), who can be presumed to have been the lead singer in the first performance. As Jean-Victor Hocquard points out, the pseudo-Latin lyrics lectu mihi mars, as Peyerl would have sung them, resemble Bavarian German leck du mi im Arsch, which in a literal English rendering is "lick thou me in-the arse". More idiomatically, the phrase could be translated, "kiss my arse" (American English "kiss my ass").

The second pun in the canon is based on the single Latin word jonicu. Winternitz (1958) explains that when this word is sung repeatedly and rapidly, as in the canon, its syllables are liable to be heard rearranged as a taboo word of Italian, cujoni, which means "testicles" (cojones)

So perhaps he would have appreciated the following. (Or perhaps not...)

Last month I saw "The Magic Flute," performed by Berklee College students. Another one of Wolfie's fun pieces. The Masons were upset when they saw it because they claimed too many of their secret traditions were exposed.

According to what I've read about Mozart, he had a very well developed sense of scatalogical humor.

Curses on F. Murray Abraham for killing him.

Of course that was all Hollywoody nonsense to get people to come see a movie about a composer. It was also absurd to believe that the movie version of Mozart's wife, Constanze, would have been so disrespectful to Leopold Mozart. Not believable at all.

And it was FX Süssmayr who completed the unfinished Requiem, not Salieri.

Anonymous said...
This comment has been removed by a blog administrator.
December 6, 2010 at 3:19 AM

Once when I was in Mexico, a pastor friend of mine told me he wanted to watch a movie with me.

He was all excited because this new movie had just been sub titled into Spanish.

He went out, rented the movie, returned home and proceeded to put on "Amadeus."

But before the movie got started, he turned off the sound to his television.

When i asked him why he did that, he said listening to English and reading the sub titles was too confusing, so we had to watch it with no sound.

He never knew there was such good music in the movie until I explained it to him....