SARAH PALIN: "A CLOWN SHORT OF A CIRCUS" 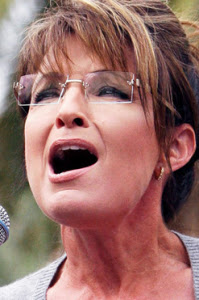 This blog has criticized Sarah Palin numerous times and will continue to do so.  She's running for president of the United States of America, has said she could beat President Obama, therefore, we will treat her like any other candidate and report what she has to say, along with what others on the internet have to say about her.

"Sarah Palin has made it to the big time; she’s now being called out by international media. Yesterday, the Russian newspaper Pravda (this same paper has been quoted in numerous Right Wing publications when it criticized President Obama, and was considered a paper of merit at such time) eviscerated Sarah Palin for her unrelenting attacks upon the democratically elected President, at a time when America needs to stand together, united. When members of the International Press call Sarah Palin out for her lack of American patriotism, it’s time for the American Press to pay attention. It’s about time someone did."


Spankin' Sarah Palin: A clown short of a circus

"I have already called Sarah Palin a pith-headed bimbo from the back of beyond, in this column. I shall now go one step further. By attacking the democratically elected President of the United States of America at a sensitive time in her country's history, she shows the tact of a boorish drunkard bawling obscenities at a funeral.

Sarah Palin is not some kind of a massive political joke in the USA, wheeled out to liven up the political scene from time to time with nonsensical and pastiche (one hopes) displays of sheer and utter ignorance, then it is worrying. It is even more so if anyone other than a manic depressive suffering from a chronic lack of lithium takes this...female...seriously.

Hockey Mum Sarah ex-Governess of Alaska is famous for her shrill shrieking style, displaying a pitifully shallow persona which one hopes is stage-managed to give the rest of the world a good chuckle at the Americans' ability and unique quality to make fun of themselves, a real-life female version of Homer Simpson-cum-Belching Barney at Mo's, giving us ever-more hilarious soundbites as she sets herself up as the dumbest woman on Earth.


Just occasionally, one encounters a bar-room idiot whose party piece is belching loudly before falling backwards off his stool, bouncing off the floor on his backside with a background provided by guffaws of laughter, yet who winks knowingly as he is carried out with his feet scraping along the ground and says "Don't worry son, most of it is an act".

The act. It reminds one of Marilyn Monroe putting on the act of the dumb blonde. But an act it was, a character projected by a shrewd, intelligent and charismatic woman with the ability to invent a persona. Sarah Palin, however, is the real-life thing. And it is becoming patently obvious that it isn't an act.

Sarah Palin, the one famous for ludicrous statements such as "I want to help clean up the state that is so sorry today of journalism. And I have a communications degree"; she is after all someone who "must have lived such a doggoned sheltered life", Sarah "We're all Arizonans now" Palin, cracking down on immigrants when the US of A is after all a country formed by...whom?

And now she turns not only against the fibre and backbone of her country, but against its democratically-elected President, accusing him of being incompetent for not stopping Wikileaks. Where was she and where was her GOP before and during the 9/11 attacks? She accuses President Obama of not taking "steps" to assure the leaks were not published. What "steps"?

Sinister Sarah Palin then goes on to insinuate that she is an advocate of cyber terrorism, questioning "Did we use all the cyber tools at our disposal to dismantle WikiLeaks?" Surely a more sensible question would have been why the material for the leaks was provided in the first place...and this has nothing to do with President Obama, but indeed speaks volumes about the State apparatus itself which goes beyond party politics. Her question also speaks volumes about her own inability to perform logical and strategic thinking.


President Obama after all knows the difference between North and South Korea, he knows that Hawaii is the largest US island and not Kodiak and he does not use the expression "refudiate".


If anything is a threat to the national security of the United States of America, it is this screaming, unrefined oaf with as much class as a searing release of flatulence followed by hysterical giggling at a state banquet. Is this what the people of the USA deserve?


To attack the President of the country at a time when the USA needs to close ranks and stand together to consolidate the enormous strides his intelligent and respectful approach has achieved in building bridges, when her party's period in government bombed them, Spankin' Sarah Palin comes across as a pitifully inadequate anachronism from the times of the Far West.


The United States of America has evolved. She has not."

You bet-cha. I really feel the imbecile's days are numbered. She's just too dumb to know it.

I linked to that blog. I'm familiar with the name - maybe from seeing it here - but I don't know anything about them. Their link to "about us" doesn't work. You have some info you can share?

I can't figure out why the link doesn't work.

I did read some of the comments on the link and found this one interesting:

"Having watched Palin for more than 2 years, this is offered as an observation, not as a diagnosis. The primary defining characteristic of a sociopath is being the victim. Other characteristics of the sociopath include inability to accept blame for one's mistakes; gas lighting, which is engineering the discrediting of others, e.g. firing or getting fired those who do not agree with your opinions or political views; lying; feeling one is deserving of special favors; feeling that rules are for others but not for themselves ; and using others, including family , as tools. Read "the sociopath next door: The Ruthless Versus the Rest of Us," by Martha Stoudt, Ph.D., Crown Publishing, 2005, hardcover; Broadway, 2006, paperback. Wake up, those of you who are in denial, those who are not paying attention, or those who are following Palin because she "says" she is pro-life. She is in this for power, money, and pay back."

Imagine this nut as president.

I ran across her reality show the other night and decided to force myself to watch. No, I wasn't drinking that inch in the whiskey bottle. My observation is she is not worth anything outside her small town. I think she forced her family to participate in this. Every one of them can hardly mask theiri total disdain for what they are forced to do to appear loving, motivated and ordinary folks. Her husband must be getting paid by the word, for he had many more "talks" for he camera than even she did. I keep trying to find a reason for her popularity. I cannot find it.

Maybe all her enthusiastic viewers are drinking the last inch of whiskey in their bottles.

The half term governor is a “Dan Quayle” in heels. Since we already had an idiot “W” that caused our current economic debacle, America knows not to trust in fools who think they are brilliant. One of the reason for “W” failure was his drinking, Palin just has bad genes.

Just wait till her husband is on Dancing With The Stars next season...

...this gravy train that the whole family is riding is way too lucrative to give up for a real job...

Not to worry. Even if she were to receive the Repub nomination (which she likely will not) she wouldn't win the general without the moderate vote.

She does not poll well with moderates...that will likely not change.

So unless conservatives identify a strong credible candidate I fear we are in for another Obama term and the progressives will have won the day... so to speak.

Her followers unconditionally adore her and are blind to lack of knowledge of any foreign or domestic issues. All she knows how to do is nip at President Obama's heels--and the First Lady's,--without formulating any solutions to this country formidable problems. To her, this is statesmanship--posting on Twitter and facebook. But her fans lap it up.

Dan Quayle at least had spent time in the US Senate. Palin was the mayor of a village, and half-term quitting governor of the smallest populous state in America, and she quit the chairmanship of the Alaska Oil and Gas Conservation Committee within a year.

She has a record of quitting jobs with responsibilities. And for the jobs she stuck with (mayor of Wasilla) she left that place millions of dollars in debt.

But her fans, in 2008, bleated that she had more "experience" than Senator Obama!

I don't believe she'll get the GOP nomination, but her fans are so rabid that they may encourage her to run as a third party--Twitter Party--candidate, then she can tweet her answers in the presidential debates.

Gosh. And I though German political commentary was rough.

As Nietzsche might have put it, never forget that when you gaze into Russia from your front porch, Russia also gazes into you. Clearly they're not impressed.

The United States of America has evolved. She has not.

Well, no. She doesn't believe in evolution.

Who the heck is "cum-belching Barney"?

i think sarah is dumb like a fox. her popularity is quite the indictment on the american education system. any reasonably educated person should be able to see her for what she is, a huckster.

"Who the heck is "cum-belching Barney"?"

Makes me glad I stopped giving to PBS.

Anonymous said...
This comment has been removed by a blog administrator.
December 4, 2010 at 1:46 PM

Anonymous said...
This comment has been removed by a blog administrator.
December 4, 2010 at 5:12 PM

As a Lord it is my chivalrous duty to try and defend Mrs. Palin from one of these attacks by the Ruskie.


Friends; who among us hasn't giggled hysterically after a searing release of flatulence at a state banquet?

Now let that be a lesson to all of you.