Because nothing says Happy Birthday, Jesus! like a KKKlansnowman holding a noose! 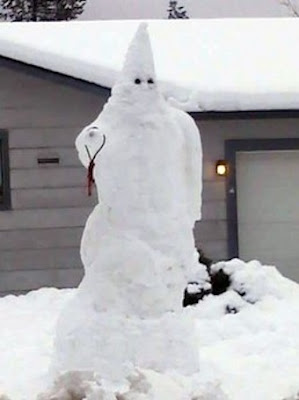 But "Happy Holidays!" is a threat to everyone!
Posted by Shaw Kenawe at 5:49 PM

""There's nothing hateful about it that I can see," he told KXLY TV. Asked why his neighbors complained, Eliseuson replied, "Hell if I know. They wanna cause trouble." ...
"The city of Hayden, in northern Idaho, is not far from the former headquarters of the neo-Nazi Aryan Nations group. Neighbors have been enraged before by Eliseuson, according to AP and KXLY reports. On Halloween, he passed out bullet casings after he said he ran out of candy."
...and Sarah Palin came from this state too.
You Betcha. No surprise the spud state is one of the most Republican, is it? *sigh*

I posted on it only to remind us all that we still need to do more to expose the crazies in our society.

They are NOT only in Idaho.

But "Happy Holidays!" is a threat to everyone!

Curiously enough, several times I've heard people object to being told "Happy holidays" -- often quite vociferously and rudely. I've never heard anyone object to "Merry Christmas", not even once. All the hostility in that "conflict" seems to be on one side.

"Holiday" is from the root "holy." Hence when one wishes people Happy Holiday, one is saying in essence, Happy Holy Day.

But the dimwits who object to it are objecting because Bill O'Reilly told them to, not because they have any understanding of what "holiday" means.

How easily duped are the masses. And how eagerly FAUX NOOZ exploits them.

i find nothing hateful about the use of the phrase, "happy holidays" unless it is an attempt to take away from the underlying meaning of Christmas as some would like to do or demand, in a passive manner, its use in order to promote a belief in opposition to someone's religious beliefs.

both are examples of the lack of religious tolerance.

The rebirth of Senator Byrd in ice crystals?

"both are examples of the lack of religious tolerance."

And here I thought they were polite seasonal salutations. You learn something new every day.

Couer d'Alene is a lovely town located near the Aryan Nation nonsense. The people there are known for repudiating the AN.

This anti-"Holiday" business was started by FAUX NOOZ to get people O'riled up. I never heard anyone object to Happy Holidays as a way to acknowledge our Jewish family and friends' December holiday that usually coincides with the Christians' holiday--as does Kwaanza. And many nonbelievers participate in the secular side of Christmas--the coming of the Solstice, so "Happy Holidays" is an appropriate greeting for us as well.

Instead of welcoming more people as fellow celebrants at this time of year, FAUX NOOZ instructed its listeners to be outraged so that they could get more angry people to watch their execrable fake "War on Christmas."

There is none, there never has been.


Happy Holidays to all.