McCain: "I have faced tougher adversaries."


WASHINGTON (AP) — President Donald Trump on Tuesday issued a warning shot after Republican Sen. John McCain questioned “half-baked, spurious nationalism” in America’s foreign policy. Trump said in a radio interview with WMAL in Washington that “people have to be careful because at some point I fight back.”

The president added “I’m being very, very nice but at some point I fight back and it won’t be pretty.”

McCain, a former Navy pilot who spent 5½ years in a Vietnam prisoner of war camp and is battling brain cancer, offered a simple response to Trump: “I have faced tougher adversaries.”


#45 threatens John McCain: "You better be careful; I fight back."


#45 was heroically avoiding the draft while John McCain was being beaten every day by the enemy while in a POW camp in Vietnam.

#45 bragged to Howard Stern that he was getting laid so often during the Vietnam war that he called it his "own personal Vietnam" because of his fear of catching an STD.

Trump:  "Vaginas Are ‘Landmines … It Is My Personal Vietnam’ "

#45 is too stupid and too malignantly narcissistic to understand that the American people know all about his craven boasts that make him look like a weak, ridiculous strutting chicken, threatening a real man who faced a real enemy, not some puerile, pussy-grabbing coward.

Who are the people who still support this repulsive worm? 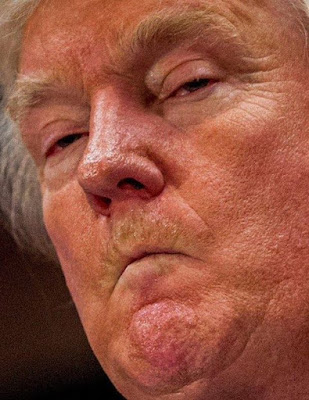 John McCain has brain cancer. What the hell will that POSPOTUS threaten him with that's worse than that? Whaat an ignorant bastard.

To them these folks are traitors to the cause, RINO's and are to be destroyed. Period.

The way they are treating McCain is disgusting.

John McCain, a true American hero, mocked by the President of the United States. I never thought I'd see anything like it.

Just when I thought tRump couldn't sink any lower he proved me wrong, in spades.

Shaw, don't know if you saw today's Michael Gerson. He has a nice column on the immoral minority.

Kevin, Gerson nails the current Christian right as idolaters, for what they practice in pandering after #45 is idolatry. There's nothing Christ-like about them. They are, in fact, Trumptians. And they are disgraced because of it.

Dave: "John McCain, a true American hero, mocked by the President of the United States. I never thought I'd see anything like it."

#45 is truly a mentally deformed human. As Clearwater noted, what sort of human threatens a man who's facing brain cancer? I'll tell you: A monster.

Clearwater, Does anyone really think #45 remembers what McCain is facing? All the little worm remembers is that McCain said something that hurt his fragile ego, so he lashed out and threatened him.

It will be the happiest of happy days in America when that little worm is knocked off his egotistical pedestal and brought low by the righteous.


When did John McCain become a darling of the left?

I'm a leftie who disagreed with McCain's policies and his choice of a running mate, but I never, ever questioned his patriotism or his courage. Someone from his own party did that: Trump -- he chickenhawk who called his fear of vaginas and getting STDs while he was screwing around during his deferments his own "personal Vietnam." Repulsive and cowardly.

John McCain will be remembered as a hero and a patriot.

Trump will be forever remembered as a worthless pile of bloated human flesh.

"repulsive worm" I like that. I'll have to remember it when I describe tRump. It's really mean, tho, to the worms.

I agree with you Shaw regarding McCain. Shows how awfully rigid and narrow minded some folks on the right are. Can't even admire aspects of someone from the opposite party without the hard right claiming that person is the new darling of the left. I remember years ago McCain and Ted Kennedy (who were friends) had their own radio spots (here in the DC area), respectfully discussing a piece of legislation from both political spectrums. Lordy do I miss those times.

I’ve never been a big fan of John McCain. But when Trump starts insulting him for things that McCain has done or said that I agree with, I start getting pissed off. Trump’s threats are those of a 12 year old bully on the playground, not the threats of the President of the United States. He is an embarrassment to all of us...even his supporters.

He should be impeached for pure incompetence.

possumlady, I remember that too -- McCain and Ted Kennedy having been friends. McCain also was friendly with Hillary Clinton, and he respected her. It is deplorable to hear a POTUS go after one from his own party, but it's especially nauseating when that person is dying of cancer. Trump has no empathy for anyone, which makes him so dangerous.

Jerry, Trump makes himself look weak with his threats against a dying man. He's cruel and stupid, a dangerous combination in one with the sort of power he has.

U.S. President Donald Trump told U.S. Army Sgt. La David Johnson's widow Tuesday that "he knew what he signed up for ...but when it happens it hurts anyway," when he died serving in northwestern Africa, according to Rep. Frederica Wilson, D-Miami Gardens.

"Yes, he said it," Wilson said. "It's so insensitive. He should have not have said that. He shouldn't have said it."

The president called about 4:45 p.m. and spoke to Johnson's pregnant widow, Myeshia Johnson, for about five minutes. She is a mother to Johnson's surviving 2-year-old son and 6-year-old daughter.

What a heartless S.O.B.!

Donald J. Trump ✔@realDonaldTrump
Democrat Congresswoman totally fabricated what I said to the wife of a soldier who died in action (and I have proof). Sad!
7:25 AM - Oct 18, 2017

Donald Trump is a liar. I believe the congresswoman, not the proven liar.