Here's what happened in Oregon today: 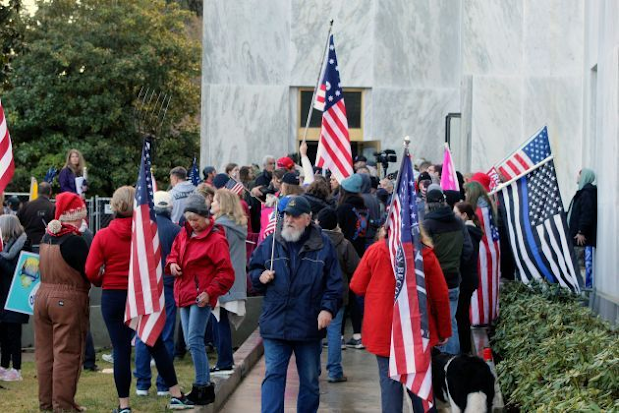 "According to the Oregon State Police and multiple media reports, a group of armed protesters broke windows and stormed the capitol while the state legislature was in session on Monday. Legislators were debating Covid-19 restrictions and related public assistance in closed session.
The only people permitted inside the building were members of the Salem Police Department and the Oregon State Police as well as lawmakers, staff and reporters. The protesters, many with flak jackets, military helmets and some carrying long guns with multiple magazines, entered the capitol building at about 8:30 am.
According to Salem PD, “at least one of the protesters used chemical agents on the police…OSP [Oregon State Police] used inert pepper ball, while dealing with these protestors.”
At 10:30 police had gathered in sufficient numbers to push the crowd out of the building. It was then that “another individual used bear spray against police officers,” according to an OSP statement. “He was arrested on multiple charges including trespassing and assaulting a police officer."
Nick Knudsen

@NickKnudsenUS
Right wing thugs intimidated and threatened journalist
@_Brian_ICT
- for trying to cover their unlawful assembly at the Capitol in Salem, Oregon today. They tried to storm the Capitol with pistols and rifles in protest of COVID-19 restrictions.
Nick Knudsen

@NickKnudsenUS
·
22h
Just before their violent physical assaults on journalists, the right wing extremists literally tried to kick in the door of the Oregon State Capitol in Salem.
Posted by Shaw Kenawe at 4:31 PM

As the pressure of trump's great LOSS builds in trumpers all across America rightwing stink morons will continue pushing the boundaries. Until eventualky violence erupts and death follows. And the trumpers will strut proud.

The line between looting by "thugs" and terrorism by "armed insurrectionists" apparently is huge for the MAGA crowd.

Where are the "Law and Order" Republicans now? Still watching the classic reruns?

One right-wing blog I sometimes look at did report it.

Here's what I found on that blog:

"That bitch Kate Brown needs to rethink her tyrannical ways.

A little public rabble rousing on their front door may just be the preliminaries….

I would have given five bucks to see the look on that Commie bitches face when she was told that there was a crowd of pissed off Patriots out on the front steps asking for her whereabouts."

Yes. They reported it and were proud of their lawlessness. The right wing white supremacists and anarchists promote mayhem and violence in our American cities. Trump's legacy.

There were quite a few 'tier 2' news outlets that reported this. But your post was the first I'd heard of it.

BTW, I'm going to use this as a lead-in story tomorrow to another story I found with this. Thanks in advance.

Glad to you stopped by, Mike.

And I’m happy to be a bit helpful to your blog, since I get such a good laugh from the funnies you publish. And that sure means a lot to me during the dark times we’ve been going through.

"if the right wing bloggers and news sites will cover this" Conservatives asked that question for years regarding all things left.

It is good to see our inept elected elite pass a stimulus bill that provides for a new museum, makes illegal streaming illegal, provide for a study in pakastan and a policy on the dalai lama. As everyone would expect madam speaker gave the members a few hours to read the bill before they had to vote. This does remind us of the disaster health care bill she pushed through and like that bill the stimulus bill does little for the people.

Time to send A note to your grand kids that their corrupt politicians just added to their debt so people could get $600 and that their representatives didn't do their job. This is not based on which side of the political sewer you stand but what is right for the country.

Maybe they were Leftists? That's what Minus said about those involved in the plot to kidnap Gretchen Whitmer.

Derv, Minus is in his own little conspiracy nut world.

skud, you are aware, aren't you, that many of the things in this stimulus package were in Trump's budget?

Good on you Mr. President.... Now if the spineless GOP will stand for the things they say they believe in maybe we can get some changes

Ms Shaw, Then why call it a stimulus bill and not what it is, a Pork Bill. Massive amounts approved for Massive projects many in foreign countries that have little to do with helping the American worker who is suffering because of our incompetent elected elite. We do have the most corrupt politicians in the free world. Tulsi stood up and called it what it was, a slap in the face to every American. Botox nan got her pork and the American people got crumbs.
Blame who you want for our issues but look at congress first and you don't need to look much farther.