The shameful legacy Trump leaves behind.

Among the convicted felons and murderers Trump pardoned, was the monster who murdered this child: 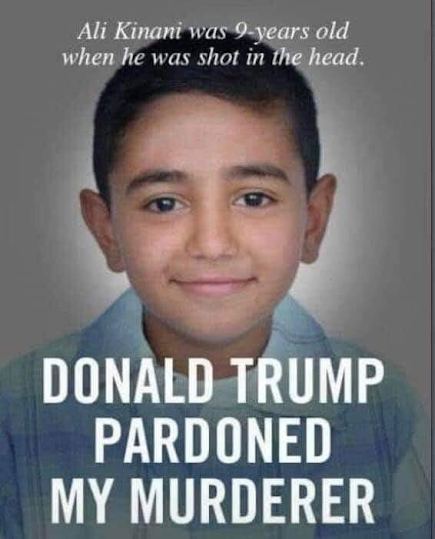 Trump pardoned the people who not only gunned down a crowd of civilians/non combatants if you will, in Iraq, but were tried in a court of law, found guilty and sentenced.

But there's nothing to see here. It's just another day in the lives of the "law and order for thee but not for me" crowd. Where are those people today demanding justice for the victims? For the loss of a child's life? For the dishonor it brought to US Military services? For our diminished standing in the world?

As we wind ever closer to the final curtain of the Trump Administration, the president is placing layer upon layer of disrespect, problems and worldwide disgust towards America in a way we have not seen in years, if ever.

And yet people will be crying when Joe Biden takes office on Wednesday, January 20 not out of joy, but because the person who made all of the above possible will no longer be able to torment his own country.

Meanwhile, the president who never waits a minute to opine on the race, motive and religion of overseas terrorists, is once again silent when that terrorism hits close to home. The president, who calls into question the patriotism of all black Americans when he indiscriminately tars black athletes for silently protesting, has had nothing to say to help America heal after the latest domestic terrorism events in the US.

Mr President, do you have any words on a man who blew up a city block in deep red Tennessee? In Nashville, one of our great America cities?

Do you have anything to say about the active duty Green Beret who killed 3 people the day after Christmas, at a bowling alley?

Is it unreasonable for us leftie liberals to ask why a president pardons convicted war criminals, killers of children, but can't even offer a comment on domestic terrorism meant to wreck havoc on the American people during the Christmas holidays?

There have to be more charges they can come up with to put that asshole back in jail.

Mike, it's stomach-turning and so typically Trump. He loves murderers and felons. In fact, he surrounds himself with them.

Dave It's been 3 days since the Christmas morning car bombing in Nashville, and Trump has nothing to say to the public about it. He's too busy golfing and trying to commit sedition.

And then there's this:

Nothing like quoting a murderous thug to make a point about overturning an American election, is there.

It's become obvious that the Trumpublican party care nothing for our American democracy.

A video President Trump tweeted today features the Nobel Peace Prize superimposed over photographs of him with the prime minister of Israel, and the foreign ministers of Bahrain and the United Arab Emirates.

A REMINDER: The president has not been awarded the Nobel Peace Prize.

The most pathetic thing is that he wants to be awarded the Nobel peace prize for "negotiating" "peace treaties" to "bring peace to the Middle East"...between countries that a) have never fought a single war and b) don’t include the parties that actually are at war.

Trump is eaten up by the fact that President Obama was awarded a Nobel Peace Prize and he will NEVER earn one. It eats his tiny little turnip of a heart up. And this display show the world what a jealous little teenager he is and always will be of anyone who is far, far better at everything than he is.

It's really hilarious to see a grown man act like such a prissy little jealous mean girl.

We can continue belaboring all that we know about the crime family that has has ran roughshod over American democracy for the last four years, or, we can turn our efforrs to healing the thousands of open wounds tRump is gleefully responsible for.

The nation's future rests in the hands of a people now at ideological war with each other. A people apprently incapable of recognizing what it is that is really happening to the nation our founders handed us to preserve and protect. That what it is is a very big thing. It is called COMPROMISE to acheive the greatest good and the greatest liberty possible for ALL people in a civilized society.

The choice is ours. The prospects are actually quite dim.

RN: "The prospects are actually quite dim."

I've already read that McConnell is promising to stymie and sabotage anything Biden does to help the economy so that the Trumpublicans can blame his administration for the economic pain and get the House back in 2022.

It is Mitch McConnell more than Trump, I believe, who is responsible for most of the mess this country is in. Trump just makes it worse with his lying, cheating, and fraud.

Remember, it was a cabal of GOP pols who vowed to obstruct and sabotage EVERYTHING Barack Obama tried to do while he was president. And they did.

So, yes, "the prospects are quite dim."

Being honest Shaw, I can only agree with you. Unless Ossoff aNd Warnick (spelling?) both win a senate seat Biden/Harris, as well as the entire nation, are screwed. The Biden adminisrration will be hamstrung as Moscow Mitch the bitch NcConnell will obstruct, obstruct, and obstruct some more. Just as he did during President Onama's last six years.

America will undoubtedly be a much better place if McConnell loses his next race. He is, as you pointed out as bad if not worse than The Orange Turd. He's smarter, craftier, and just as deceitful.