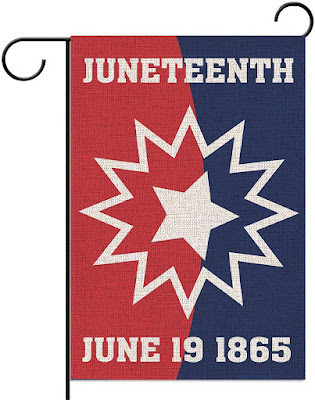 "President Biden, having returned to the White House from his first trip abroad as president...sign[ed] into law a bill creating a federal holiday to commemorate Juneteenth, the day marking the end of slavery in Texas. Because June 19 falls on a Saturday this year, most federal employees will get this Friday off."
From the National Museum of African-American History and Culture:
On “Freedom’s Eve,” or the eve of January 1, 1863, the first Watch Night services took place. On that night, enslaved and free African Americans gathered in churches and private homes all across the country awaiting news that the Emancipation Proclamation had taken effect. At the stroke of midnight, prayers were answered as all enslaved people in Confederate States were declared legally free. Union soldiers, many of whom were black, marched onto plantations and across cities in the south reading small copies of the Emancipation Proclamation spreading the news of freedom in Confederate States.
Only through the Thirteenth Amendment did emancipation end slavery throughout the United States. But not everyone in Confederate territory would immediately be free. Even though the Emancipation Proclamation was made effective in 1863, it could not be implemented in places still under Confederate control. As a result, in the westernmost Confederate state of Texas, enslaved people would not be free until much later.
Freedom finally came on June 19, 1865, when some 2,000 Union troops arrived in Galveston Bay, Texas. The army announced that the more than 250,000 enslaved black people in the state, were free by executive decree. This day came to be known as "Juneteenth," by the newly freed people in Texas.
THESE REPUBLICANS VOTED NO! TO MAKE JUNETEENTH A NATIONAL HOLIDAY: 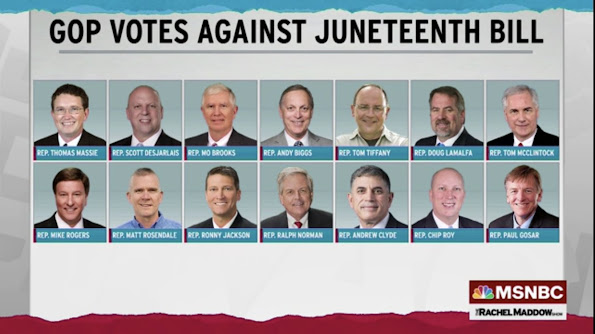 They've decided to set up their 'big tent' in the dog bed for a tiny chihuahua puppy. Sorry, no room for minorities in here! Just us white christians need apply.

This comes at a time when these same Republicans claim discrimination no longer exist. So let this ongoing national Holiday remind all Americans of the truth of our past and to help stop future discrimination of all minorities. We need this Holiday as much as we need the 4th of July Holiday.

We suppose the good news would be these Neanderthals won't be around forever. The concern is there are millions like them.